During the roaring '20s, the American Museum of Natural History conducted a series of successful expeditions to the Gobi Desert. After 1930, political changes in Mongolia rendered the Gobi's fossil treasures inaccessible to the West, but scientific research continued. First Soviet, then Polish-Mongolian teams ventured into the Gobi in search of dinosaur and mammal fossils. In contrast to Western Bloc countries, Polish paleontology in the 1950s and 1960s was led largely by women.

From Hunting for Dinosaurs by Zofia Kielan-Jaworowska, who is pictured at left

In 1966, an article in Time Magazine recounted some of the booty from a few summers in the Gobi, namely 35 tons of fossils. Included in the finds were the oldest complete mammal skulls yet recorded, entire or nearly entire skeletons of 11 dinosaurs, and a 65-foot sauropod. The paleontological treasures were described at a paleontology conference in Paris by the expedition leader of the Polish-Mongolian team: Zofia Kielan-Jaworowska.

Kielan-Jaworowska served as a medic in the Polish resistance during Nazi occupation. She also took classes at the University of Warsaw — a gutsy move considering the fascists had banned higher education, willing to impose the death penalty on anybody they caught. She later recounted the terrifying period of her life:

The official aim announced by Adolf Hitler and his accomplices was the extermination of most Poles, with the rest (those who could "count to 500, sign their name, and not necessarily be able to read") turned into German slaves. . . . Systematically, block by block, and in cold blood, the Germans blew up and burned down my city. Intense evil guided this job. The result was more than 200,000 murdered civilians, the total destruction of 85 percent of Warsaw, and the expulsion of all the surviving inhabitants. . . . But in December 1945 the university reopened.

It was at the University of Warsaw that she first heard about paleontological expeditions to the Gobi, in 1946. Just 16 years later, much to her pleasant surprise, she was organizing Polish-Mongolian expeditions to the Gobi. (Kielan-Jaworowska first visited the Gobi herself in 1964.) The fossils she described in Paris in 1966 were only part of what the Polish-Mongolian team found. From 1963 to 1971, these expeditions unearthed one amazing fossil after another, including sauropods, tarbosaurs (similar to T. rex), duckbilled dinosaurs, ostrich-like dinosaurs, and mammals from the Cretaceous and early Tertiary. In 1965 alone, her team shipped over 20 tons of fossils back to Poland, including the remains of a previously unknown dinosaur with a foot-long claw. But the most spectacular find came in 1971: a Protoceratops and a juvenile Velociraptor tangled in a deadly struggle. How the fossilization process managed to catch these two in the act is still debated.

Despite the dinosaurs she and her team found, they were not the main focus of Kielan-Jaworowska's research. From 1949 to 1963, she concentrated on Paleozoic invertebrates, especially trilobites — three-lobed water bugs among the oldest fossils commonly found. In 1963, the shifted the focus of her research to Mesozoic mammals — the furry little creatures scurrying around showier dinosaurs. 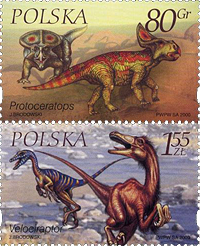 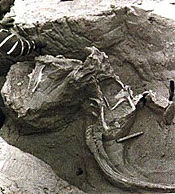 From The Reign of the Dinosaurs by Jean-Guy Michard

In addition to numerous monographs describing fossil finds, Kielan-Jaworowska wrote a wonderful book entitled Hunting for Dinosaurs describing her adventures thus far. (The English version of the book was published in 1969.) In it, she described yurt hotels, vehicle breakdowns repaired by multi-talented Mongolian drivers, campfire songs, biting flies, swarming mosquitoes, venomous snakes and spiders, sandstorms that darkened the sky as fast as eclipses, temperatures over 100°F and rewarding work. As if anticipating both the asteroid impact theory of dinosaur extinction and society's growing ecological awareness, she explained why the extinction of the dinosaurs was so puzzling, and finished the book by observing that the study of mass extinctions might well improve our own future.

Amid the tensions of the Cold War, Kielan-Jaworowska walked a delicate path, collaborating with Western Block researchers decades ahead of glasnost. Her dinosaur-hunting book exhibited the same international appeal as she did. The book mixed tact — giving credit where it was due to both her Soviet and American predecessors — and humor. She included a report from a colleague who recounted that one evening the Mongolian hosts serenaded the Poles with beautiful songs, then insisted their guests reciprocate. "It turned out that singing was not exactly our forte, and the only songs we could execute passably in chorus were Christmas carols," her colleague explained. "When requested to translate the words, we got out of the difficulty by claiming they were old revolutionary songs."

Kielan-Jaworowska must have loved her work. The same summer that her team found the Protoceratops and a kick-boxing Velociraptor, a sandstorm left her with a ruptured eardrum. She went to Warsaw for surgery then went right back to the Gobi and kept working. Years later, she "retired" then kept working. She died on March 13, 2015, just several weeks shy of her 90th birthday. Richard Cifelli, a longtime collaborator, wrote her obituary in Nature, remarking, "Her style was, at times, unapologetically exacting — an apprenticeship with her was akin to martial-arts training with a Buddhist monk — but she pushed the rest of us to reach for better science. We will miss her."