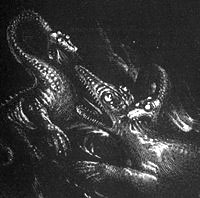 Illustrations from Scenes from Deep Time by Martin J.S. Rudwick

And the Principle of Life, pure from the Elysian Fount, throbbed through all her Frame, quivering with love: Her Reeds were sturdy trees, her Ferns umbrageous Forests, sheltering and subsisting ten thousand Colossal Mammifers, a fauna that would eat up the present lapsed and sterile World, and strip it utterly bare.

If you have trouble making sense of that statement, don't assume that's because it was written in the early 19th century and your 21st-century sensibilities are necessarily lacking. Plenty of readers of the early 19th century couldn't understand it either. Science historian Ralph O'Connor categorizes Hawkins's writing to the "hyper-Miltonic" school of 19th-century poetry. The wordy, slightly suggestive passage comes from Thomas Hawkins's The Book of the Great Sea-Dragons, Ichthyosauri and Plesiosauri published in 1840. Hawkins had published another book on "sea dragons" several years earlier, and he had only gotten weirder.

Thomas Hawkins was the son of a farmer who encouraged his interest in geology by giving him enough money to purchase fossils. Hawkins made himself into a capable fossil preparator, whose skill at preparation was exceeded only by his pugnacity and purple prose. In his books, he chose illustrations to match, like these by John Samuelson (top) and John Martin (bottom). Gideon Mantell once described Hawkins as "a very young man who has more money than wit."

Like many of his colleagues, Hawkins combined a belief in scripture with acceptance of life before Adam and Eve, yet his view of the pre-human world was hardly cheerful. He believed the Earth was alien — not just home to some life forms unlike anything living today, but a world bathed in darkness.

Pursuing with Science, Matter subjected to Supernal Light through its early mechanical and organised. . . . Hence, coupling supernal Light, excessive heat, and the atmospherical Consequences of both together: it is not too much to say, nor for Philosophy to concede that the Light of the Sun (if it existed then at all, which is doubtful,) could not penetrate that atmosphere, nor subdue that other Light, and that it had no conceivable use upon our Planet before those Creatures were brought forth to whom alone it could be of any the least value, and without which indeed, they could not live.

He envisioned a planet sweltering under a sunless sky crawling with monstrous animals. Hawkins never accepted Charles Lyell's theory of uniformitarianism, perhaps because a long history of epic calamities appealed more to his nature.

And he believed this ancient world was populated by giants.

[W]e shudder over the old Spectral World, when armed with poison fang, and fury, then thousand hideous monsters: slipped from leash, shriek to the Four Winds, and scare peace for ever away. The Malefactor Adamites, gigantic in the Fall, so were the grim Brutes giants which battled with them for blood.

Hawkins referred to the "saurians" he studied as the "Jews of Creation, alone in the actual world" and argued that Latin and Greek were wholly inappropriate languages for their scientific names. Instead, he said, "blessed Hebrew" should be used to name them.

Acquaintances tolerated Hawkins's quirks because of his outstanding fossil collection, and he was willing to do anything to promote the idea that his fossils were the best. He may have completed many skeletons by inserting parts from other specimens. By writing both of them separately and confidentially, Hawkins hoodwinked Gideon Mantell and William Buckland into assessing his collection at similarly high values. Buckland then naively wrote the British Museum recommending that the institution purchase the collection, offering Hawkins's "beautifully and most accurately" engraved volume as a catalog. The British Museum's trustees took Buckland's advice. 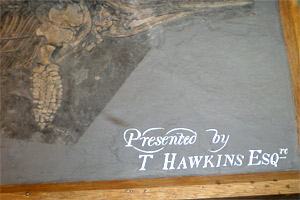 Credit to Hawkins for an ichthyosaur fossil at the Sedgwick Museum, Cambridge. Photo by Michon Scott.

Charles König, Keeper of Natural History at the British Museum (who had no voice in deciding whether to purchase the Hawkins collection), was an overworked but dedicated and uncomplaining man. Just before Hawkins's 25-foot ichthyosaur was to be put on display in 1835, König gave it a careful inspection. It looked perfect. It looked too perfect, in fact. König consulted the catalog and discovered that the very real-looking right forefin was merely outlined in the catalog, indicating it was missing. Much of the ichthyosaur's tail was absent from the catalog's version, too. The "fossil" before König's eyes was largely plaster, though the museum had been led to believe it was entirely genuine bone. König notified Buckland and Mantell, then the museum's trustees. Unfortunately for everyone involved, the scandal even reached the British House of Commons. The final solution — one that Hawkins complained about bitterly — was to paint the plaster parts a different color to distinguish them from the fossil bone, a practice fairly common in many natural history museums nowadays.

When the Natural History Museum of London was established, it received many of the science- and nature-themed specimens that had long resided at the British Museum. Twenty-six of the marine fossil reptiles currently on display in the Natural History Museum of London were originally sold to the British Museum by Hawkins. Another ichthyosaur fossil donated by Hawkins can be seen at the Sedgwick Museum of Earth Sciences in Cambridge.

Something about Hawkins that a modern reader could appreciate was that, while several gentlemen geologists who worked with the fossil collector Mary Anning were reluctant to credit her by name, he named her — multiple times. Given his tortured reasoning and flamboyant prose, though, his tendency to mention her name might have been a bit of a mixed blessing for Anning.

Hawkins was known as much for his weird antics as for his fossils. He spent his later years fighting with a landlord, defending his strawberry patch (in the words of one historian) "with disproportionate violence," suing, stirring up rival factions among the neighboring townsfolk to incite full-scale riots, and proclaiming himself the rightful Earl of Kent.