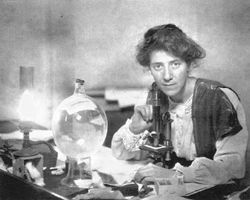 From "Marie Stopes: Passionate about Paleobotany" by Howard Falcon-Lang in Geology Today

I consider I owe my brain power to two factors: the inheritance through many centuries of a long line of cultivated ancestors on both sides, and the exceptional antenatal period when my parents arranged for me.

So Marie Stopes explained her exceptional abilities to an admirer in 1921. Born in 1880 in Edinburgh to accomplished parents — an amateur paleoanthropologist father and literary, suffragette mother — Marie Stopes was in fact a late academic bloomer. Her mother Charlotte initially tried educating her daughters at home, but when that proved unsuccessful, she relented and sent them to school. The young Marie found herself behind her peers but while a more easily daunted child might have sunk into depression, she found encouragement in mundane achievements, like arriving before her classmates, or being appointed hall monitor. By her late teens, she had become a high achiever, regularly impressing her teachers. Stopes enrolled in college, first planning to study chemistry but switching to botany. While her father Henry was dying of cancer, she brightened his last days with news of her academic achievements.

In 1903, Stopes was studying and working under the supervision of Francis Oliver, a botany professor at University College London. The timing was fortunate. The prevailing view up to that time held that most plants from the Carboniferous Period (also known as the Mississippian and Pennsylvanian Periods, roughly 360 to 290 million years ago) were ferns. Coal seams, however, sometimes include coal balls: nodules of petrified peat preserving three-dimensional remains. In fact, thanks to coal balls, plant biology from the Carboniferous has long been understood better than that from later geologic periods, which lack similar fossils. The coal balls showed Stopes and others that some of the so-called ferns had seeds. Paleobotanists eventually dubbed them pteridosperms.

Stopes moved on to Munich to work with Karl Goebel and study cycad reproduction, and she became the first woman in Germany to earn a Ph.D. in botany. She also became the youngest person in Britain, at least at that time, to hold a doctorate. In fact, by the time she headed for Munich, just before turning 23, Stopes had already published two papers on fossil plants. Ignoring Goebel's early protestations that a woman couldn't earn a doctorate, Stopes worked 12-hour days and lived in a rented room where water regularly froze in the wintertime. After earning her degree, she returned to Britain and secured a position as a demonstrator in paleobotany. Not surprisingly, the young woman teaching men caused some alarm among traditionalists. Stopes lamented that even women with international reputations were "shut out from the concourse of their intellectual fellows."

Manchester was close to fossil sites rich in coal balls, and Stopes frequently visited coal mines to examine coal deposits in the field. She got to know a number of miners, probably better than many paleobotanists did, but her relationship with coal miners was complicated. Politically, Stopes was pretty conservative, and didn't always agree with the interests of the miners. Years later, when coal miners threatened to strike, Stopes pled with authorities to let her talk to the miners, claiming (perhaps quite accurately) that listening to her impassioned lectures for several hours would convince the miners to give up all their demands. Nevertheless, her offer of assistance was refused.

Stopes eventually switched gears in studying coal to concentrate on its physical properties. Her research contributed to Britain's war effort in WWI, and in 1919, she published a paper coining four terms still in use today: vitrain (brilliant black and glossy), durain (hard and granular), clarain (alternating light and dark layers) and fusain (soft and crumbly).

Stopes's work in paleobotany was overshadowed by a cause that later dominated her life. She became an early and ardent proponent of birth control, and the cause raised plenty of respectable eyebrows. Her dedication to family planning made her an initial friend — and later bitter rival of — Margaret Sanger, who campaigned for the same cause in America. The controversy surrounding Stopes and contraception culminated in a lawsuit she filed in the 1920s against Halliday Sutherland, a Catholic doctor who characterized her promotion of contraception as experimentation on the poor. Stopes lost the lawsuit but won plenty of publicity.

Science and social crusading played out against the backdrop of a messy personal life. Stopes's mother Charlotte alternately doted on her daughter and competed with her. Stopes's younger sister proved sickly and timid, and needed lifelong care. And Stopes's own fierce intelligence was balanced (or not balanced, depending on one's perspective) by a complete disregard for the feelings of others. She could be arrogant, abrasive, paranoid, and sometimes just monstrous.

In 1907, Stopes began an 18-month stay in Japan, ostensibly to study fossil plants, but really lured by a Japanese love interest. By the time she arrived, however, her onetime fiancé had lost interest. He was so intent on getting rid of her without hurting her feelings that he suggested he might have leprosy. Perhaps smarting from that disappointment, Stopes returned to Britain and promptly broke up the engagement of a couple in which the man and woman had both considered her a friend. Her hopes that the male of the pair would then propose to her, however, didn't pan out. In Canada, Stopes met the man who became her first husband. The two became engaged after a brief acquaintance. The marriage was an unmitigated disaster. Stopes exacerbated the trouble by taking in a border, a writer named Aylmer Maude, and flirting with him with abandon. Years later, while embroiled in her legal disputes, she employed Maude to write her biography, while retaining veto power over anything unflattering, including a simple mention of her age. The wet kiss of a biography was a flop — for which she blamed him.

The disappointments in the bedroom of her first marriage prompted Stopes to write Married Love. The book was as popular as it was controversial. Much of the book's advice was needed; an estimated 20 percent of British soldiers returning from WWI had venereal disease, and most advice to women was limited to abstinence. Critics called her book a prostitution manual. If so, it wasn't entirely successful; Stopes euphemized so much that her readers often struggled to understand what she even meant.

A friend suggested a wealthy young man (Humphrey Verdon Roe, an early pioneer in aeronautics) who might help finance Married Love's publication. That wealthy young man became Stopes's second husband — after she broke up his current engagement, that is. Her marriage to Roe was happier than her first marriage, but only for a time. She eventually tired of him, too. She found him especially tiresome after he made unwise investments and lost most of his fortune. Roe was reduced to becoming an unwelcome guest in his own home, and eventually rented a room in the home of his former fiancé.

With Roe, however, Stopes managed to have the child that eluded her in her first marriage. The first Stopes-Roe baby was stillborn. The second baby was quite simply the most precious, most beautiful, most intelligent baby in history. Difficulties in the delivery of baby Harry, however, left Stopes unlikely to bear more children, so she set about adopting a suitable brother for her son. The first boy was found unsuitable and quickly sent back where he came from. So was second. So was the third. And so on. Eventually the first little boy got to come back, and proved resilient enough to survive the Stope-Roe household until he was old enough to join the Merchant Marine. As for precious Harry, once he reached his teens, he began to view his mother's treatment of his revolving-door brothers with distaste. It weakened the hold Marie would otherwise have had on him in later years, especially when he picked out his own wife.

Mothers-in-law have frequent disputes with daughters-in-law, but Marie Stopes, being an uncommon woman, picked an uncommon bone: eugenics. In fact, a nasty falling out with her daughter-in-law's father was likely the real reason for dislike, but Stopes fixated on her daughter-in-law's nearsightedness. Myopic Mary with her defective eyes and her need for "hideous" glasses "morally should never bear children," Stopes insisted. She called her son's decision to marry Mary a crime against his country, his family, and his children. Harry didn't care what his mother wanted, and married who he wanted to marry. Mamma refused to attend the wedding and sent no gift. She did, however, later send her son 100 pounds with instructions to spend all the money on himself, which he did not.

Stopes's dislike of her daughter-in-law wasn't her only flirtation with eugenics. In Britain, she especially hoped that "inferior" women would practice birth control. Worried about "hordes of Indians and Chinese," she campaigned for birth control in India even more enthusiastically than in England. She advocated sterilization for the "hopelessly rotten and racially diseased" and, despite her own earlier romantic interests, wrote about the perils of interracial marriage.

When a deaf man, who had met and married his deaf wife at a school for the deaf, wrote Stopes asking for assistance in securing one of his children admission to the Royal School for Deaf and Dumb Children at Margate, she not only refused his request but wrote a reproachful letter to the chaplain for the Royal Association for the Deaf and Dumb, demanding to know whether "defectives" ought to be allowed to reproduce. The chaplain replied:

The purport of your letter appears to be censure on me for strongly recommending the admission of a Deaf child to a residential school for the Deaf. Ought I, then, to have recommended the lethal chamber?

Stopes's eugenic enthusiasms leave her a mostly unpalatable legacy today. In 1921, she opened the first clinic in Britain to offer family-planning advice to married women. A century later, leaders of the Marie Stopes International charity found it prudent to rename the charity MSI Reproductive Choices.

Although contraception and the less palatable cause of eugenics dominated her life, Stopes had another ambition, which she focused on in her later years. Early on, Marie Stopes planned for her life to occur in three phases: science, social work and poetry. She succeeded on the first two counts. On the third, not so much. In 1945, she wrote:

The only consolation is that I know I am a great poet and that people will be allowed to know that after I am dead.

Stopes died of breast cancer in 1958, just days shy of her 78th birthday.