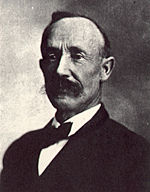 From The Life of a Fossil Hunter by Charles Sternberg

The son of a minister, Charles Sternberg looked for God's handiwork in nature, and finished his long career satisfied that he had found what he was looking for. Sternberg was born in 1850, and when his family moved from upstate New York to the Kansas frontier in the 1860s, he found himself surrounded by the Cretaceous Dakota sandstone, rich with fossils. Sternberg not only did well in rich fossil country, he also had a knack for finding fossils in areas that had already been combed by earlier fossil hunters, finding treasures others had missed.

Young Sternberg hoped to prospect for O.C. Marsh during the 1876 field season, but when that didn't work out, he turned to E.D. Cope. Cope funded Sternberg's first professional expedition, beginning a long and fruitful collaboration. In subsequent years, Sternberg would marvel at Cope's energetic and sometimes reckless behavior and eventually describe their adventures in The Life of a Fossil Hunter. While working for Cope, Sternberg engaged in the occasional reckless move himself, once climbing a hoodoo (a column of weathered rock) to retrieve the saber-toothed cat skull that topped it. Moments after he retrieved the skull, the rock spire collapsed.

Eventually Sternberg struck out on his own, developing a reputation as a leading freelance fossil collector. Science historian Lukas Rieppel remarks that Sternberg managed to acquire respect from professional paleontologists that often eluded freelance collectors because Sternberg was "willing to play the part of a self-effacing servant to truth." He collected specimens for the American Museum of Natural History (AMNH) and the British Museum, among others.

Sternberg found all kinds of fossils from the Paleozoic through the Cenozoic, but he is probably best known for the dinosaur fossils he discovered. His three sons, George, Charlie and Levi, all became talented fossil collectors in their own right. As a young man, George secured a position at AMNH and prospected for fossils under the direction of Barnum Brown. Brown had been enormously successful in finding Canadian fossils — so successful than the Canadians decided to hire their own crack team of fossil finders, namely Sternberg and sons. So while his son George worked for AMNH, Sternberg and his other sons prospected the same Canadian hills for the Geological Survey of Canada. At first, the competition was friendly, but tensions eventually ensued. George wound up leaving AMNH to take a position with the Canadian Geological Survey — and his father's crew.

The crowning achievement of Sternberg's career came in 1908, when his son George found a duckbill dinosaur mummy, with much of the skin intact. Originally reserved for the British museum, the fossil ended up at AMNH. The Sternbergs again found duckbill dinosaurs with skin impressions some years later, but the fossils were lost in transit to England when a World War I German warship fired on the vessel carrying them.

In his golden years, Charles Sternberg had the unusual privilege of seeing some of his favorite finds not in his garage or a prized cigar box, but on display at AMNH. He died in 1943.