Niels Stensen (also known as Nicolaus or Nicolas Steno) was born in 1638, in staunchly Lutheran Copenhagen. Stensen's father was a goldsmith and court jeweler, a situation that might foretell financial security, but he died when Niels was very small, leaving the family's finances unstable. Niels Stensen's own health was fragile in his early years, placing him in the continual care of adults, and leaving him with little interest in friends his own age. When he was a teenager, he lost many of the friends he did have to the plague (they chose unwise employment carting away corpses). The boy had an exceptional mind, though, and after hanging out in alchemy workshops and getting a basic education in language and math, he eventually attended college. Though his interests ranged from chemistry to sketching snowflake crystals, he studied to become a physician.

Steno's skill as a physician and anatomist became apparent while he was still a young man. He read the works of Paracelsus, Descartes, Galileo, Kepler and Kircher, and later met in person Jan Swammerdam and Frederik Ruysch. Steno himself impressed high society with his dissections of horse eyes. On a whim, he dissected a sheep's head and, almost by accident, discovered the duct of the parotid gland, which supplies saliva to the mouth. In later years, he uncovered the nature of muscle contractions, and the muscular nature of the human heart (thought by some to generate heat, not pump blood). Like his studies of the heart, Steno's careful dissections of human brains disproved some of the speculations of no one less than Descartes.

Steno went further than refuting the ideas of Descartes; he even rejected the Aristotelian elements of Earth, water, air and fire. This ancient view assigned distinct shapes to the different elements: icosahedron for water, tetrahedron for fire, cube for Earth, and octahedron for air. By examining grains of sand under a microscope, Steno discovered that they had a variety of shapes: "pyramidal, pentahedral, cubic, heptahedra, trapezia . . ." Steno recorded his observations in a manuscript he wrote in 1659, while still studying at the University of Copenhagen, Chaos. In this early work, he touched upon the modern understanding of the fractionation of the planet — the separation of Earth's matter thanks to the planet's heat. 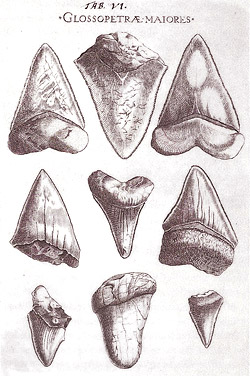 The savant's remarkable achievements only continued. In 1665, he settled in Florence, under the patronage of the Grand Duke of Tuscany, Ferdinando II, not too far from the University of Bologna. Both the time and place proved useful to understanding rocks and fossils. Unlike areas farther north, Italy at this time offered plentiful outcrops of bare, deforested rock, enabling relatively easy study of geology. Likewise, the fossils of the region were often geologically young, well preserved, and easily compared to living analogues. In this geologically rich region, Steno got to work with other bright members of the Accademia del Cimento, disciples of Galileo Galilei. Part of Steno's job was to assemble a curiosity cabinet, described by one modern writer as "somewhere between a carnival freak show and the basement of a university science department." By 1666, he had the opportunity to examine the head of a white shark, caught by local fishermen. When he wrote his description, Steno noted that the animal's teeth bore a remarkable similarity to glossopetrae, or tongue stones. He suggested that tongue stones weren't what they had long been supposed (serpent tongues turned to stone by St. Paul) but were instead teeth that had once belonged to sharks — animals that apparently sprout new teeth all their lives. Steno wasn't the first to arrive at this conclusion, but he apparently proved more successful than his shark-detecting predecessors at convincing others. He also suspected a natural process had turned the teeth to stone, although he didn't know precisely what it was.

Making his case for fossil shark teeth wasn't a simple matter of showing their modern counterparts. In Steno's time, many scholars and philosophers believed that fossils resulted from some creative force in nature. In those days, fossils were defined simply as natural (and sometimes manmade) objects dug out of the ground, so this explanation was partly true; Steno himself recognized that crystals could grow inside rocks. If this explanation were true in every case, however, then the shark teeth should be new, having recently been made by the surrounding rocks. In fact, he showed the teeth were old — as evidenced by their decayed state — and therefore relics from an earlier time. He also pointed out that, unlike tree roots that grow into rock crevices, the teeth weren't deformed, nor did they cause cracks in the surrounding sediment. Steno applied the same logic to other fossils, including numerous molluscan fossils found on mountaintops. He noticed that the shells had growth lines documenting their development from much smaller animals, but they also had borings from other animals. He wrote:

Whether they are dug out of harder or softer soil, bodies resembling different parts of aquatic animals are not only very like each other but are also very like the animal parts to which they correspond; there is no difference of any kind in the course of the ridges, in the texture of the lamellae, in the curvature and windings of the cavities, and in the joints and hinges of bivalves.

Steno's work influenced the views of Athanasius Kircher, a proponent of fossils as tricks of nature, who acknowledged that some fossils were the remains of once-living organisms. Steno's work also had an enormous influence on the polymath and Newton-rival Leibniz, who reproduced Steno's engravings in his own book.

A few years after identifying shark teeth, Steno accomplished an even more outstanding feat: perhaps the world's first stratigraphic section, a diagrammatic section of the geology around Tuscany. Steno relied on crustal collapse to explain the geology. He argued that when the world was first formed, water covered the planet's surface. When the water receded, cavities formed underground, and the ground overhead eventually collapsed, a bit like a pothole forms after heavy precipitation. These crustal collapses formed mountains and valleys. Noah's flood repeated the process. The crustal collapse hypothesis has since been disproven but Steno established three principles still accepted today. The first was the principle of superposition, the crucial discovery that old rock layers underlie new rock layers. The second was the principle of original horizontality, that sediments are deposited as liquids, and like water, they are deposited horizontally, filling in irregularities at the bottom, but making a smooth surface at the top. The third was the principle of lateral continuity, that layers of sediment are continuous, unless a barrier prevents the sediments from spreading during deposition, or subsequent changes in the landscape break those sediment layers apart. Steno also discovered that the oldest rocks in the bottommost layers didn't have fossils, while the rocks at the top did, and concluded that the rocks at the bottom predated life on Earth.

Steno's breakthroughs in the stratigraphic section marked what was possibly the first instance of fieldwork-based geological history of a particular region. Perhaps even more important, Steno showed that a rock-layer sequence documents a time sequence. In 1669, he published his findings in De solido, a 78-page book. While it contained its share of 17th-century mistakes ("In regard to the time of the universal deluge, secular history is not at variance with sacred history, which relates all things in detail"), the short book completely changed, if not invented, the field of geology.

Steno's principle of original horizontality meant that, when rock layers were found in something other than horizontal layers, they must have been disturbed after they hardened. "Strata either perpendicular to the horizon or inclined toward it, were at one time parallel to the horizon." In the decades after his death, other savants tried to explain the disruptions, sometimes interweaving biblical stories with worldwide catastrophes.

Steno devoted considerable space in De solido to mollusks, starting with a detailed analysis of shells one could pick up from a Mediterranean beach and moving on to fossil shells, including those that appeared to be filled with marble or crystal. He bolstered his argument that they were once-living objects with the example of "pearl-bearing mussel, found in Tuscany, in which the pearl was clinging to the shell itself." He advanced basically the same it-was-once-alive argument for fossil plants.

From The Meaning of Fossils by Martin Rudwick

De solido (alternately known as Forerunner or Podromus) was supposed to be an introduction to a much more in-depth work, but the bigger book never appeared. Steno's father had hailed from a preaching family, and Steno eventually followed in his footsteps, just for a different team. Born and raised in a Lutheran stronghold, he converted to Catholicism in 1667. Gian Battista Vai argues that, besides spiritual motivations for the change, Steno was likely influenced by his friends in the Accademia del Cimento, who viewed the Bible as a useful reference for morality but not astronomy or geology, and who believed good religion and good science were thoroughly compatible. The conversion didn't stop his geologizing, at least not immediately, but he eventually took his conversion a step further. He became a priest. After his ordination in 1675, he expected to remain a priest for the rest of his life, but Rome had other plans. Just two years later, he was made a bishop and sent to Germany. Born during the Thirty Years War, he spent some of the last years of his life ministering to the Catholics who had survived the protracted conflict. But ecclesiastical politics didn't appeal to Steno, and he soon reverted to the simple lifestyle of a priest with a special emphasis on self-denial and physical punishment. An alarmed friend described Steno's state as "without a house, without a servant, devoid of all life's comforts, lean, pale and emaciated." He wasted away to almost nothing and died, possibly from a kidney stone, at the age of 48. Centuries after his death, Danish pilgrims appealed to Pope Pius XI to make Steno a saint, and the savant was beatified in 1988.

For a time, Steno was perhaps better remembered as a cleric than a geologist, but the 19th-century naturalist Alexander von Humboldt drew attention to Steno's role as the "father of geology." Some might see Steno's embrace of religion as an implicit rejection of his geological studies, but he didn't feel that way at all. In fact, he once wrote:

One sins against the majesty of God by being unwilling to look into nature's own works and contenting oneself with reading others; in this way one forms and creates for oneself various fanciful notions and thus not only does one not enjoy the pleasure of looking into God's wonders but also wastes time that should be spent on necessities and to the benefit of one's neighbor and states many things which are unworthy of God.

As if beatification were not enough, in January 2012, Steno became the posthumous recipient of his very own Google Doodle. Showing a sedimentary landscape underlain by rock layers rich with fossils, the doodle recognized his role as a founding father of geology.