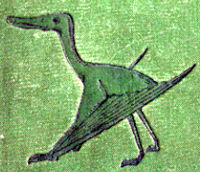 From Dragons of the Air by H.G. Seeley

In the early 1840s, Richard Owen established the Order of Dinosauria. Over the years, T.H. Huxley, E.D. Cope and O.C. Marsh attempted to further classify dinosaurs. But the lasting classification, not to mention challenge to Owen's order, came from H.G. Seeley.

A man of humble origins, Harry Govier Seeley attended Cambridge University, but quit before earning a degree. He began working as an assistant to Adam Sedgwick at the Woodwardian Museum in 1859 and was later offered positions with both the British Museum and the Geological Survey of Britain. Rather than accept either, he worked on his own, and only accepted a position with King's College much later in life.

From "Dividing the Dinosaurs" by Kevin Padian in Nature

While Seeley's new classification certainly didn't keep the public from thinking of dinosaurs as a group, it was enormously influential among paleontologists. It was also problematic. Seeley not only argued for separate groups among dinosaurs, he even argued for separate origins, writing "I see no ground for associating these two orders in one group, unless that group includes Birds, Crocodiles, Anomodonts, and Ornithosaurs; for differences of pelvic structure have been as persistently inherited as any condition of the vertebrate skeleton." Even though O.C. Marsh had identified many characteristics common to all dinosaurs, Seeley's interpretation held sway into the late 20th century. In the 1980s, paleontologist Jacques Gauthier unified dinosaurs in a single group.

Without access to dinosaur DNA, paleontologists rely on cladistics — assessing characteristics fossils have in common — to work out evolutionary relationships. In 2017, a fresh study by Matthew Baron, David Norman, and Paul Barrett rearranged the dinosaur family tree. They examined 475 characteristics across 74 dinosaur species from the Middle Triassic to the Cretaceous. They concluded that "lizard-hipped" theropods and sauropds weren't as closely related as previously thought, and theropods were more closely related to "bird-hipped" dinosaurs. Though not all paleontologists agreed with the study's findings, some observers said it was time to rewrite the textbooks.

Seeley was also an authority of pterosaurs, and in 1901 published a popular book on the subject, Dragons of the Air. In it, he gave an overview of animal flight, reptiles, the discovery of pterosaurs and pterosaur skeletal structure. He initially believed that birds descended from pterosaurs, but under intense criticism from his peers, backed off this assertion and argued that they shared common ancestry. "It would therefore appear from the vital community of structures with Birds, that Pterodactyles and Birds are two parallel groups, which may be regarded as ancient divergent forks of the same branch of animal life," he wrote. Like separate origins of "bird-hipped" and "lizard-hipped" dinosaurs, this interpretation has been overthrown — birds are now understood to be the descendants of dinosaurs, an idea that Seeley had long discouraged. But once again, he had challenged Richard Owen, and Seeley had been right. Owen had considered pterosaurs as cold-blooded, poor flyers. Seeley opposed him on both counts.