From A Cabinet of Natural Curiosities by Albertus Seba 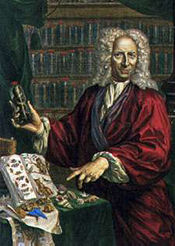 From "A Diverse and Marvelous Collection" by Müsch, Willmann and Rust

Born in 1665, Albertus Seba decided, while still a young man, to apprentice as a pharmacist. His decision proved fortunate, both for him and for science. In familiarizing himself with medicinal plants, he took an interest in other natural phenomena, including mammals, birds, mollusks, insects and — his apparent favorite — snakes. His success as an apothecary afforded him the opportunity to pursue his real passion: collecting.

In the late 17th and early 18th centuries, the practice of pharmacy couldn't be learned through books, but only through apprenticeship, often in a variety of locations. After his training was complete, Seba settled in Amsterdam, a port city with a bustling international trade. Seba knew that some of the best exotic specimens were found by sailors, so he frequently scurried down to the docks, ready to bargain, when ships arrived.

Plenty of well-off businessmen had collections in Seba's day, but many curiosity cabinets were eclectic collections of shells, coins, artifacts, and so on. Seba's tastes were more specific, and his collection could be characterized as material related to biodiversity: mollusks, other sea life from the shallows, bugs, and spirit-preserved snakes. By 1717, Seba's collection was big and varied enough to attract the attention of Peter the Great, who bought Seba's specimens. Peter promptly took the goodies home and placed the specimens into his own Kunstkamera — a collection of arts and curiosities — that he made freely available to his subjects. Seba meanwhile started building an even bigger second collection, and this larger collection, along with a few specimens in the curiosity cabinets of others, formed the basis for his next big project: Thesaurus.

He engaged more than a dozen artists and engravers and the occasional assistant writer in a massive and expensive effort. The results were 446 sizeable plates, 175 of them double-page, spread out over four separate books. The engraving process Seba used produced mirror images of the illustrations, and for the most part, this wasn't a problem, except for the mollusks, whose shells ultimately coiled in the wrong direction. The initial publication was black and white, but this was troublesome for the animals and plants that couldn't easily be differentiated without color, so many of the books were actually hand-painted after publication. How accurate the hand-paintings were probably depended on the artists' ability to consult accurately colored books, and/or the original specimens because Seba's text didn't often elaborate on color. In fact, some modern researchers prefer working from Seba's black-and-white prints, convinced the un-tinted versions details such as texture better than colored prints. 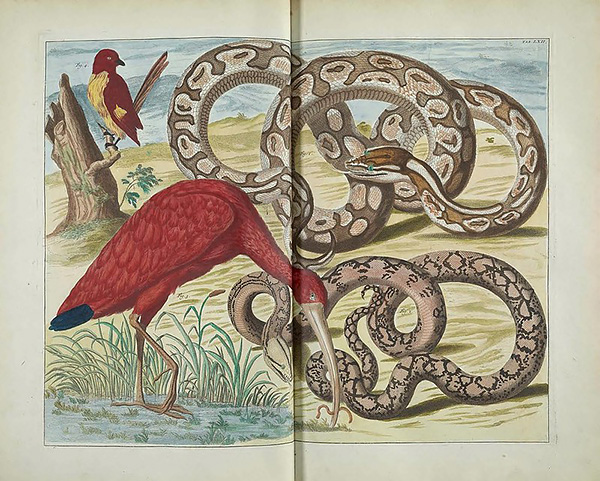 Seba's depiction of two snakes and a remarkably calm bird. From the Biodiversity Heritage Library.

Seba published the first volume of his Thesaurus in 1734, and the second in 1735. The next two volumes were planned for publication shortly afterwards, but Seba died in 1736, and clearing up his estate delayed publication of volumes three and four until 1758 and 1765. By the time the last two volumes were published, Seba's work had drawn some criticism, largely because it didn't reflect the new Linnaean system. Many critics overlooked the fact that the Linnaean system was only published in 1735, just a year before Seba's death. And even if the new Linnaean system didn't shape Seba's work, he apparently shaped Linnaeus, who visited Seba twice in 1735, and eventually cited the apothecary-collector's work about 284 times. In fact, some of the organisms depicted in Seba's books ultimately became type specimens in the Linnaean system, and because many of the original specimens were later lost, Seba's illustrations serve as the basis for identifying some type specimens that Linnaeus didn't describe very clearly in writing. One of the final specimens that Seba acquired, an elephant fetus preserved in alcohol, eventually served as the type specimen for the Asian elephant, but DNA analysis in the 21st century showed that the little elephant specimen was really of the African variety.

Seba's Thesaurus was a beautiful publication, in a large part because the boundary between art and science was still pretty fuzzy. Animals posed artfully, and shells were arranged in decorative patterns. Some of the work was fanciful or even folly, such as the many electric-blue snakes and the seven-headed hydra, yet much of it exhibited an almost unprecedented attention to detail and accuracy.