Beyond the Scythian Cannibals, in a certain large valley in the Himalayas, there is a region called Abarimon where some forest-dwellers live who have their feet turned back behind their legs; they run with extraordinary speed and wander far and wide with the wild animals. Baeton, Alexander the Great's road-surveyor, states that these people could not breathe in another climate, and for that reason none had been brought to the neighboring kings, or to Alexander himself. 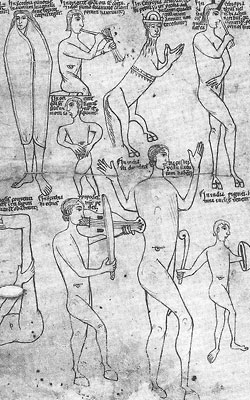 From The Beginnings of Western Science by David C. Lindberg

So wrote Pliny the Elder — next to Aristotle probably the single most influential scholar in Antiquity. More than a millennium after his death, Pliny's work was at least as widely read as that of Renaissance greats Conrad Gesner and Ulisse Aldrovandi. By the middle of the 15th century, some two hundred manuscript versions of his Natural History were floating around the educated world.

Gaius Plinius Secundus was born in 23 or 24 AD in northern Italy during a time of political unease. Family obligations called for him to serve at least briefly in the military, and he took a fairly risky posting in Germany when he was about 23. In 59 AD, he returned to Rome, apparently intending to practice law, but something turned him away from his original career plan and he quickly turned to writing — about grammar. (Perhaps Pliny found practicing law in Rome even scarier than fighting the German barbarians.) He eventually found security under Emperor Vespasian, whose eldest son Titus was Pliny's patron. Besides a grammar book, Pliny wrote several books on Roman history, but by far his greatest achievement was Natural History. It was probably the first attempt in Western Civilization to compile an encyclopedia. In writing Natural History, Pliny or his assistants extracted roughly 20,000 facts from 2,000 volumes by 100 authors. The 37-volume history had a table of contents that, when translated into English, required more than 70 pages.

In Pliny's 37 volumes of Natural History, Volume 1 mostly summarized the remaining 36 books. Volume 2 covered cosmology and astronomy. Volumes 3 through 6 described geography. Volumes 7 through 11 covered zoology — everything from people to fish to bugs — relying strongly on the teachings of Aristotle. Volumes 12 through 19 covered botany, including much of the work of Theophrastus. Volumes 20 through 32 were devoted to drugs and medicine. Volumes 33 through 37 covered rocks, metals, and precious stones.

Compiling so much information didn't leave much time for fact checking, and Pliny verified little of what he wrote. Among the marvels he described were monstrous races in far-off places: evil-eyed Illyrians, one-legged Monocoli and animal-human hybrids. He wrote about people with backward-facing feet and 16 toes and people who communicated with barks. Monsters particularly congregated, he suspected, in places like India and Ethiopia. He also described a boy who rode to and from school on a dolphin's back, and the gigantic skeletal remains of the mythical hunter Orion. He described a battle between an elephant and a dragon, whose blood combined, to account for the origin of cinnabar. He wrote of elephants walking to a river for a purification ritual at the new moon then carrying their young in a procession afterwards. He wrote a touching account of an slow-witted pachyderm who was found practicing his assigned tasks at night so as not to get beaten for a clumsy performance the next day. And we owe our belief that an elephant "cannot abide a mouse" to Pliny. Speaking of mice, rubbing their poo on your bald head can restore your gleaming, curly locks, he said. Pliny described petrified shark teeth as glossopetrae (tongue stones), and wrote of the octopus, "No animal is more savage in causing the death of a man in the water." He recommended treating a scorpion's bite by consuming the animal's ashes in a glass of wine. He recommended brushing one's teeth with ground mummy. He wrote that bear cubs are born as shapeless lumps of white flesh that must be gradually licked into shape by their mothers. He wrote about "king bees." 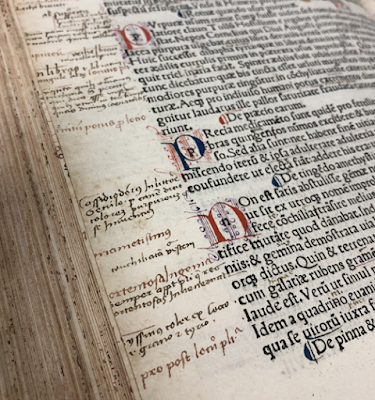 Not surprisingly, one modern science historian (Brian Cummings) has described Pliny as "endearingly batty." Long before the 21st century, scholars had doubts about the accuracy of his writings. A 1491 edition of his book, digitized by the Smithsonian, contains marginal notes on every single page, many of them corrections.

To be fair, however, Pliny qualified much of the information he passed along with phrases such as "some people say" or "so the story goes." And he did exercise some skepticism, explaining a "sea cloud" described by some sailors as a result of their fear of the dark, and commenting on the appalling gullibility of the Greeks.

Pliny's family was both wealthy and part of the governing class — perhaps old money. That might have been the motive behind his occasional tirades against vices typically associated with nouveau riche: gold rings, pearl jewelry, or clothes dyed with the aid of purple-fish. He even titled one chapter, "The decay of morality is caused by the produce of the sea." Snobbery might not have been Pliny's only motivation in such rants. Rome relied on — and Roman bling resulted from — slave labor, and thousands of unlucky slaves died in Roman mines.

From "An Illustrated Incunable of Pliny's Natural History in the Biblioteca Palatina, Parma" by Hermann Walter

Pliny's fantastic descriptions and anecdotes weren't accompanied by pictures. He opposed the use of illustrations, thinking they would be degraded by repeated copying. He was probably right, though even degraded images might have been more reliable than some of his text. Centuries after his death, later scholars added illustrations they felt best suited the text. The fish shown here was added to margin of a print of Pliny's work in the late 15th century. It might represent a rock goby, perhaps the same tiny fish Pliny credited with being able to hold a war ship still with the simple power of its suction.

If Pliny's accuracy was lacking, his productivity certainly wasn't. According to his nephew, Pliny the Elder rose around midnight to start working and hardly slept. He insisted on having a book read to him during his leisure time while he took notes, "being accustomed to say that no book was so bad as not to contain something useful." He even had himself carried from place to place rather than walk, so as to keep reading. That was one version of the legend. A slightly different account held that he went nowhere without two secretaries, one reading to Pliny and another taking dictation from him.

Unlike the work of other scholars from Antiquity, Pliny's work fared quite well during the Middle Ages. Natural History proved such an enormous influence on medieval thought that no full-scale critique of the work was produced until 1492. Savants and collectors throughout the Renaissance likewise saw him as a role model. One reason Pliny's work survived so well was that it was written in Latin — for centuries, the privileged few who could read anything could read Latin as easily as their own language.

Pliny the Elder was killed during the eruption of Vesuvius in 79 AD. In command of the Roman fleet at the time, he was headed for the volcano, hoping to get a closer look and, rather ironically, to reassure the locals. After receiving a letter from a friend's wife asking for rescue, he ordered a boat and took it into the danger zone over his helmsman's objections. He visited his friends, took a bath, ate a meal, took a nap, reassured the locals things would be fine, then suggested everybody head to the beach. Friends heard his labored breathing during his earlier nap. On the beach, as he reclined and drank water to cool off, his condition apparently worsened. Whether he suffocated from volcanic gases or died of a heart attack (he was neither young nor fit) is hard to say. He had invited his nephew along on the trip, but Pliny the Younger wisely refused. The young man's decision benefited his uncle's legacy as much as his own life.