In writing the biography of his uncle's triumphant but often troubled life, Phillips made one lament for himself: ". . . some allowance may be made for the feeling of the writer, who in this year, at too early an age, began to enter the shadow of those calamities in which his revered relative was plunged." The son of an excise officer, Phillips was born on Christmas day in 1800, and orphaned in 1807, losing both his parents in a six-month period. He and his younger siblings — his sister Anne and his brother Jenkin — went to live with their late mother's brothers. At first, Phillips lived with uncle John, and several years later, moved in with his uncle William.

By the end of 1815, Phillips was done with school and helping his uncle William produce publications supporting the sale of his uncle's fossil collection; the teenager was put to work on that project practically the day he arrived. Although Smith may have struggled to support his young charge, he inspired him, to the great benefit of Earth sciences. The two took many long geological field trips together, and while still quite young, Phillips developed an expert eye for rock layers and fossils.

Phillips's formal education ceased after the age of 15, but by the time he was in his 20s, he was the keeper of the Yorkshire museum, and secretary of the Yorkshire Philosophical Society. In 1832, Phillips became the first assistant secretary of the British Association for the Advancement of Science. Two years later, he accepted a professorship at King's College, London. In 1844, he accepted a post at Trinity College, Dublin. In 1845, he won (like his uncle) the Wollaston Medal, the highest honor bestowed by the Geological Society of London. In 1856, he succeeded William Buckland at Oxford, a post he kept until his death. Throughout all of this, Phillips was a prolific author. Early in his career, he wrote articles for Penny Cyclopedia describing geologic eras he would formally name soon afterwards. Besides a biography of his uncle, Phillips published Illustrations of the Geology of Yorkshire, Geology of Oxford and the valley of the Thames, Manual of Geology: Practical and Theoretical, and extensive monographs of marine fossils. Once the ultimate outsider, Phillips became the ultimate insider.

Phillips used his insider power to open up scientific meetings to women. His acknowledgement of female ability was likely influenced by his sister Anne. Neither John nor Anne ever married, and she served as his housekeeper for over 30 years, until she died in 1862. But the help she gave him was more than domestic; she contributed to his geological work, too, even finding a conglomerate supporting his hypothesis about the formation of the Malvern Hills. 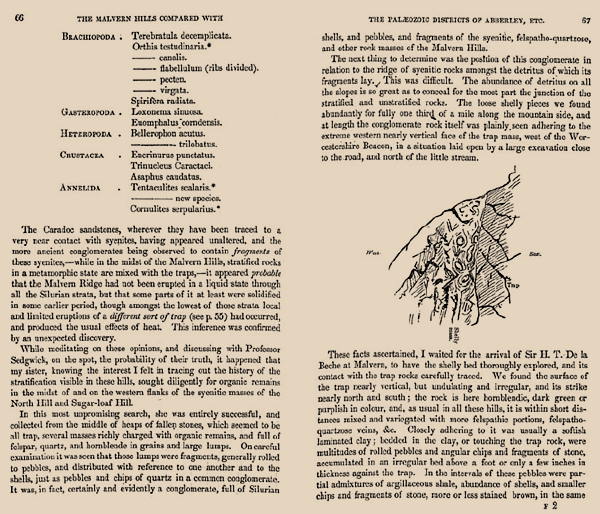 Understanding Phillips's contributions to paleontology requires knowing a little bit about the history of life on Earth. The Earth has a rich fossil record spanning the last 550 million years, or a little over the last 10 percent of the planet's history. That roughly 10 percent of time is known as the Phanerozoic Eon, and Phanerozoic refers to "visible life" — remains of living things being big enough to spot without a microscope. Geologists began identifying rock formations, which eventually became the basis for many geologic period names, long before anyone divided Earth history into the great eras recognized today. (Phillips's uncle William Smith was among the first to recognize the fossil turnover at the end of the Carboniferous, and the succeeding rocks containing the Permo-Triassic boundary that marked Earth's most massive extinction.) For his own part, Phillips was uneasy with these rock-system names as they were based on specific regions. He was more interested in a naming system that reflected changes in the history of life. In 1841, using Smith's principle of identifying rock formations with fossils, Phillips named three major geological eras (listed here with his original spellings): Palæozoic ("old life" or "The Age of Fishes"), Mesozoic ("middle life" or "The Age of Reptiles") and Cænozoic ("new life" or "The Age of Mammals"). Each age is marked by a substantial change in the types of fossils it holds.

Like his contemporaries, Phillips accepted a long pre-human history for the Earth. In Memoirs of William Smith, published in 1844, he wrote:

The most prevalent notion in the works which Mr. Smith could then [in the late 1790s] consult, regarding the forms and localities of organic remains, was the vague and irrational belief (founded on a misconception of the meaning of Scripture, but handed down even to these days as if to demonstrate the indestructibility of a popular error), that these relics of more ancient systems of life were all buried in the solid strata of the Earth by the operation of the general deluge. This notion appears never to have influenced for a moment the mind of Mr. Smith, who in . . . this period, not only denies the unsatisfactory hypothesis, but places in direct contrast with it his own views . . .

But while Phillips was no biblical literalist, he was no evolutionist either.

In 1860, the year after the publication of On the Origin of Species, Phillips delivered a lecture at Cambridge, his presidential address for the Geological Society of London. In it, he attacked Darwin's weak spot. Darwin had calculated (not very carefully, it turned out) that 300 million years had been required to carve the Weald, a wide valley in southeast England. Phillips pointed out Darwin's "abuse of arithmetic" then engaged in a detailed study of sediment deposition by the Ganges. Phillips focused not on how much time is required to erode a rock formation, but instead on how much time is required to build it. (His own study involved some assumptions, but his work was thorough enough to embarrass Darwin, who carefully avoided the topic afterwards.) Phillips estimated the age of the Earth at 1000 million years (1 billion years), about one-fifth of the current estimate of 4.6 billion years. Yet his estimate was closer to the mark than Darwin's.

Other research that Phillips presented in his lecture — reprinted in book form as Life on the Earth: Its Origin and Succession — had even more far-reaching ramifications than the age estimates.

When Charles Darwin uncovered the mechanism behind evolution, he did not use the fossil record to do so. In fact, Darwin and Charles Lyell both maintained that the fossil record was too poor to provide much evidence for the patterns of extinction and emergence of new species; Darwin likened the Earth's rock strata to a book with many pages ripped out. Among the first to employ statistical methods in studying fossils and naming geologic periods, Phillips demonstrated that the fossil record, though not complete, was actually quite rich. And he presented an astounding discovery, shown in the graph above. Concentrating on marine fossils, which consistently span the fossil record, Phillips showed that each successive era had a greater diversity of life forms than the last. His graph also underscored a sobering fact: At two separate times in Earth's history (the ends of the Palæozoic and Mesozoic), life on Earth was nearly extinguished.

Regarding evolution, Phillips was willing to acknowledge ". . . the unquestionable power of adaptation which living creatures possess, through exercise of the organs of life, by which some change is possible in structure and some change in function also, the new qualities being in some degree transmitted to the descendants." He even acknowledged the possibility of a "former race of men." Yet he maintained that basic body plans had persisted throughout the fossil record, though certain species became more common and others became less common. In the color-coded diagram, printed at the front of Life on Earth, Phillips showed the proportions of different classes over time.

Although he marshaled extensive research in his opposition to Darwin, Phillips's standpoint wasn't wholly scientific, it was partly spiritual. Some of this may have stemmed from his childhood. After losing both his parents, Phillips enjoyed financial support from his uncle William Smith, as well as from the Reverend Benjamin Richardson, who was also a fossil enthusiast. In fact, Phillips early education in geology came from Richardson more than his uncle. Having been saved from an orphanage or homelessness, and tutored by a religious man may have instilled in Phillips a greater respect for religion than he otherwise would have had. Phillips insisted that God had to be part of the explanation of life on Earth, and Darwin had conceived of a mechanism that — while it didn't preclude divine supervision — didn't rely on it either. Phillips responded, "An undevout philosopher is mad." Part of what Phillips argued against was Lamarckism, a seeming inevitability of evolution from simple to complex. (Darwin didn't argue that evolution was progress, he argued that it was adaptation.) But Phillips had a point about persistent classes. Science now acknowledges that most of the animal kingdom's basic body plans evolved at the beginning of the Palæozoic.

Science has proven Phillips wrong about evolution, but what about his claims of increasing diversity? It could be his conclusion was an artifact of the fossil record. Newer rock is better preserved, making its fossils easier to find, and fossils are easier to collect from young, uncompacted sediments than old, compressed rock. Both factors would skew paleontologists' interpretation of the rock record toward increasing diversity in recent geologic times. Another complicating factor is the development of ecological niches. To what extent do such niches exist independently of species using them, and to what extent does life on our planet create whole new niches? Cnidarians build coral reefs that provide homes for hordes of other animals.

In the century and a half since Phillips published his diversity of life diagram, paleontologists still struggle to figure out just how accurate he was. In 1972, University of Chicago paleontologist David Raup argued that the diversity of marine life might have plateaued more than 400 million years ago. Meanwhile, John "Jack" Sepkoski, also at the University of Chicago, also took up the question. He analyzed newer data, also focusing on marine fossils. Sepkoski did find some biases in the collection of data, but not enough to overturn Phillips's conclusion: The number of species on Earth has continued to increase through time. A 2001 study reached a very different conclusion, indicating that marine fossils had not diversified much in the past 400 million years — similar to Raup's 1972 hypothesis. That was followed by a 2008 study that took a fresh look at a worldwide database of the fossil record and concluded that life on Earth certainly had continued to diversify, although not as much as initial estimates. Scientists continue to debate how accurately fossils record life's diversity, but so far, the conclusions Phillips reached appear to have largely withstood the test of time.