To say that Ambroise Paré lived in times unlike our own is a bit of an understatement. Born in France around 1510, he served as a surgeon's apprentice as a youth, probably rising around 4 a.m. every day to shave customers (surgeons and barbers worked together in those days), attend university lectures in Latin (a language he didn't understand) and squeeze his studies in between any task his master gave him. Despite the challenges, he rose to the rank of barber surgeon, then full-fledged surgeon, and eventually a doctor for Charles IX, Henri III and Catherine de Medici. Yet the man considered the father of modern surgery did not enjoy the same esteem that surgeons do today. Because they were less educated and made a living using their hands, surgeons seemed somehow inferior to physicians, who practiced "pure" medicine. When he published, Paré was often criticized by physicians for daring to write about topics beyond his area of specialization. 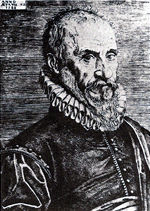 From On Monsters and Marvels by Ambroise Paré

Paré spent his life serving in the army in wartime, and caring for the sick and poor of Paris during peaceful periods. After he practiced surgery long enough to prove himself, he also proved to be a shrewd businessman, acquiring several houses and providing well for his family. He had three children by his first wife and, after she died, six by his second wife. Several of the children died young, however, and he didn't leave a single son who survived into adulthood to carry on his work. Though he was unquestionably a man of strong faith as evidenced in his writings, his exact faith — Catholic, Protestant, or convert — is unknown today. 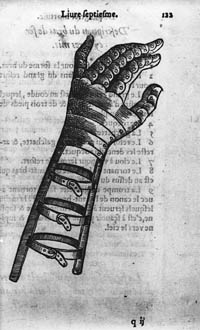 Paré's time was a curious mix of fascination with the natural world and often childlike faith in rumor. So while he made many astute observations about his patients and the world in which they lived, he also passed along sketchy medical advice, such as eating parts of Egyptian mummies to ward off bruising. He also shared unsubstantiated accounts of sea devils, marine sows, and "monstrous" animals with human faces in his book Des Monstres, first published in 1573. Paré did, however, attribute only some unusual babies to anything like divine intervention. Most he attributed to natural (if inaccurate) causes such as "narrow wombs." He also suggested that some "monsters" might be fakes, or might have been children deliberately disfigured by their parents to bring in greater handouts as beggars. With its extensive discussion of reproduction and illustrations of birth defects, the book invited accusations of pornography. (Most if not all the illustrations in Paré's work were borrowed from other sources, including the works of Conrad Gesner.)

Despite the misinformation he occasionally passed along, Paré earned a reputation as an independent thinker, briefly tutoring the polymath Paracelsus, and once stating he would rather be alone and correct than go along with the crowd in a mistaken belief. When Vesalius made strides in understanding human anatomy, Paré had parts of Vesalius's work translated into French, making it available to barber-surgeons who couldn't read Latin. He conducted experiments that disproved the alleged healing qualities of "unicorn horns" and elaborated his doubts about the unicorn myth in Des Monstres, recommended a soothing salve over boiling oil to treat gunshot wounds (though there's some debate about whether he really pioneered the gentler approach) and recommended ligature instead of cauterization in amputations. He may have been the first person who learned to tie an artery. He designed mechanical prosthetics, illustrated in his Dix Livres de la Chirurgie (Ten Books of Surgery) aimed at helping amputees return to a semblance of normalcy. And Paré knew how to respond to adversaries. When an anonymous critic tried to squash Paré's opinions, he wrote, "I say nothing of his apparent animosity, which I suppose must be due rather to his zeal for the truth than to any opinion that he can hold of me."