Sir Richard Owen's boyhood tutor once described him as "lazy and impudent" and predicted he would "come to a bad end." If the accusation of laziness was at any point a fair one, Owen obviously outgrew the defect, but the accusation of impudence was likely correct. According to some accounts, when his contemporaries described him as the English Cuvier, Owen was not exactly flattered; he considered himself superior to the French anatomist.

Owen combined exceptional brilliance with an exceptionally difficult temperament. On one occasion he suggested — partly because the institution was headed by an intellectual adversary — that the Royal Botanic Gardens at Kew undertake experiments in "turning urban sewage into fodder."

He studied at London's Royal College of Surgeons, and impressed his anatomy teacher enough to be offered a position at the Hunterian Museum. Once Owen began teaching at the Royal College of Surgeons in 1836, he delivered three lectures a week without ever repeating a single lecture in 20 years. He continued publishing until the age of 85, writing a mind-boggling total of more than 600 scientific papers. Owen's expertise in vertebrate paleontology knew no peers (except Cuvier himself). He was the person to see for interpretations of puzzling fossils. By examining a single femur fragment of a New Zealand moa, for instance, Owen deduced that it belonged to a giant flightless bird, and later discoveries proved him right. Within a few years, he received enough bone fragments to identify several species of extinct moa. (He was, however, stingy in acknowledging the individual who brought him the bone fragment, and who suggested its avian nature, while Owen himself was initially skeptical.)

His insistence on physical evidence emboldened Owen to reject commonly accepted evidence of cryptozoological creatures (such evidence being the testimony of reputable people), and his exceptional ability at examining physical remains enabled him to expose the occasional fraud, such as Albert Koch's "sea monster" really pieced together from fossil whales. Yet he had his own blunders. In 1868, evolutionist Thomas Henry Huxley pointed out a series of embarrassing errors Owen had made in his description of Archaeopteryx, and used Owen's mistakes to overthrow his interpretation that the fossil belong to a bird, not a transitional form between birds and reptiles.

Owen's best-known contribution to science, however, was likely his combination of two Greek words: deinos ("terrible") and sauros ("lizard") in the early 1840s. He made the decision after realizing that the three extinct-reptilian species so far discovered — Megalosaurus, Iguanodon and Hylaeosaurus — had fused vertebrae in their hips. Politically, it was a brilliant move. For the previous two decades, the name associated with the great reptiles had been Gideon Mantell's. Now the name was Owen's, even though he had not really discovered anything new. 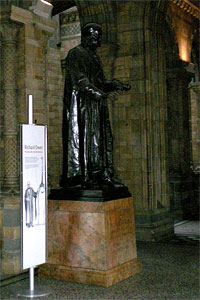 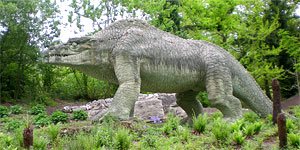 Mantell, the original discoverer of the Iguanodon and Hylaeosaurus dinosaurs, was a long-suffering target of Owen's. Though his own work with Iguanodon was based on Mantell's, Owen refused to acknowledge as much, instead implying in his publications on the fossil that Mantell was incompetent. Owen did the same thing with another fossil find. In the early 19th century Mantell purchased some delicate fossil bones from quarry workers and described the bones as avian. Owen initially supported the interpretation, then later identified them — accurately but very publicly — as pterodactylian, without any advance warning to Mantell. After Mantell's death — when a portion of Mantell's badly injured spine was in Owen's museum to exhibit "the severest degree of deformity" — local geologists universally attributed an anonymous obituary deriding Mantell to Owen.

Owen cared no more for evolutionists than he did for Mantell. Impressed by how well-designed organisms were for their environments, Owen believed that they changed over time, but did not believe in the evolutionary theories of his day — Lamarck's transmutation or Darwin's natural selection. Ironically, Owen and Charles Darwin were friends while young, and in studying his South American fossil finds with Owen at the Hunterian Museum, Darwin accumulated evidence for his theory of natural selection. Likewise, Owen developed a hypotheses of archetypes, or homologies, in which animals were all variations on an Ideal Type. (In finding these similarities, he unwittingly found evidence for evolution, which he did not accept. In fact, Owen's homology has been compared to the "analogue" proposed by the early-19th-century evolutionist Geoffroy Saint-Hilaire.)

Darwin exacted sweet revenge for this. In later editions of Origin of Species, he included a historical sketch in which he acknowledged scientists who had in some way preceded him in understanding natural selection. He included Owen. In fact, Darwin went on and on about Owen and natural selection, devoting more than a page of text to his frenemy.

Insisting evolution couldn't be true, Owen maintained to the end of his days that the dominant life forms in Earth's history had arisen through special creation, without ancestors. When overseeing depictions of dominant life forms of the Mesozoic, he used distinctly mammalian articulations, to demonstrate their closer affinity with the dominant life forms of the Age of Mammals rather than the lowly reptiles of today. Evidence of Owen's beliefs about the Mesozoic can still be seen in the dinosaur sculptures at Crystal Palace, a park in south London. They look like eerie crosses between crocodiles and rhinos. (The mammalian articulation was eventually overthrown by both Mantell and Louis Dollo, who found more extensive Iguanodon fossils.)

By general consent, Owen was no nice guy, although a so-called lost sketchbook of his reveals a side of his personality that was surprisingly funny. Needless to say, his humor was dark. One series of sketches showed "The Primitive Age," "The Invention of Weapons" and "Of Deadly Nature." And although plenty of fellow scientists had reason to dislike him, he championed Britain's science-inspired Pre-Raphaeliste Brotherhood, who turned away from Raphael imitation in favor of intensive studies of nature. 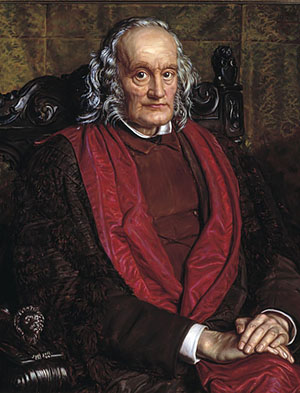 Owen portrait by Pre-Raphaelite painter William Holman Hunt. From "Rebels of Art and Science" by John Holmes in Nature.

A friend of the British royal family (when it was more powerful than it is today), Owen got to pass his final days in a lodge given to him by Queen Victoria, and party in the belly of a reconstructed Iguanodon. By lobbying the royal family, he played a crucial role in the establishment of the British Museum (Natural History) — now known as the Natural History Museum of London — in South Kensington.

Owen has left his mark throughout London's Natural History Museum, from the museum's overall design that evokes a cathedral to the terra cotta decorations depicting extinct animals to the plant illustrations on the ceiling panels. (Always more interested in animals than plants, Owen considered letting the herbarium sheets originally compiled by Hans Sloane go to the Royal Botanic Gardens, Kew. Once that became a distinct possibility, Owen suddenly found himself torn between a general lack of interest in plants and a desire to have control over everything. The desire for control won; the herbarium sheets are still at the museum.) Today the museum acknowledges Owen's sustained efforts to establish a "cathedral to nature" through numerous mentions in guide books and through a statue. But Owen's statue — looking almost clerical in long academic robes — has been relegated to a dark corridor at the back. The landing of the museum's central staircase now holds a statue of Charles Darwin.

Owen outlived most of his colleagues, including his nemesis Darwin. But longevity has its drawbacks; Owen also outlived his wife by almost 20 years and his only son, who committed suicide. And his final years saw growing acceptance of Darwin's theory. Sir William Flower, who succeeded Owen as director of the Natural History Museum, was an ardent evolutionist; Charles Darwin was commemorated with a statue in the museum 11 years before Owen received a similar honor. After his death, an Oxford professor described Owen in terms even less flattering than his boyhood tutor, namely as "a damned liar. He lied for God and for malice."