Born in 1588, Ole Worm — also known as Ole Wurm or Olaus Wormius — was a Danish savant who became a professor of Latin, Greek, medicine and physics. He was born in the Danish city of Aarhus, where his father was mayor. Growing up, he enjoyed an exceptional education, first attending grammar school in Aarhus, and later traveling to Germany, Italy, France, England, Belgium, Luxembourg and the Netherlands. He studied under the famous taxonomist Caspar Bauhin, visited the famous cabinet of Ferrante Imperato, and modeled himself after the famous Aldrovandi. In 1611, Worm earned his doctorate in medicine, after compiling a dissertation on just about every disease known at the time. 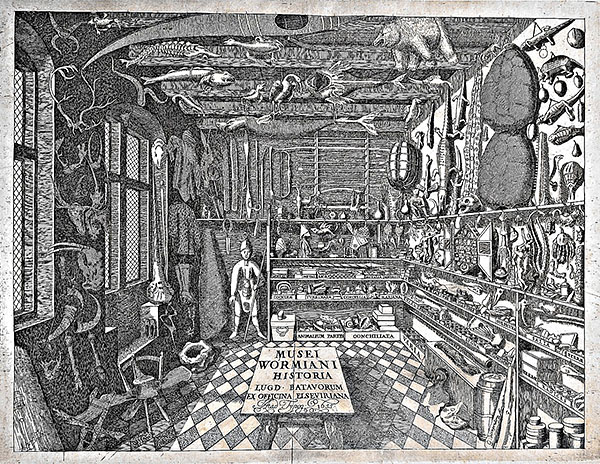 The published illustration of Worm's curiosity cabinet, from Wikipedia

While on his European grand tour, he started collecting unusual objects. Worm's interests covered natural objects, human artifacts, mythical creatures and ancient inscriptions. After his grand tour concluded, he began working at the University of Copenhagen, eventually becoming a professor of medicine in 1624. Meanwhile, he built one of the most well-known curiosity cabinets in Europe, and in 1655 posthumously published Museum Wormianum, or History of the Rarer Things both Natural and Artificial, Domestic and Exotic, which the author collected in his house in Copenhagen. As the title suggests, the catalog included natural objects (minerals, plants and animals), and human-made objects. Collection catalogs were a new kind of publication in the mid-17th century, and Museum Wormianum counted among the earliest examples.

From Ole Worm's Cabinet of Wonder: Natural Specimens and Wondrous Monsters at the Biodiversity Heritage Library

From A History of Geology and Medicine edited by Moody, Duffin and Gardner-Thorpe

Worm passed along remarkable stories if he believed they came from reliable sources, describing the wondrous attributes of bezoar stones grown inside animal bodies, for instance. Yet he also advocated investigations of unusual objects where possible. Not surprisingly, he considered the authority of ancient "experts" a hindrance to clear thinking. Worm was among the first to establish that the fabled unicorn horn and actual narwhal tusks were one and the same, as he explained in a paper he delivered in 1638. (His motivation might not have been entirely altruistic; his in-laws were in the business of prescribing the seemingly superior narwhal tusk to treat a host of maladies.) He also disproved the spontaneous generation of lemmings (thought to fall from the sky, perhaps), though he didn't doubt the spontaneous generation of some other organisms.

Beyond his contributions to natural history, Worm laid the foundations of modern archaeological surveys, recommending assiduous collection of information from every archaeological site. Some historians have argued that Worm's collection might have spurred the interest of the young Niels Stensen (Steno), who in turn laid the foundations for modern geology. Steno grew up just a few streets away from Worm's curiosity cabinet.

Unfortunately, Worm's collection did not outlast him very long. His small museum was shuttered after his death, the specimens sent to other collections. Some of the objects likely landed in the Royal Danish Kunstkammer, which Steno did visit, probably more than once. 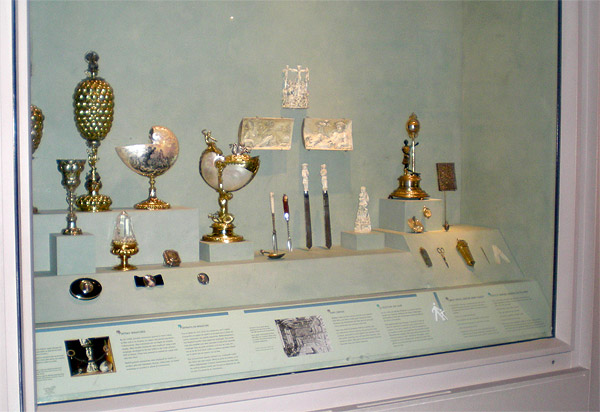 The iconic print of Ole Worm's museum appears in a curiosity cabinet display at the Royal Ontario Museum in Toronto. Photo by Michon Scott.

Although Worm's original museum is gone, a three-dimensional facsimile of it now exists, thanks to photographer Rosamond Purcell. After years of examining the engraving of his small museum, she opened a recreation of it in 2003 at the Santa Monica Museum of Art, in her exhibition Two Rooms. That show was temporary, but in 2011, the recreated museum took up permanent residence at the Natural History Museum of Denmark in Copenhagen. And isolated specimens from his curiosity cabinet survive in the Danish royal collection and museums of the University of Copenhagen. Some of the more interesting objects include tiny shoe carved from a cherry stone, a drinking horn, a marble globe, and a horse mandible entwined in a tree root.