People have known for centuries that children resemble their parents. In the middle of the 19th century, however, an obscure monk discovered something remarkable: One could mathematically predict which traits parents would hand down to their offspring. This discovery revolutionized agriculture. It lent credence to some fairly sickening plans for weeding out "undesirables" in the human population. It also shed light on the process of evolution.

Born to a farming family on July 22, 1822, Gregor Mendel had no aptitude for agriculture, despite how much his research would affect the field later. He lived in Moravia (what is today the Czech Republic), in a society that preserved remnants of feudalism. Farmers were compelled to labor a few days every week for local landowners, getting only four days a week to farm their own land. As a youth, Mendel frequently took to his sickbed for weeks — even months — at a time, apparently not much looking forward to his future. His luck changed when a teacher recognized his sharp mind. Mendel eventually enrolled at Olomuc University, but finances interrupted his studies. Though he probably never felt a strong spiritual calling, he joined the Augustinian order, thereby escaping his financial worries. The monastery provided an environment that encouraged learning and experimentation, and here Mendel stayed for the rest of his life.

He fulfilled various duties as an Augustinian, including visiting the sick. When his superiors saw how much those visits troubled him, he was relieved of that responsibility. He taught science for years, but because he never passed the requisite exams for a teacher's certificate, he always had to work as a substitute. He proved best suited to science. 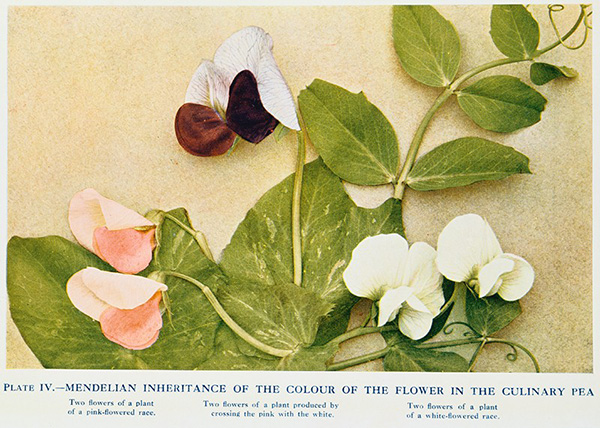 From "The True Legacy of Gregor Mendel: Careful, Rigorous and Humble Science" in Nature, from the Oxford Science Archive

Before turning his attention to peas, where he would make his most important discoveries, Mendel bred mice, but the local bishop apparently preferred that Mendel find a more genteel area of study. Peas proved practical; they were cheap, took up little space and produced offspring quickly. So for years, Mendel carefully tended his pea plants, meticulously counting and classifying their offspring. No one knows exactly how many pea plants Mendel grew, but in the 1930s, one historian calculated that he may have grown more than 5,000 plants in 1859, and more than 6,000 in 1860. "We can also suspect that pea soup made a tiresomely frequent appearance on the menu of the monastery of St. Thomas," modern historian Peter Atkins has observed.

While Mendel worked, controversy raged around Darwin and Wallace's newly published theory of natural selection, but Mendel didn't participate. Instead he hammered out the mathematical principles of inheritance. Darwin, like many of his contemporaries, believed that parents' traits were mixed to middle ground in their offspring. Mendel astutely studied simple either/or characteristics such as purple or white flowers, and discovered that they are passed to offspring intact, although at different rates (often a 3:1 ratio). He also made the clever deductions that some traits can reappear generations later, after seeming to disappear, and that different characteristics are inherited independently of each other. Contrary to popular opinion, Mendel didn't discover genes, much less "dominant" and "recessive" genes. Instead, he used these terms to describe the appearance of a character, or what we now consider gene expression. After years of working with peas, Mendel moved on to other crops to verify his findings. In 1866, he published his results: "Experiments on plant hybrids" in the transactions of the Natural History Society of Brünn.

Although Mendel ordered 40 reprints of his paper, the whereabouts of only a handful are now known. Darwin was reportedly on the recipient list and, so the story went, didn't even cut the pages (necessary in those days to open papers) to read Mendel's work — an assertion that has been disputed. Only one scientist ever bothered to respond to Mendel's paper, and he responded with what would ultimately prove to be unfortunate advice, at least when viewed through the prism of later discoveries. Karl (or Carl) von Nägeli, of the University of Munich, had previously experimented with hawkweed, a plant that follows an obscure asexual reproductive method. Mendel started experimenting with hawkweed, and began to question his findings from studying peas. Moreover, when other naturalists tried to replicate Mendel's findings, they had little success, a problem that might be explained by the fact that traits of living organisms are not always determined by just one gene pair. While some of the characteristics Mendel studied, e.g., pea seed shape, are decided by a single gene pair, many traits in many organisms are determined by multiple gene pairs working together, and many genes are inherited in groups. Modern biologists and science historians have also noted that Mendel bred his peas to spot clear traits. Science journalist Angela Saini writes:

When Mendel did his experiments, he deliberately bred his peas to be reliable in every generation. The aberrations, the random mutants, the messy spread of continuous variation you would normally see, were filtered out before he even began, so every generation bred as true as possible. Peas were either green or yellow. This allowed him to see a clear genetic signal through the noise, producing results that were far more perfect than nature would have provided.

Mendel finally gave up all experimentation when he became abbot of the monastery, though he continued to dabble in ornamental horticulture.

Mendel's main interest in studying genetics may have been simply to better understand hybridization (an interest Nägeli would have shared), rather than develop a general theory. He did hope for recognition, but the only recognition he enjoyed during his lifetime was as a local meteorologist. Although he was said to remark, not long before his death, "My time will come," it's hard to know whether he really believed his own words. He died in 1884 never knowing how much his findings would change history. Mendel's work was cited in a few papers in the late 19th century, but it wasn't until the dawning of the 20th, motivated in part by a priority dispute about publication, that other scientists took note of the 19th-century experimenter.

After Mendel died, his original manuscript, "Experiments on Plant Hybridization," alternated between celebrity and obscurity perhaps even more than his theory. Around 1911, a teacher fished the paper out of a wastebasket in the Brünn Natural History Society's library. After being returned to the society's files, the manuscript spent time in the briefcase of a German botany professor. The paper went missing altogether under Soviet occupation, then turned up decades later in the possession a later-generation Augustinian monk and descendant of one of Mendel's sisters. Other Mendel family descendants were overjoyed to take possession of the paper — until the same Augustinian monk allegedly learned that he'd be evicted from the cloister if he didn't hand the manuscript over to his fellow monks. A New York Times article in 2010 reported that the ministry of science in Baden-Württemberg was also involved in the dispute. Dynastic and monastic tensions notwithstanding, Mendel might have been mollified that his manuscript was finally prized.

As the 200th anniversary of Mendel's birth approached, a Nature editorial praised his paper ("a model for research communication") and his research ("careful, rigorous and humble"). At the same time, the editorial acknowledged the complexity of genetics, noting that any organism's traits are an interplay of genes, gene position within a genome and a cell nucleus, RNA, epigenetics, and environment. But the editorial also praised Mendel as "a giant in science."