Antoine-Laurent Lavoisier is best remembered as a genius in the field of chemistry. After conducting a series of elegant experiments, he named oxygen and overturned the phlogiston theory of Joseph Priestly. Lavoisier probably could have been a little more generous in acknowledging the groundwork laid by Priestly's efforts, but it was still a significant accomplishment. 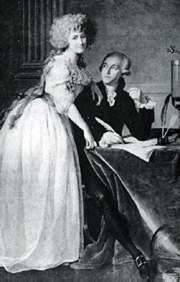 From The Lunar Men by Jenny Uglow

Born in 1743 to a wealthy upper-middle-class family, Lavoisier inherited a fortune at 11, and became a member of the Académie des Sciences at 23. Soon after, he shocked many of his friends and colleagues by joining a deeply despised profit-driven tax-collecting firm, the Farmers-General, and marrying the 13-year-old daughter one of the firm's senior members. The marriage's prospects might not have looked promising, but Lavoisier and his wife Anne-Marie proved to be a devoted, if not necessarily faithful, couple. She became his reliable lab assistant and even learned English to keep her husband abreast of scientific developments across the Channel.

Lavoisier was a polymath. He made advancements in mineralogy, ballooning, street lighting, and even established a model farm and an organization for famine relief — putting at least some of the money he made collecting taxes to good use. Though he wasn't really educated in natural history, Lavoisier also made exceptional contributions to geology.

In 1766, Lavoisier began working with the geologist Jean-Etienne Guettard to create geological maps of France. At the time, most geologists believed that Earth's ancient landmasses had been submerged under a giant ocean, and that this universal sea was responsible for the layers of sediments they found. Lavoisier's studies led him to reject this notion for a more complicated (and accurate) explanation.

From The Lying Stones of Marrakech by Stephen Jay Gould

In his mapping efforts, Lavoisier recognized two distinct kinds of sediment layers. One kind often contained thin, delicate, well-preserved shells that must have been deposited gently. The other contained no well-preserved shells, but lots of rounded pebbles. Lavoisier deduced that the pebbles had been smoothed by agitated water. He named the first kind of sediment pelagic beds, and the second kind of sediment littoral beds. Further, he hypothesized that the two kinds of beds resulted from alternately rising and falling sea level, and that the roughened-up littoral beds were nearer coastlines.

So many advances and retreats of the sea, and such a peaceful deposition of pelagic sediments suggested to Lavoisier "an immense span of years and centuries." He also recognized that some sediment layers preceded any discernible fossils, but more recent sediments contained them. He ultimately concluded that the Earth was originally devoid of life, then developed land-based vegetation, then developed animals on land and in the sea.

Lavoisier published his insights in 1789, including the explanatory diagram shown above. Just five years later, he was dead, having been sent to the guillotine in the Terror of the French Revolution.

Clearly his countrymen hated Lavoisier's involvement with tax collecting more than they admired his science. They had legitimate grievances. In pre-revolutionary France, people born into great wealth paid relatively little in taxes while tax-farm investors profited from a tax-collection system so brutally regressive that Adam Smith — proponent of self-interest and competition — commented on its cruelty. Exorbitant taxes on everyday goods like food and fuel ensured that poor people got poorer. In an age before refrigeration, salt was essential to food preservation. Among the many schemes the poor undertook to get around paying high taxes was the use of tanning salts for preservation. So Lavoisier's fellow tax collectors poisoned the tanning salts. Lavoisier eventually proposed a wall around Paris through which all goods had to pass. The Farmers-General wall cost Lavoisier his head.

The unrest in France even ensnared his British rival Priestly, who threw a party to celebrate the fall of the Bastille only to have his own house ransacked by a royalist mob. Priestly, at least, retained his body parts. One of Lavoisier's surviving friends remarked, "It took them only an instant to cut off his head, but France may not produce another like it in a century."

Lavoisier's critics were less generous, one of them remarking that he and his ilk had likely cost France eight to 10 famines. When his friends tried to intervene on his behalf, arguing that his genius should exempt him from the death penalty, the presiding judge retorted, "The Republic has no need of geniuses."

Lavoisier's widow survived him, having evidently escaped the public's ire, or at least deadly consequences of it. Apparently attracted to the same combination of admirable and despicable traits, Widow Lavoisier took up with Benjamin Thompson, a royalist originally from the American colonies. Thompson was a sometime spy, a sometime social reformer, and a persistent user and taker. He and Lavoisier's widow had a happy, years-long affair followed by a shorter, tumultuous marriage.