In their fierce competition with each other, O.C. Marsh and E.D. Cope employed their own small armies of field workers. One member of Marsh's army was Arthur Lakes. Born in England in 1844, Lakes was educated at Queen Elizabeth College Guernsey. He later emigrated to the United States and began teaching. Working at a prep school in Golden, Colorado, Lakes found himself near excellent fossil beds, especially near Morrison. He began collecting fossils in his spare time.

In 1878, fire struck the prep school where he worked, and Lakes had to turn to fossil collecting to make a living. By then, he had already been in touch with Marsh, and began working for the professor, even traveling to Yale during the winter of 1878-1879. At Marsh's direction, Lakes also traveled to Como Bluff, Wyoming, to do extensive field work.

Besides a teacher and fossil collector, Lakes was a clergyman, geologist and artist. Part of his responsibilities in the field included documenting the work with sketches and watercolors. He also recorded some of his experiences in journals, which became a valuable record for later science historians.

I jumped onto the platform and walked into the station house room. There were half a dozen men smoking and playing cards around the stove. Amongst them was a tall swarthy complexioned man with a handsome face dressed in a full suit of buckskin ornamented with fringes after the frontier fashion. The broad brimmed white felt hat on his head had the front rim thrown up like a vizor and perforated by a gun-wad punch. He was standing with his back against the stove, the most striking and commanding figure of the group looking the idea of a frank, freehearted frontier hunter. 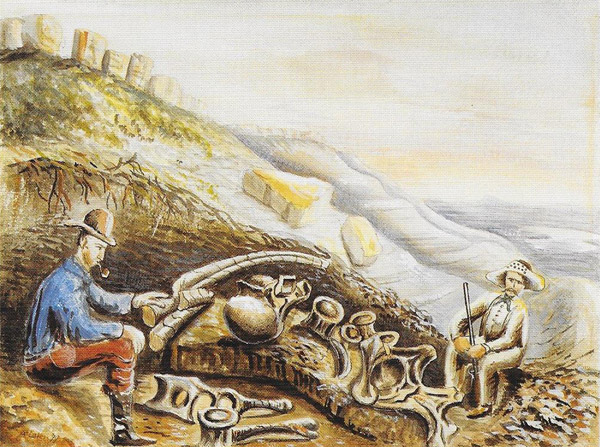 Lakes's depiction of fossil diggers Ed Kennedy and William Reed, who looks like he has shot his hat brim full of holes. From House of Lost Worlds by Richard Conniff.

The working relationship soon soured, perhaps because Reed wanted Lakes to spend less time documenting and more time digging. Perhaps Reed couldn't appreciate that the Lakes's sketches and notes provided scientifically valuable information. Perhaps Reed couldn't get along well with anybody for very long; he clashed with several other fellow fossil diggers, too. Both Reed and Lakes offered their resignations to Marsh, but instead continued working for the professor, albeit separately. Through it all, Lakes continued sketching and writing in his journal, describing the landscapes and fossils. Of one Wyoming quarry, he wrote:

Below this were the series of variegated clays and shales, purple, red, and greenish traversed here and there by thin beds of shaley sandstone weathering brown which continues to the yellow sandstone capping the marine or lower Jurassic containing the Ichthyosaurus bones.

At Morrison, Como Bluff and other localities in the late 1870s, Lakes helped unearth such Mesozoic gems as Stegosaurus, Apatosaurus and Allosaurus. He retrieved what might be the first-found fossil (a tooth) of Tyrannosaurus near Denver. Lakes sent the tooth to Marsh in 1874. Despite his employment by Marsh, Lakes actually enjoyed a cordial visit from E.D. Cope while he worked at Como Bluff. Though it was the last thing he intended, Lakes greatly exacerbated the animosity between Cope and Marsh. When he found some big dinosaur bones near Morrison, Colorado, he sent specimens to both Cope and Marsh. Cope sent Lakes $100 and asked him to keep quiet about his discovery and, above all, not to tell Marsh. A confused Lakes then asked Marsh to pass the bones along to his arch rival. Marsh did as he was asked, but he was livid about it.

Lakes returned to teaching in Golden in 1880, at what is now the Colorado School of Mines. He married and fathered three sons, and eventually retired from fossil collecting, perhaps prompted by Marsh's reluctance to let him share in the publishing of his finds. He went on to work for the U.S. Geological Survey and remained a productive writer throughout his life.