Top: Portrait from Darwin and the Science of Evolution by Patrick Tort
Bottom: Lichen illustrations from The Plant Hunters by Carolyn Fry

"At last gleams of light have come," Charles Darwin wrote to a friend years before the publication of On the Origin of Species, "and I am almost convinced (quite contrary to the opinion I started with) that species are not (it is like confessing a murder) immutable." The recipient of this confession was Joseph Hooker.

Educated in medicine at Edinburgh, Joseph Dalton Hooker became an assistant surgeon and (more importantly) botanist for an expedition to Antarctica, Tasmania, New Zealand, Australia, the Falkland Islands, and the southern tip of South America. The trip in the Erebus lasted from 1839 to 1843, and the young man had to pay for his own scientific equipment. But he managed to come home with specimens from more than 1,500 plant species.

He enjoyed the spotlight after his return to England, but only briefly, and a steady income eluded him for years. In 1845, he tried and failed to secure a university post at Edinburgh. He worked briefly for the British Geological Survey in 1846 and 1847, assembling a collection of fossil "thin sections" — fossil plants that had been polished into thin, translucent sheets. By the time the Survey started formally registering the thin-section collection, Hooker was off on another adventure. That gap between Hooker's assembly of thin-sections and the Survey's registering of those thin sections might account for the 165-year period where nobody knew where the thin sections were. They turned up in a Survey cabinet in 2011.

Hooker's next adventure was in India and the Himalaya. He set sail in 1847. In 1849, he was briefly imprisoned by the Rajah of Sikkim, whom the British threatened with severe retribution if he did not set Hooker free. In fact, Hooker ignored the Rajah's injunction against crossing the border into Tibet, challenging the Rajah to toss him into jail. Once released, the young naturalist spent another two years exploring before he returned home, this time with samples of 7,000 plant species. He also demonstrated his impressive skill as a scientific illustrator, filling his notebooks with fine sketches, such as detailed drawings of lichens. 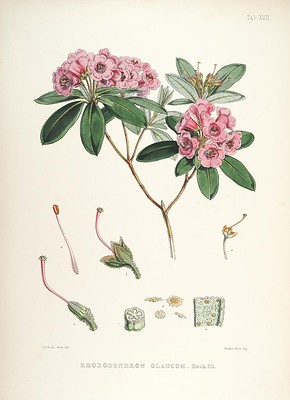 Hooker's Rhododendrons of Sikkim-Himalaya spurred a frenzy for the flowers among British horticulturalists. Image provided by the Biodiversity Heritage Library.

Upon his return from the Indian Subcontinent, he married Frances Harriet Henslow, daughter of the same professor who mentored Darwin. She bore him seven children before dying in 1874. He subsequently married Hyacinth Symonds, who bore him two more children.

Despite all his own achievements, Hooker was not entirely a self-made man. His father, William Jackson Hooker, a so-called botany professor at Glasgow University, actually spent years teaching medical students when medicine was less prestigious than it is today. While his son was voyaging, William Hooker became the director of the Royal Botanic Gardens, Kew. Joseph succeeded his father in this position, which was precisely what his father wanted — and maneuvered for years to achieve. Hooker's tenure at Kew involved occasional clashes with other powerful figures, and demands for greater public access to the gardens. He wanted non-specialists to visit the gardens only in the afternoon, leaving it quiet for professors and scientists in the mornings.

Like his father, Hooker practiced botany when the meaning of "botanist" was still being negotiated. While amateurs called themselves botanists, Hooker insisted that the term should be used more exclusively, namely for someone who oversaw a vast herbarium, as he did. In fact, the terms "amateur" and "professional" were also being negotiated. At the beginning of the 19th century, an amateur — someone who pursued an interest out of love, and who had the money and leisure time to do so — had more status than a professional, who had to work to pay the bills.

Hooker's own ambitions in botany led to some interesting working arrangements with amateur collectors. In fact, he used a network of collectors who sent him plants from all over the globe. Hooker enjoyed — and clearly depended on — their contributions, yet he wanted to save the right of naming species for himself. Even if ego influenced his views on the profession, he had good reason to restrict naming rights. Amateur collectors giving new names to known species was a recurring problem. Hooker once wrote in frustration to the Reverend William Colenso, "From having no Herbarium, you have described as new, some of the best known Ferns in the world." For his part, Colenso felt he had a greater right to naming the species of New Zealand as he lived there. Hooker tried to soften his criticism of Colenso by helping the man join scientific societies, naming plants after him, event dedicating his book on New Zealand plants to him. Other collectors, however, were often forgotten as Hooker's aim was largely to establish botany as a respectable science.

Hooker's boundless curiosity occasionally led down strange paths. Wondering about the origin of an obscure and aromatic dye known as Indian yellow, he fired off a letter to Britain's India Office. Months later, he received a reply from one of the office's civil servants, Trailokyanath Mukharji. Though the veracity of Mukharji's answer has been debated, it involved plants. Indian yellow, he explained, was made from the urine of cows subsisting on nothing but water and mango leaves. 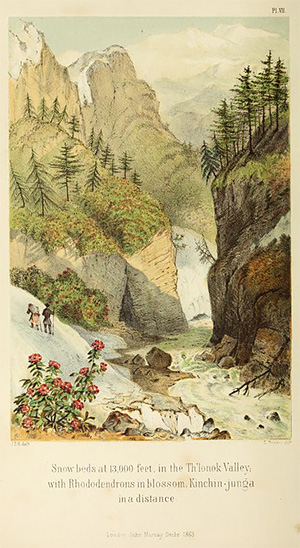 From Himalayan Journals by J.D. Hooker. Image provided by the Biodiversity Heritage Library. 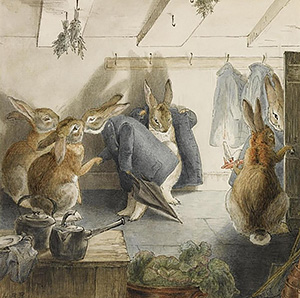 Botany might not sound like an express lane to success, but 19th-century Britain's wealth was built largely upon plant life, everything from wood to build ships to the exotic plant products those ships carried: spices, cotton, tea and opium. If Hooker could apply a mathematical precision to the numbers of species relative to genera at key locations, he could help the British Empire classify areas in terms of relative plant-life richness. He could also discern biodiversity loss. In the case of St. Helena, where Napoleon was exiled, Hooker observed that in less than four centuries, human influence had decimated the plant life, leaving most of the island "utterly barren."

In the years before Darwin made his theory of natural selection public, he regularly confided in Hooker, who urged him to publish. Sworn to secrecy by Darwin, Hooker eventually found himself in a difficult situation. When trying to unravel the tapestry of plant species collected from New Zealand, Hooker knew that Darwin's theory would explain the diversity perfectly. (Hooker's own botanical research lent considerable support to Darwin's theory.) But he couldn't discuss the theory until Darwin did. When Hooker published on the flora of New Zealand, he had to tiptoe around the issue. Darwin was nudged into publishing his theory by someone else. In 1858, the gifted young naturalist Alfred Russel Wallace sent a copy of his manuscript about natural selection (though he used different terminology) to Charles Darwin. Hooker and Charles Lyell arranged for both Darwin's and Wallace's papers to be read at the same Linnean Society meeting.

Though good friends who often agreed, Darwin and Hooker could look at the same problem differently. Darwin's theory explained patterns of plant distributions, a great help to Hooker. Yet the same fuzzy categories of plants — the things that would entice amateur naturalists to name new species — gave Darwin encouragement that his theory was correct: transition characteristics. Those same fuzzy characters just gave Hooker a headache.

Though he chose his battles judiciously, Hooker never shied away from defending natural selection, and championed T.H. Huxley in his famous debate with Samuel Wilberforce. For this, Hooker paid a price: He invited the wrath of Richard Owen, who tried for years to wrestle botanical collections away from Kew. In the end, Owen lost, and Kew commemorated the bicentenary of Hooker's birth in 2017.

In later years, Hooker traveled extensively, to Europe, North Africa, and the United States, and served as president of the Royal Society from 1873 to 1878 — the first naturalist since Joseph Banks to preside over the society. Although a significant number of capable scientists stood by Darwin through the controversy surrounding natural selection, it was Joseph Hooker whom Darwin considered his most consistent ally.

Narrative text and graphic design © by Michon Scott - Updated May 21, 2022