In 1645, gardener and diarist John Evelyn visited the curiosity cabinet established by Ferrante Imperato. Evelyn described it as:

. . . one of the most observable palaces in the citty, the repository of incomparable rarities. Amongst the naturall herbals most remarkable was the Byssus marina and Pinna marina; the male and female cameleon; an Onacratulus, an extraordinary greate crocodile; some of the Orcades Anates, held here for a great rarity; likewise a salamander; the male having an hollow in the back, in wch it is reported the female both layes and hatches her egg.

If the terms Evelyn used sound strange today, the specimens he saw must have looked even stranger at the time.

Born around 1525, Imperato was a Neapolitan apothecary and herbalist with a broad range of interests. Not many details are known about his personal life, but it appears he constantly looked for new remedies, and the useful objects he collected eventually took up so much room that he had to find extra storage space for them. At some point, he must have realized that the objects were pretty interesting, independent of their potential curative powers. He began allowing visitors into a room next to his apothecary shop. Besides the diarist Evelyn, Imperato's visitors also included members of the ambitious science academy, Linceans (or Lynceans).

Imperato's collection of animal, mineral and vegetable oddities included stuffed terrestrial and marine animals, stuffed birds, shells, stones, gems and fossils. His botanical collection of pressed plants filled 80 volumes, and a recent study estimated that the original collection (most of which is long gone) may have included more than 35,000 specimens. 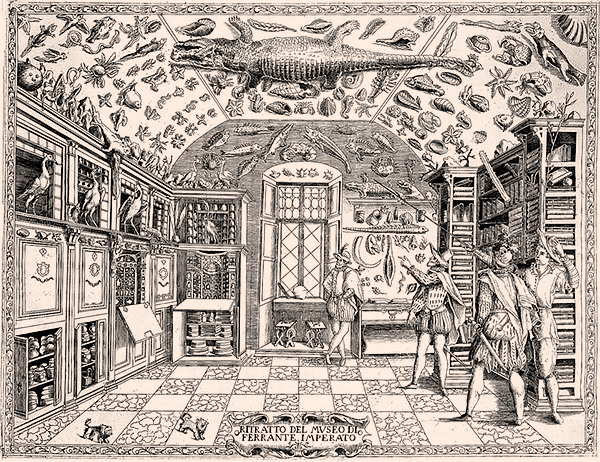 From "Imperato, Cirillo, and a Series of Unfortunate Events: A Novel Approach to Assess the Unknown Provenance of Historical Herbarium Specimens" by De Natale and Cellinese in Botanical History

Visitors to Imperato's museum might have been most impressed by the crocodile dangling from the ceiling. Or the Egyptian mongoose wandering his living quarters. As this illustration indicates, it may have been the largest specimen, but it was surrounded by equally fascinating, if smaller, fauna. By hanging fauna from the ceiling Imperato likely hoped to avoid distracting visitors' attention from the mineral and vegetable specimens along the museum's walls.

After he set up his museum, perhaps encouraged by friends and family, he documented his curiosity cabinet. Dell'Historia Naturale (Natural History) numbered nearly 800 pages, with 119 woodcuts. The woodcut showing his museum, released in 1599, is quite possibly the earliest published illustration of a curiosity cabinet. Moreover, Imperato's book was the first comprehensive natural history book that was written in Italian, as opposed to written in or translated from Latin.

Besides his own natural history book, Imperato has been credited with producing the first modern translation of On Stones by Theophrastus. Imperato probably didn't translate directly from the Greek original, but from a Latin translation. Either way, he was apparently ahead of the first widely acknowledged translation, John Hill's in 1746.

Imperato didn't just put his best specimens on display or publish books about them. He also performed demonstrations for visitors. While some naturalists could decide who merited a demonstration and who did not, Imperato probably couldn't afford to be so uppity. We was, after all, just a lowly apothecary, and his visitors often enjoyed a higher social status than he did. One of his favorite materials to toy with — he illustrated experiments in his natural history book — was asbestos. Today we think of asbestos as a carcinogen to be avoided, but in Imperato's day, it was an object of intense fascination — a fibrous rock that could be woven into cloth and cleansed by exposure to fire. (And to be fair, plenty of savants ingested mercury in those days. Imperato didn't take ridiculous risks by the standards of the time.)

Not only notable for what it included, Imperato's collection was perhaps just as important for what it did not include: speaking tubes, fun-house-style mirrors, or magic lanterns. In fact, although he was long acquainted with the virtuoso Giambattista Della Porta, he took a dramatically different approach to studying nature. Whereas Della Porta saw natural history as a stepping stone to natural magic, Imperato evidently found nature fascinating enough in its own right. And he differed with Della Porta on the origin of fossils, recognizing their organic origins. This was substantial progress in an age when many believed fossils were just the Earth playing pranks. Likewise, he examined enough toad crania to conclude that toadstones didn't form in toad heads; they were just stones.

A nature lover in his own right, Imperato's son Francesco managed the collection for some time after his father's death in 1621, but the collection was dispersed in the mid-17th century, perhaps amid the upheaval of a plague, by descendants who probably didn't appreciate the collection's importance.