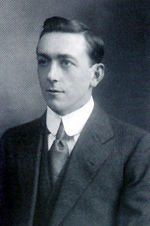 From The Dating Game by Cherry Lewis

Radioactivity is perhaps best known for its role in weapons and X-rays, but in the early 20th century, a bright young man pioneered its use in calculating the age of the Earth. Because radioactive decay happens at a steady rate, it enables us to date rocks by measuring the amount of the original unstable element and the resulting "daughter" element. Early attempts to date rocks in this way measured the amount of helium given off in the decay process, but when scientists realized that they couldn't capture all the helium, the young Arthur Holmes pointed to an alternative: lead. He demonstrated his dating abilities early on by estimating rock samples from various geologic periods. He gave a Carboniferous sample an age of 340 million years, a Devonian sample an age of 370 million years, and a Silurian sample an age of 430 million years. All three estimates fall with the time spans given by present-day geologists for those periods.

Unfortunately, measuring the amount of a radioactive element and its stable daughter element has never been a straightforward process. This meant that Holmes spent the rest of his career refining his estimate for the age of the Earth. One of his earlier estimates of the age of our planet ranged from 1.46 billion and 3 billion years. In 1946, he had enough evidence to announce that the Earth was at least 3 billion years old, and probably older. His final number was ultimately overturned by other scientists in the 1950s, who estimated an age of over 4.5 billion years, but he laid the groundwork for radiometric dating.

Holmes began his research at a crucial time. In the late 19th century, the renowned physicist Lord Kelvin had announced that the Earth could be no older than 20 million years, and most geologists were skittish about assigning an age to the Earth greater than 100 million years. These estimates were based on the idea that the sun and the Earth were both cooling from a molten state, unable to sustain their current temperatures. The discovery of radioactivity explained how both the Earth and the sun could generate their own heat.

Holmes made another significant contribution to geology. Years before the scientific community accepted Alfred Wegener's theory of continental drift, Holmes hypothesized (pretty correctly) how it could have happened. In a textbook he authored in the 1940s, he suggested that continents could move through convection currents in Earth's mantle. Today, geologists accept a theory similar to what he proposed. Yet plate tectonics would not be widely accepted by geologists until after Holmes's death, and Holmes himself confessed in 1953, "I have never succeeded in freeing myself from a nagging prejudice against continental drift."

From a family of modest means, Holmes struggled to make ends meet for much of his life. He attended the Royal College of Science in London on scholarship, but the scholarship wasn't enough to cover his expenses. He took time off from school to earn money on a prospecting mission to Mozambique. There he contracted malaria, which recurred occasionally for the rest of his days. A few years later, finding a college demonstrator's salary to small to support his new family, he took a management position with an oil company in Burma. While in Burma, Holmes and his wife lost their son to dysentery and — because the oil company went bankrupt — returned to England penniless. Holmes did eventually find financial security, as well as a new love that blossomed well before his first marriage ended. The scandal shadowed Holmes and his new wife (geologist Doris Reynolds) for some years.