From The Dinosaur Papers edited by Weishampel and White 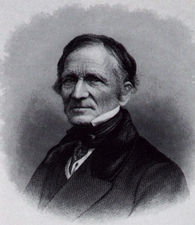 In 1836, Edward Hitchcock delivered a report to the American Journal of Science about "remarkable footmarks in stone in the valley of Connecticut River, which have since awakened so much interest among intelligent men." The remarkable footprints, for which he would be most remembered many years later, we just one aspect of a productive life.

Hitchcock was a man of contradictions. Born in 1793, he was, by his own admission, a handful as a child but he appreciated the mentorship of a scientifically inclined uncle. He embarked on months-long travels (geological surveys, a trip to Europe, a trip through the Midwest) but he spent his entire life as a resident of a small region, within about 15 miles of Amherst, Massachusetts. He never earned a degree but he taught for decades at Amherst College, even becoming the institution's president. He fretted continually about his frail health but he lived to be nearly 70 — a good run in those times. He believed in the inerrancy of the Bible but he gathered evidence that undermined a literal reading of it.

Before taking up teaching at Amherst, Hitchcock taught at a local school, Deerfield Academy. He fell in love with Orra White, who was herself a teacher at Amherst Academy. They married in 1821. The young couple collaborated on almanacks and unofficial fauna surveys. They married about the same time that Hitchcock was ordained as a minister. A Calvinist, he delivered fire-and-brimstone sermons, but also orated on the evils of slavery. Before long, he traded in the life of a pastor for the life of a teacher, which he believed would be less strenuous, though the career transition nagged at his conscience.

To prepare for teaching at Amherst College, Hitchcock embarked on a crash course in chemistry, which he subsequently taught from 1826 through 1845. In 1830, he accepted a commission as the first state geologist of Massachusetts. In later years, he enlisted his sons in the surveys. Geological work challenged some of Hitchcock's early notions. Eventually, he characterized rock strata he examined as covering "periods of duration inconceivably long." Besides doubting whether the Ark could really hold all those animals, Hitchcock expressed doubts about whether the Noachian flood could really account for all the geological phenomena he saw, and came to accept a better explanation for striations and moraines: glaciers.

Perhaps more intriguing than the calling cards of glaciers were those footprints. Throughout his life he collected over 20,000 fossil footprints, and the specimens he assembled still survive today at the footprint museum at Amherst College.

The footprints looked like the tracks of giant birds. In fact, they were commonly referred to as giant turkey tracks, and Hitchcock frequently proposed big birds as the makers. Hitchcock's assumption might seem quaint today, but it's important to remember the times in which he worked. He delivered his report several years before Richard Owen even named the Dinosauria, when the only known dinosaur fossils were fragmentary. The prevailing view of ancient reptiles was that they were like today's lizards, just many times the size. Only with later discoveries, such as the first relatively complete dinosaur skeleton of Hadrosaurus foulkii did paleontologists realize that some dinosaurs were bipedal. And when Hitchcock published another report in 1858, Ichnology of New England, he considered the possibility, based on occasional tail impressions, that the "giant birds" who made the tracks might have had some reptilian characteristics. In fact, he debated with himself for decades about what kinds of animals left those tracks. 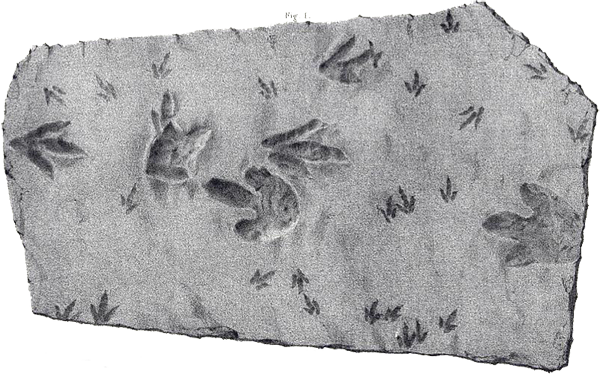 In examining the tracks, Hitchcock demonstrated some impressive logic. He undertook extensive comparisons between the fossil tracks and those of modern birds, and he identified several potential species among the track makers. He speculated (correctly) that many more fossil tracks might be found if quarries were to be opened. He also reasoned that tracks on inclined rocks were probably originally made of level ground, remarking, "There is no appearance as if the animal had scrambled upwards, or slid downwards, except in one or two tracks of great size, where the mud appears to have been rolled up a few inches before the feet." Unfortunately, the names he applied to the tracks have not fared well over time; 21st-century paleontologists have called his naming convention a "nomenclatural morass." Some of the track-rich stone slabs themselves have fared better and can still be seen at Amherst College.

His ongoing work with the footprints had a dark side. A big sandstone slab rich with footprints was first brought to his attention by Dr. James Deane of Greenfield, Massachusetts. Hitchcock and Deane had a cordial relationship at first, but it soured, and they quarreled over priority for many years. In fact, neither man deserved credit as the discoverer of the tracks; they had been known about before either man examined them. It's arguable now that, although Deane saw them first, Hitchcock studied them more intensely. 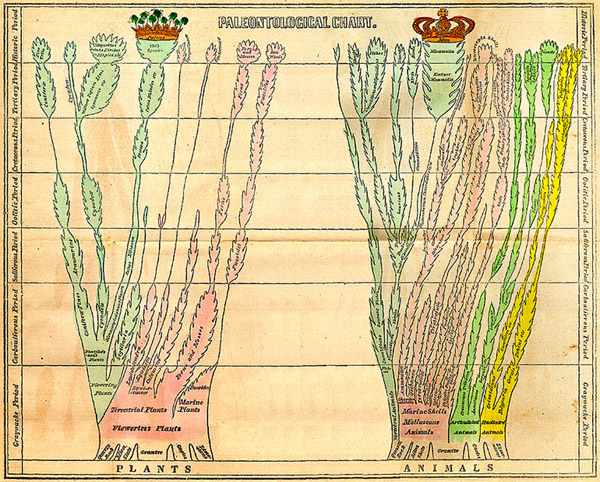 Like many of his contemporaries, Hitchcock rejected transmutation (evolution). In his Elementary Geology, Hitchcock included a foldout Paleontological Chart (likely illustrated by his wife) showing nonevolutionary trees mapped to geologic time. But Hitchcock was, in the end, no biblical literalist. He may have started his career thinking the Bible told all anybody needed to know about Earth's history, but by the end, he conceded that the Bible was no scientific textbook.

As a young man, Hitchcock suffered a mysterious, temporary loss of his eyesight. That may have been the beginning of his lifelong obsession with his frail health. For decades, he fretted about his heart and lungs, and suffered frequent digestive complaints. Far removed from today's sensibilities, he advised achieving digestive health through the consumption of bread and milk — gluten and dairy.

Of course, longevity was fairly unlikely in Hitchcock's day. Like other parents, they knew what it was like to bury a child. When delivering sermons, he reminded parishioners to look to the states of their own souls, and reminded them just as often that he was unwell. He didn't shield his own children from his health worries; he told them about it often. In his 30s, he noted in his journal that he would likely die before his children were old enough to remember him. In fact, he lived another 35 years. He outlived his wife. When his children were a bit older, Hitchcock noted in his journal that they no longer took him very seriously when he talked about his imminent death. He died in 1864, roughly a year after he lost his wife. He left his estate to their surviving children, and newspapers across the United States reported on his passing.