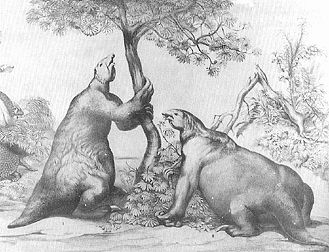 From Scenes from Deep Time by Martin J.S. Rudwick

People may elbow each other and chuckle today, but at that time they were unveiled at Sydenham Hill in the early 1850s, the Crystal Palace reconstructions of ancient life by Benjamin Waterhouse Hawkins were among the best in the world. Under the direction of Sir Richard Owen, Hawkins built iguanodons, megalosaurs, ichtyosaurs, megatheres and others, to the delight (and sometimes the horror) of 19th-century British visitors. In the 50 odd years after their completion, the models would be viewed by over a million visitors each year. Whether or not the visitors noticed, the animals were arranged in sequential order, related to the rock layers where their fossils had been discovered. 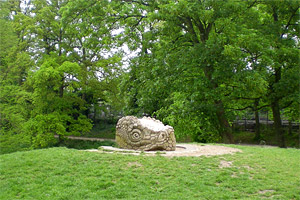 One of Hawkins's sculptures at Crystal Palace Park, London. Photo by Michon Scott.

In sculpting these fossils, Hawkins was overseen by Richard Owen, after the project was turned down by Gideon Mantell. Owen was only too happy to step in, and order articulations that contrasted sharply with what Mantell would have advocated. Determined to discredit contemporary theories of evolution, as well as his rival Mantell, Owen directed Hawkins to give the dinosaurs distinctly mammalian articulations. Owen aimed to promote the notion that dinosaurs — like mammals in the succeeding geologic era — were the highest forms of life on Earth at the time, and therefore resembled mammals in their bearing. Not everyone agreed; contemporary naturalists John Edward Gray and John Lindley criticized the articulations and the presence of modern vegetation around them. Due partly to this kind of criticism, and partly to a lack of funds, the Crystal Palace project was halted in 1855. Despite this disappointment, Hawkins adopted and retained Owen's anti-evolution stance.

The reconstructions, inaccurate as they may have been, were architectural marvels. Hawkins recounted years later:

Some of these models contained 30 tons of clay, which had to be supported on four legs, as their natural history characteristics would not allow of my having recourse to any of the expedients for support allowed to sculptors in an ordinary case. I could have no trees, nor rocks, nor foliage to support these great bodies, which, to be natural, must be built fairly on their four legs. In the instance of the Iguanodon, it is not less than building a house upon four columns, as the quantities of material of which the standing Iguanodon is composed, consist of four iron columns 9 feet long by 7 inches in diameter, 600 bricks, 650 5-inch half-rounded tiles, 900 plain tiles, 38 casks of cement, 90 casks of broken stone, making a total of 640 bushels of stone.

The Iguanodon model was big enough to accommodate a table and chairs for paleontology's glitterati at a New Year's Eve party held December 31, 1853. Hawkins threw the party, and Owen sat at the head of the table, i.e., inside the head of the dinosaur. 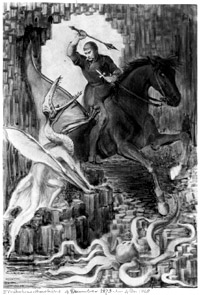 From "Lasuén's Pterodactyl: An Early Use of a Pterosaur in Plastic Arts" by Knoll and López-Antoñanzas in Comptes Rendus Palevol

As popular as they were with the public, the Crystal Palace sculptures weren't universally admired. British Museum curator John Edward Gray called them a "Crowning humbug" assembled on "what is known to be erroneous grounds." The sculptures began to age poorly long before Hawkins's life was over. Fifty years after their unveiling, their inaccuracy haunted paleontologists who shied away from reconstructing dinosaurs based on newer finds.

After the Crystal Palace project ended, Hawkins took up a new career as a popular lecturer. Among his favorite topics were pterosaurs and dragons, as he was convinced that the fossils of the former spawned the legends of the latter. When illustrating Saint George defeating the dragon, he made the vanquished dragon look remarkably like a pterosaur.

Despite his success on the lecture circuit, Hawkins hoped to be reinstated at Crystal Palace, but it didn't happen. Instead, he sold lithographs of the sculptures that might have been. For dinosaur admirers who wanted a little slice of Crystal Palace Park at home, he sold mail-order miniatures of his existing sculptures.

In 1868, Hawkins made the first of two trips to the United States. By the time he arrived, naturalists' understanding of dinosaur articulation had improved, aided by the discovery of a nearly complete Hadrosaurus foulkii. Under the guidance of Joseph Leidy at the Academy of Natural Sciences in Philadelphia, Hawkins developed a model of the hadrosaur skeleton. The fossil was lacking a skull, so Hawkins sculpted one, loosely based on the skull of a modern-day iguana. After the skeleton model was put on display, some 100,000 visitors came to see it — almost twice the number of visitors to the museum in the previous year. The academy eventually started charging admission, precisely to thin the crowds. 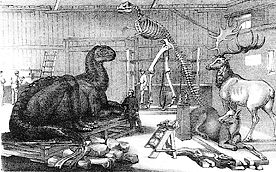 Spurred by his success with the hadrosaur, Hawkins began making grand plans for a Paleozoic Museum in New York's Central Park, invited by the park's comptroller in 1868. The project ultimately failed, likely because everyone wanting to do business in New York had to find a way to benefit the notorious William "Boss" Tweed. Tweed apparently couldn't figure out a way to reap kickbacks from the proposed museum, so he ordered its foundations plowed under, claiming that the price tag for the museum would be too high. When Hawkins spoke out against Tweed and his plans, Tweed sent vandals to destroy the models, and later his molds. Exactly where the dinosaur model parts wound up remains something of a mystery, although some urban explorers keep looking under Central Park.

Disappointment didn't completely define Hawkins's visit to the U.S., however. He gave numerous lectures, many of them about the wrongheadedness of evolution. It was an ironic choice considering he had worked with Charles Darwin decades earlier, helping illustrate Darwin's account of the Beagle voyage, and recently worked with Leidy, who accepted evolution. Even stranger, Darwin's own "bulldog," Thomas Henry Huxley, had wholeheartedly recommended Hawkins to his friends overseas, and Hawkins had illustrated a comparison of human and ape skeletons for Huxley's book Man's Place in Nature.

Although Hawkins never did accept evolution, Darwin's theory of natural selection did influence his work to some degree; in his last project, at Princeton University, Hawkins painted more violent, more competitive dinosaur tableaux. His commission was to paint 17 scenes of prehistoric life, and 15 of them still survive.

Hadrosaurs trying to escape the dinner menu in a Princeton University painting. From All in the Bones by Bramwell and Peck.

Hawkins spent years on his first visit to the U.S. He briefly returned to England, then hustled back to America again in 1875, perhaps chased from home by domestic troubles. Hawkins had engaged in a colorful marital life. Before he turned 20, he married his first wife and began producing several children. About 10 years later, he married his second wife. Trouble was, he never divorced Wife Number 1 — a situation greeted without good humor by Wife Number 2, especially after decades of what she had believed to be a legitimate marriage that produced legitimate children. By the time she received the unwelcome news, Hawkins's first wife had likely entered a convent. After Wife Number 1 died, Hawkins (re)married his second wife, but late in his life, he suffered financial difficulties, and became heavily dependent on the children from his first marriage.

Modern historians have observed that Hawkins lacked the academic credentials of most of his peers, yet he proved to be one of the most effective popularizers of natural history of the Victorian age. In the Crystal Palace reconstructions and the hadrosaur model, as well as paintings he produced for various institutions, Hawkins extended the appeal of dinosaurs well beyond the circle of scholarly gentlemen who traditionally studied the extinct reptiles.