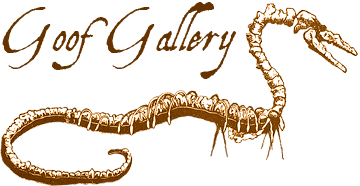 Did you ever make a mistake the first time you tried something? So did these people. Here is a collection of mistakes about living and extinct organisms. But as much as these pictures might amuse you (some are pretty funny, others aren't) try to carry a little compassion in your back pocket.

In The Lore of the Unicorn, Odell Shepard wisely observed that although few medieval Europeans saw lions, panthers or elephants, they accepted the animals' existence "upon evidence in no way better or worse than that which vouched for the unicorn." Centuries ago, no one had cameras, cell phones, or an associated press service; all anyone had to distinguish between truth and fiction was a description, sometimes accompanied by an illustration. Sometimes the people who saw the illustrations or read the descriptions believed the accounts; sometimes they didn't. Penned in the 7th or 8th century, Liber Monstrorum warned readers at the outset that most of the stories it relayed were probably lies. Yet in the midst of tall tales and fabrications, increased travel led to the discoveries of very real elephants, anteaters, ostriches and apes. Believing too little could be as bad as believing too much.

There was another reason for the importance attached to weird curiosities. Objects believed to be unicorn horns or dragon bones were also believed to cure disease. Shepard remarked that centuries ago, Europeans "loved their children somewhat as we do ours. It was by such means as these that they tried to keep them." And perhaps most important of all, others will someday look back on the turn of the 21st century and share a good chuckle over some of our latest and greatest theories.

Illustration shown on this page from Monsters of the Sea by Richard Ellis. See References for more information.