Praise has been heaped upon paleoanthropologist Lee Berger for hiring a number of women for crucial roles in the excavation of Homo naledi in South Africa, but archaeologist Dorothy Garrod beat him to that gender-equalizing trick by the better part of a century. Starting in 1929, she oversaw excavations at Mount Carmel, Palestine, and hired many local women to do the fieldwork. She appreciated their work, as well as the fact that their wages helped support their families. In 1996, Mary Kitson Clark, the last of those women still living, then aged 92, remembered Garrod as "small, dark, alive!" 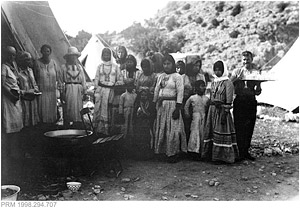 From A Pioneer of Prehistory: Dorothy Garrod and the Caves of Mount Carmel at Pitt Rivers Museum, Oxford

Garrod was born in England in 1892. In the First World War, her father, Sir Archibald Garrod, was stationed in Malta as the director of war hospitals. Dorothy Garrod spent time in Malta after the Great War, and developed in interest in archaeology. By that time, she had already studied history at Newnham College, Cambridge. Returning to England from Malta, she enrolled at Oxford to study archaeology. She had lost three brothers in WWI, and she wanted to continue her family's long legacy in academic achievement. After graduating from Oxford, she went on to work with the Abbé Breuil at the Institut de Paleontologié Humaine, Paris. At that time, France was perhaps the epicenter of prehistoric archaeology; archaeologists classified ancient artifacts based on a system devised by 19th-century archaeologist Gabriel de Mortillet. Breuil began to revise Mortillet's system, and Garrod continued Breuil's work.

Breuil and Garrod ranked among the first archaeologists to think globally about human prehistory. That might not sound like much of a breakthrough today, but consider the times. Garrod began working with Breuil in the early 1920s. Anthropologists and paleontologists still believed Piltdown Man to be a valid human ancestor. Eugène Dubois had discovered Java Man (the first recognized specimen of Homo erectus) in the late 19th century, but for a variety of reasons (including Dubois's own prickly personality), the find hadn't enjoyed widespread acceptance. Charles Darwin had surmised that early humans arose in Africa, but his astute prediction wasn't very popular among early-20th-century anthropologists. So after Raymond Dart described Australopithecus africanus in 1925, he had to wait decades for the fossil to be accepted as a human ancestor. In an age of widespread prejudice and eugenic enthusiasms, many Europeans eschewed ancestors outside Europe. For Garrod to excavate elsewhere was an innovation. And excavate elsewhere she did.

Between 1923 and 1963, Garrod conducted archaeological digs in France, Britain, Gibraltar, Bulgaria, Lebanon, Palestine and Iraq. On Gibraltar, she excavated Neanderthal sites, including a child she nicknamed Abel. Perhaps her most important fieldwork occurred at Mount Carmel, Palestine. Fieldwork there picked up speed ahead of the construction of Haifa Harbor as archaeologists feared that the site would be quarried right out of the harbor's way. In a Mount Carmel cave named Skhul, she found apparent remains of at least 10 modern Homo sapiens; in a nearby cave named Tabun, she found remains of at least two people with Neanderthal characteristics. She studied and classified some 92,000 artifacts from Mount Carmel, and the sites she oversaw there eventually yielded a nearly continuous succession from the Old Stone Age to the Middle Stone Age.

Garrod was especially interested in the chronology of archaeological evidence, and in 1938, she argued that the terms Lower, Middle and Upper Paleolithic should be used purely to denote time periods, not types of tools. Early on, starting in her first excavations on Gibraltar, she included observations of flora and fauna in her archaeological research. She may have been the first archaeologist to incorporate aerial photography into her work. When time for fieldwork was limited, she innovated, removing dirt and rock in large blocks that could be teased apart later. In later years, as her health declined, she found a way to stay in the game, observing the excavation from a nearby, well situated seat.

Garrod was elected to the Disney Chair of Archaeology in 1939 (named for the academic John, not the animator Walt). She was awarded the professorship nine years before Cambridge awarded any degrees to women. Reflecting on her new post, she wrote:

The election was a tremendous surprise to me, as I had never seriously considered it possible. Naturally, I am tremendously pleased, and I hope it may quickly lead to full membership of the University for women up here.

Garrod took time away from the professorship to help the war effort in WWII, interpreting aerial photos for the Women's Auxiliary Air Force. She retired from the post in 1952.

Thanks to Garrod, Cambridge became the first university in the United Kingdom to offer undergraduate courses in prehistoric archaeology. In 2009, when Cambridge celebrated its 800th anniversary, Garrod figured among the luminaries commemorated in caricature by Quentin Blake.