In 1771, Benjamin Franklin recounted the story of his life to his son William, remarking:

From the poverty and obscurity in which I was born and in which I passed my earliest years, I have raised myself to a state of affluence and some degree of celebrity in the world.

If the statement sounds immodest, it probably was, but he was honest. In listing the reasons for writing his autobiography, he included:

And lastly (I may as well confess it as the denial of it would be believed by nobody) I shall perhaps not a little gratify my own vanity. Indeed, I never heard or saw the introductory words, "Without Vanity I may say," etc., but some vain thing immediately followed. Many people dislike vanity in others whatever share they have of it themselves, but I give it fair quarter wherever I meet with it, being persuaded that is it often productive of good to the possessor and to others who are within his sphere of action. And therefore, in many cases it would not be altogether absurd if a man were to thank God for his vanity among the other comforts of life.

Perhaps his vanity helped keep Franklin in a good mood. He had certainly earned the right to at least some of it.

Born in Boston in 1706, Benjamin was the 15th child out of 17, and the youngest boy. Early on, his parents realized that he was exceptional, and they sent him to school. But with so many other mouths to feed, his father finally decided against lavishing so much money on the education of one child, so Benjamin's formal education ended when he was just 10. Naturally, the boy wanted to be a sailor. Instead, he wound up apprenticed to his older brother James in a print shop. Benjamin learned a great deal, but he and his brother clashed. Still in his teens, the younger Franklin ran away to Philadelphia. Not long after arriving in the bustling city, the young man landed a plum assignment; Governor William Keith sent him to London to buy printing equipment. 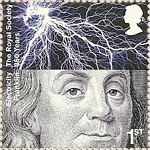 To be given such an important job by a governor — before even turning 20 — sounded entirely too good to be true. In fact, it was. On the other side of the Atlantic, Franklin realized his patron was unreliable and, penniless, had to find work in another print shop. Two years later, he returned to Philadelphia and started a business of his own. Within several years, he was printing Poor Richard's Almanac, that witty series of publications with observations such as "Fish and Visitors stink in three days," "The worst wheel of the cart makes the most noise," and, perhaps most observant of all, "Old Boys have their Playthings as well as young Ones; the Difference is only in the Price."

The youthful Franklin sewed a wild oat, resulting in his son William. Franklin later entered into a common-law marriage with Deborah Read. Besides starting a family and working as a printer, Franklin kept busy with civic pursuits, including forming a self-improvement club (the Junto Society), establishing a fire department, setting up a matching-grant system to fund the Pennsylvania Hospital, printing counterfeit-resistant money (he used actual leaves in the designs), and promoting inoculations (the precursor of vaccinations) to guard against smallpox. A tragic irony in Franklin's inoculation campaign was that his younger son, Francis Folger Franklin, died without one. Franklin intended to perform the procedure, but wanted to wait until the boy recovered from a gastrointestinal disorder. Then it was too late.

Franklin could have enjoyed a comfortable living as a printer for the rest of his life but, as historians have observed, his wouldn't have become a household name if he had simply stuck with printing. In his early 40s, he retired from the business and took up experimentation, particularly with electricity. Franklin's 1752 kite experiment, revealing the electrical charge carried by clouds, made him an instant celebrity. Both Harvard and Yale awarded him honorary degrees, but in those days, even the highest institutions of learning in the American colonies were backwaters. The real action was in England. Luckily for Franklin, Quaker networks had already relayed news of the clever printer's electricity experiments in the City of Brotherly Love to the Royal Society in London. In 1757, he returned to the seat of power.

Franklin's first arrival in the mother country had been inauspicious, but his second was a different story. He was now the darling of the Royal Society, which even today, ranks among the world's most prestigious scientific associations. Basking in the glow of their adulation, he started to rack up medals. But the real business that sent Franklin to England was to try to resolve a dispute between the colony of Pennsylvania and its effective owners, the Penns. Negotiations grew acrimonious. Franklin returned to America in 1762. In 1764, he was back in England.

While Franklin traveled to England, his wife Deborah stayed behind, unwilling to cross the Atlantic. Franklin's relationship with her reveals his complicated opinions about women and people of color. Accounts differ as to how much he advocated the education of women. Barely literate Deborah spelled her words as best she could ("your a feck shonet Wife.") Not until he was in England in the 1750s did he begin meeting women he could consider his intellectual peers. Yet whatever accomplishments she lacked in spelling, Deborah did convince her husband to visit a school for black children where he found, to his surprise, that their abilities matched those of white children. He began to question his prior acceptance of slavery. Near the end of his life, he openly criticized the institution.

During Franklin's final extended stay in England, his wife suffered a series of strokes. In earlier years, he had experimented with the application of electricity to the human body to treat stroke-induced paralysis. By the time Deborah began to suffer from strokes, Franklin had given up hope that electroshock therapy could undo the damage, though he realized it could work for other disorders such as depression. By the time he returned to America, on the eve of the Revolutionary War, Deborah had died.

That savants would experiment with applying powerful jolts of electricity to treat illness says something about how much hope they vested in this newly discovered phenomenon. In fact, Americans and Europeans alike assumed that electricity had stupendous power — especially in the hands of Dr. Franklin. A newspaper in New Jersey claimed he could use electricity to move landmasses and control the ocean's behavior. Britons feared that he had a tool as tiny as "a toothpick case" that could incinerate a cathedral. Franklin, of course, knew better. He also knew better than to believe the outlandish claims about a new fad: mesmerism.

In the late 18th century, Franz Anton Mesmer claimed that animal magnetism could affect just about everything and, further, that he knew how to manipulate that mysterious force to heal the sick. Authorities in Vienna had already sent Mesmer packing. After he set up shop in France, Franklin was one of the people called in to test his claims, in 1784.

Franklin had arrived in France shortly after the American Revolution began, to lobby for assistance against the British. If Franklin had been a celebrity in England, he was a virtual rock star in France. The king was said to grow so tired of seeing Franklin's picture that he commissioned a special portrait of the American savant — at the bottom of a chamber pot. By now, Franklin had given up fancy curled wigs in favor of a fur hat. Besides helping him cultivate his image as a plain, trustworthy American, the new look was largely practical; a skin condition (likely psoriasis) made itchy wig wearing unbearable.

To test Mesmer's claims, Franklin devised an ingenious experiment. A follower of Mesmer magnetized an apricot tree then asked a perpetually sickly boy to demonstrate the force's effectiveness. Mesmerism "worked" by inducing a "crisis," but the boy had to identify the near-magical tree while blindfolded, so cues from the magnetizing doctor couldn't affect his behavior. Sure enough, the boy had a crisis near the tree he felt sure was magnetized. Trouble was, he had the wrong tree. At least among those who looked at the evidence, mesmerism was dead. Franklin had helped invent the double-blind clinical study.

Franklin knew that the most valuable skill a doctor could have was the ability to spot a worthless cure, and near the end of his life, he surely would have delighted in cures for the ills that plagued him. He had a huge kidney stone, as well as painful gout. When a French lady friend suggested that his gout resulted partly from too many favors from the feminine sex, he countered that he had enjoyed such favors far more often when young and gout-free. In jest, he appealed to her "Christian charity" to help him out now. It didn't work.

Ironically, Franklin was partially aware of the culprit that likely contributed to his stone and gout. As a young man, he had been warned to take care when handling type in the print shop, to avoid lead poisoning. He took the advice, but didn't know that the wine he drank in later years was tainted with the same substance.

Franklin suffered late in his life, but he lived into his 80s, perhaps helped by a sensible lifestyle. Throughout his adult life, he advocated moderation in food and drink, fresh air, and exercise. While others blamed colds and fevers on cold or moist air, Franklin pointed toward contagion spreading from infected people, and enumerated the dangers of poorly ventilated rooms. He even invented a fireplace that effectively sent heat into the house and sent smoke outside. Though he could have made a sizeable profit from his invention, he refused. 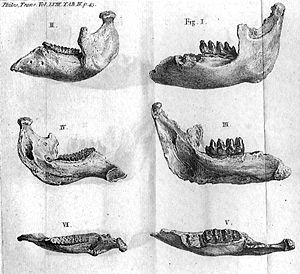 In between his other achievements, the polymath Franklin found time to examine fossils from Kentucky's Big Bone Lick. Stumped by what he found, collector George Croghan sent specimens to Franklin, who examined them in 1767. Franklin recognized some similarities to elephants, but also some important differences. In fact, he was looking at mastodon remains. He speculated that "perhaps the climates were differently placed from what they are at present." Widespread acceptance of the notion of extinction was decades away, and Charles Darwin's proposal of natural selection lay nearly a century in the future. Like Thomas Jefferson, Franklin preferred migration to extinction in explaining why the animals no longer lived in the same place.

Although Charles Darwin's hypothesis was a long way off, Franklin was friends with the naturalist's grandfather, Erasmus Darwin. That, like his friendships with Joseph Priestly and Joseph Banks, survived the hostilities of the American Revolution. As Franklin contributed to revolutionary fervor in the colonies, his comrades in the Royal Society backed his approach in a debate about the appropriate shape of lightning conductors, outraging King George III. In 1775, when hostilities between Britain and the colonies had started, Franklin ordered American warships to leave James Cook and his Resolution crew alone as they returned home. As members of the Republic of Letters, the American and British savants were able to continue communicating with each other (Erasmus Darwin, for one, sympathized with the colonists' cause), but they were all relieved by the war's end. Franklin's relationship with his son William, however, didn't survive the war so well; William was a resolute loyalist.

Accompanied by grandsons, angora cats, and roughly two tons of luggage, Franklin traveled across the Atlantic a final time in 1785. On that trip, he continued his observations of the Gulf Stream, which he had diagrammed years earlier. He spent his last years in America, helping frame the U.S. Constitution.