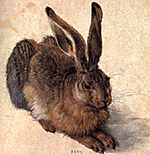 From Nature's Artist by Victoria Salley

For God often gives the ability to learn and the insight to make something good to one man the like of whom nobody is found in his own days, and nobody has lived before him for a long time, and nobody comes after him very soon.

Considering he was writing about himself, Dürer's observations can be called a little arrogant, but he was exactly that talented. Around 1560, the Medici Duke Cosimo I included the portrait of just one foreign painter, "Alberto Durero," in a collection of artist portraits that enshrined Leonardo da Vinci, Michelangelo and Titian.

In Hungary, Dürer's grandfather left the traditional family business of livestock breeding to try his hand as a goldsmith. Dürer's master-goldsmith father moved from Hungary to Nuremburg, where he thought his own goldsmith-business prospects might be better, and married a woman also from a goldsmith family. Born in 1471, Albrecht apprenticed with his father, but as he later remarked, "I was more inclined towards painting." In his early teens, the young Dürer drew a self-portrait that could shame the skills of most adults. His father apparently decided that, if the boy was going to be a painter, he was going to learn from the best, and sent his son to work as an apprentice in Nuremberg's most prestigious artist workshop.

Nuremberg was a wonderful place for a budding artist. Known for technical innovations, the city enjoyed a bustling trade with several countries, and astronomers and nautical travelers flocked to the city for its high-quality astrolabes and compasses. Though it had no famous university, Nuremberg was a glittering jewel of arts and sciences, as well as publishing. Dürer's godfather, Anton Koberger, was a goldsmith-turned-printer who operated one of the city's biggest presses. Koberger's books included frequent woodcuts, and Dürer could make better woodcuts than just about anybody else. Whereas most woodcuts were simple black-and-white pictures, Dürer's had shades of gray. Some of his woodcuts were even printed and sold separately from the books. 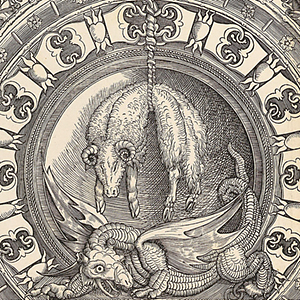 Dürer completed some truly mural-scale woodcut-based art for Holy Roman Emperor Maximilian I. A total of 195 woodcuts pressed onto 36 sheets formed a paper-based triumphal arch that, more lightweight and practical than a stone version, could be displayed in the assorted public halls and palaces of his subjects. Dürer also completed a paper-based triumphal procession that ran to 54 meters (177 feet). In both cases, the woodcuts were likely collaborative efforts with Dürer's students completing much of the work. Freed from the constraints of gravity and practical architecture, the artists could illustrate whatever fantastic creatures they wanted.

Traveling with Nuremberg merchants, Dürer made two trips to Italy, where he may have met Leonardo da Vinci. In fact, he has been regarded by some art historians as the north-of-the-Alps equivalent of Leonardo or Michelangelo but, unlike those Italian painters, had no fellow countrymen who could begin to approach his work.

After completing an artistic apprenticeship and traveling for a few years, Dürer returned to his hometown to marry a young woman, Agnes Frey, from a family of successful merchants. Dürer's father probably arranged the marriage while the young man was traveling, and some events hint at little marital affection. Weeks after the wedding, when the plague broke out in Nuremberg, Dürer left — and left his new wife behind in the sickening city, where the outbreak killed perhaps a third of the population. He occasionally wrote about her in disparaging terms to his friends. Although Dürer's own mother bore 18 children (only three of whom survived), Albrecht and Agnes had no children. On the other hand, Dürer and Agnes worked together in his workshop, and he did bring her along on later trips. He also used her as a model in a painting of Saint Anne. When he died, he left her a fortune.

Many of Dürer's works were religiously themed, not surprising, given the age. Religion permeated most aspects of European life, and Dürer happened to live at time of tremendous upheaval, especially in Germany. The same sort of religious apprehension that surrounded the Y2K mania of the year 2000 permeated Europe around the year 1500. Later on, he was a supporter of Martin Luther and religious reform, but the Peasants' War — a conflict perhaps inspired by Lutheran rhetoric, though relating to other matters — peaked in 1525. Put off by the violence, and perhaps horrified by the widespread destruction of religious art, or "idols," Dürer toned down his support. Even so, two of his students and one of his employees faced arrest or prosecution resulting from religious tensions.

Besides biblical figures, Dürer liked to paint exotic animals. He included a monkey in an engraving of the Virgin Mary, and an elk in a picture of Adam and Eve. He also produced spectacular pictures of natural subjects: irises, storks, parrots, lions, baboons, stag beetles, lobsters, dolphins and crabs. (Shown above are a hare and a detail of a blue roller wing.) A watercolor he made of a small piece of turf sporting several plants became known as one of the most accurate depictions of the natural world that an artist had ever produced. 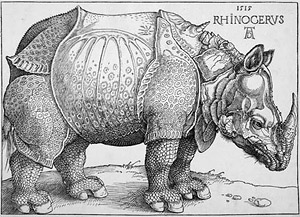 From The Pope's Elephant by Silvio Bedini

Dürer loved to depict the unusual, and one of his best-known pictures, published in leaflet form in 1515, was of a rhinoceros. Dürer based his woodcut on a sketch by a German merchant who spotted the creature is Lisbon. Dürer added fanciful details, such as scaly legs and armor. His version dominated the science world's beliefs about rhinos for over two centuries, despite opportunities to produce more accurate depictions. Several thousand copies of the woodcut sold during Dürer's lifetime. Millions of copies have been circulated since. Having learned from his experience working for his godfather, Dürer shrewdly recognized the growing market for these pictures. He realized that if he could sell enough prints, he could support himself without the need for patronage, the usual bread and butter of Renaissance artists. He was among the first artists to sign and date his prints.

Dürer also devoted considerable attention to the human body. He produced Four Books on Human Proportion which delineated the "proper" proportions of 13 types of male, and 13 types of female figures. In his theory of proportion, he observed:

Life in nature makes us recognize the truth of these things, so look at it diligently, follow it, and do not turn away from nature to your own good thoughts. . . . For, verily, art is embedded in nature; whoever can draw her out, has her.

His interest in the human body hardly ended there. Historians have speculated that a series of engravings he produced were intended to illustrate the four humors, driven by blood, phlegm, and black and yellow bile. Adam and Eve were sanguine. Saint Jerome was phlegmatic. The knight in "Knight, Death and the Devil," was choleric. And the picture "Melancholia" speaks for itself. It is one of his most puzzled-over works.

In his later years, Dürer may have been well acquainted with melancholy. He had been handsome, and probably well aware of it, throughout his youth. But on a long trip to the Netherlands, he went on a brief voyage in brackish waters to observe a whale. He might have contracted chronic malaria on the outing, and for years afterwards suffered from fevers, headaches, nausea and fainting. He never really recovered. When he died in 1528, a friend described him as "withered as a bundle of straw."

Before and after his death, Dürer's work was admired almost too well. Decades after his death, artists began copying his work, and dealers often sold the copies by passing them off as Dürer's own. Art historians have consequently had a difficult time identifying his works with certainty.