Born in 1840 to Quaker parents, Edward Drinker Cope developed an oddly fiery temperament. To keep him out of the Civil War, Cope's father sent him to study in Europe, but Cope spent most of his life in a protracted battle anyway — with his archrival O.C. Marsh. 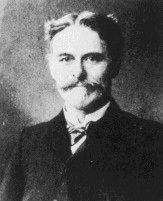 Cope and Marsh started out as friends, meeting in Europe and hunting fossils together in the eastern United States. But when he visited one of Cope's digs in New Jersey, Marsh covertly paid Cope's crew to send future finds to him (Marsh). The already strained relationship turned truly ugly when Marsh claimed to have pointed out (accurately) that Cope had mounted the skull of a plesiosaur, Elasmosaurus, on the tip of its tail, not its neck. (By some accounts, it was actually Cope's mentor Joseph Leidy who pointed out the mistake.) Cope was so mortified at his mistake that he tried to buy up and replace all the printed copies of the publication in which the fossil was described, but Marsh wouldn't let this mistake die (nor would he relinquish his own copy of the erroneous paper). To make matters worse, the corrected publication did not bear a later date, perhaps giving some the impression that Cope was trying to hide — rather than correct — his mistake.

Marsh had a rich uncle, and Cope had a rich daddy, so both men had the resources, at least for a time, to annoy each other. What followed were about 30 years of the Great Bone Wars.

When Cope and Marsh began their research in paleontology, only 18 dinosaur species were known to North America. Between the two of them, these men named more than 130 new dinosaur species. Among the valid identifications, unfortunately, were plenty of misinterpretations and multiple names for the same species. The men didn't consult each other, so this was to be expected. While they named new species, Cope and Marsh unwittingly traded field assistants; seeking better conditions, higher pay or more recognition, the fossil diggers they employed switched allegiances fairly frequently.

In his attempts to get the better of Marsh, Cope made himself one of the most productive fossil hunters in history, naming more than 1,200 vertebrate species and publishing more than 1,400 papers. In 1877, he bought The American Naturalist journal, in order to better disseminate his work, spending most of his inheritance on the purchase. He also founded his own scientific rule. Today, paleontologists commonly refer to the tendency of animal and plant lineages to get bigger over time as "Cope's rule" because he established the principle in the 19th century. Initially accepted, the idea came under criticism in the 1970s, and evolutionary biologist Stephen Jay Gould later described the rule as a "psychological artifact." More recent studies, however, have suggested that the rule has validity. Cope also argued that highly specialized organisms can't adapt as easily to changing conditions — an idea that has aged pretty well.

Although he accepted evolution, Cope didn't really accept Darwinian evolution. Less than a decade after Charles Darwin published On the Origin of Species, Cope published a paper entitled "On the Origin of Genera." Biologist and science historian J. David Archibald views Cope's approach from a modern perspective:

Cope argued that genera, families, and other groups arose more through the retardation and acceleration in the process of development of an individual and that natural selection was subservient to this process. Whereas Cope's intuition about developmental timing would fit in today's understanding of its importance in the evolutionary process, his views on how this would affect higher categorical levels — genera, families, and so on — were completely misguided. Although not universal, the consensus is that evolution operates at and below the species.

Determined to make a lasting mark, Cope even willed his own body to science, but when his bones were delivered, they were badly decalcified and shelved. His skeleton eventually wound up in the Wistar Institute in Philadelphia where it was retrieved by Louie Psihoyos (a National Geographic photographer researching a dinosaur book) and eventually relayed to paleontologist Bob Bakker. In 1993, Bakker wrote a description of Cope as the type specimen — the example by which the species is measured — for Homo sapiens. (Cope's brain remains in the Wistar Institute, near that of another great 19th-century paleontologist: Joseph Leidy.)

Fanatical commitment to science aside, Cope often engaged in behavior that, by today's standards of science, qualify as criminal. When he'd finished excavating a particular site, he would order his assistants to dynamite it, rendering it useless for any other fossil digger. Yet his own unscrupulousness didn't prevent him from seeing himself as a victim. Among the species he named was a marsupial mammal he dubbed Anisonchus cophater, or "jagged-toothed Cope hater."

On its trips with Psihoyos, Cope's skull (like most) appeared to be grinning, but his life was not always a happy one. Beyond his consuming feud with Marsh, he had trouble with others as well: conflicts with administrators at Haverford College, and arguments with council members of the Philadelphia Academy of Natural Sciences from which he eventually resigned or was possibly forced to leave. He eventually separated from his wife and child. Perhaps trying to ease the blow, his wife said it was just too hard to live with a genius. Marsh persuaded officials to audit Cope's fossil collection, and the audit forced him to return fossils collected with government support. Besides government funds, Cope had spent large sums of his own money collecting those fossils, and having to return them left him livid.

After Marsh cut him off from government funding, Cope tried to offset the loss with a bold gamble on a New Mexico silver mining venture. It failed. Financially ruined in his later years, he had to sell his house and move in with his museum collections. Cope spent his final days on a cot surrounded by piles of bones. That time was briefly brightened by a visit from his protégé — who had by then become quite powerful — Henry Fairfield Osborn. Osborn brought with him the very promising young artist Charles R. Knight, whom Cope mentored for a short while. Though nine years younger than his nemesis, Cope died first — in 1897 at the age of just 56.