From The Science of Describing by Brian W. Ogilvie

Rather late in his illustrious career, Carolus Clusius (also known as Charles de l'Écluse) made a horrifying discovery: In his correspondence, he had repeatedly addressed the Count of Arembergh as a mere count when, in fact, the count was a prince in his own right. Clusius had long followed a convention of using carefully chosen epithets to honor his acquaintances, and in this case, he had chosen sloppily. Whether the Count of Arembergh minded nearly as much as Clusius is not known, but Clusius's horror says something about the times. In theory, anyone with knowledge and a love of nature could contribute to Renaissance knowledge. In practice, distinctions mattered. Apothecaries and "wise women" certainly weren't taken as seriously as men like Clusius, who had studied law at Wittenberg and medicine at Montpellier. (His own landlady addressed him as "der herr" in recognition of his noble title.) He eventually served the Holy Roman Emperor Maximilian II as a gardener, though this gardener insisted on being called a courtier to distinguish himself from a common laborer who would dirty his hands.

Although fussy about social distinctions, he was less strident about religious ones. Clusius was born a little south of Antwerp in 1526, to a well-off, well-educated, Catholic family that had strong ties to Abbey of Saint-Vaast. Yet as a young man, he attended Lutheran university without causing a stir. Some historians have credited his exposure to Lutheranism for his interest in nature, but whether that was actually the case is far from certain. In general, he worked well with followers of different religions and tried to avoid public declarations of faith.

When Clusius was born in 1526, gardens had changed little since the eighth century. Clusius played a significant role in fixing that. In his twenties, he assisted the natural historian Guillaume Rondelet, putting together a famous book on fishes. In 1573, Clusius left Northern Europe to set up the imperial medicinal garden in Vienna. For 16 years, he oversaw that garden, and started experimenting with growing exotic flowers from Central Asia: tulips. With Clusius's help, tulips became the horticultural then financial rage throughout Europe, and especially in the Netherlands. In 17th-century Europe, highly prized tulips often bore streaks of different colors, adding to the tulip's exotic esteem. Clusius was among the first to realize the streaks were a bad sign and the tulips wouldn't live much longer. As many later horticulturalists came to understand, the streaks resulted from disease. 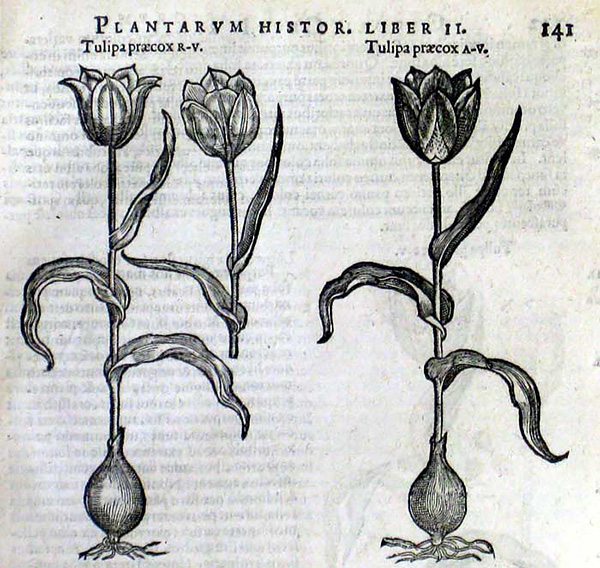 A pair of tulips from Clusius's Rariorum plantarum historia, available from Botany at the Edward Worth Library

With Maximilian II's death, however, Clusius's luck changed. Maximilian's successor, Rudolf II was arguably as devoted to knowledge and nature as his predecessor, but he wasn't as devoted to the garden in Vienna. He razed it and set up a new one (in Prague) without Clusius's help. Clusius stayed on in Vienna for a while, remaining in the service of the Hapsburg court and maintaining his own garden, then became a professor of botany at the University of Leiden, where he set up a new botanical garden at the ripe old age of 67. It was a shrewd choice of location; Leiden's proximity to Dutch ports meant he could observe exotic cargo collected by the Dutch East India Company.

From The Naming of Names by Anna Pavord

While serving in these various posts, Clusius traveled widely, adding some 200 new plants from Spain and Portugal to the several hundred he described in his lifetime. He was able to read Flemish, French, German, Greek, Italian, Spanish and, of course, Latin. He taught himself Portuguese to translate into Latin the account of Garcia de Orta's travels to Goa. When Clusius himself grew too old to travel well, he relied on specimens that others sent, or on the descriptions they relayed. This was tricky business, he knew, and it sometimes led to misidentifications, such as the time he identified four different species of blowfish from four different (and rather poorly preserved) specimens of the same species. On the other hand, he placed appropriate trust in a description he received of Ficus indica, recognizable today as a Banyan tree.

When overseeing his own publications, Clusius left little to chance, watching over the shoulders of his illustrators and looking for those skilled at making woodcuts. And unlike some of his predecessors, Clusius was willing to write about plants without any discernible human use, including the ugly and the stinky. Perhaps the first European work to describe a regional mushroom "flora" was one of his. Among Clusius's publications in his long, productive life were Codex Fungorum, Exoticorum libri decem, Historia fungorum, Libri Picturati, Rariorum per Hispanium stirpium historia, Rariorum per Pannoias stirpium historia and Rariorum plantarum historia.

Narrative text and graphic design © by Michon Scott - Updated May 1, 2022