William Buckland may not be a household name, but to dinosaur lovers the world over, he should be. Professor of Geology at Oxford, Buckland is responsible for the world's first description of a recognized dinosaur fossil, although the term "dinosaur" didn't exist at the time. In 1824, Buckland published Notice on the Megalosaurus or Great Fossil Lizard of Stonesfield.

Buckland's publication lagged several years behind his realization that he actually had ancient reptilian fossils on his hands, something he probably understood by 1818 after acquiring multiple fossils of the species. The type specimen for Megalosaurus, a partial jaw with a jutting tooth, was collected in 1797 by a friend of Buckland's, Sir Christopher Pegge. A saurian sacrum reached Buckland probably by the mid-1810s.

From Dinosaurs Past and Present: Volume II by Paul, Horner, Padian, Czerkas, Currie and Rigby

In the same science meeting where he described Megalosaurus Buckland also announced — reassured by Cuvier that he was correct — the first fossil mammal from the Age of Reptiles. In its own way, this tiny mammal fossil was as surprising as the giant reptile he had just named. Conventional wisdom of the time said mammals came only after the great reptiles.

Buckland was born just several miles away from the fossil-rich Dorset and East Devon Coast, now a UNESCO World Heritage site. The son of an Anglican parson, Buckland fell in love with paleontology in his youth, and got ordained in order to qualify for a fellowship at Oxford. So long as he remained unmarried (a lifestyle he eventually quit after he found a sweetheart happy to do fieldwork with him), he enjoyed a modest income, and he practiced his science when new discoveries were being made at a breathtaking pace. His own discoveries in paleontology were as varied as they were distinguished. In 1822, in An Assemblage of Fossil Teeth and Bones, he described a feeding frenzy of ancient hyenas based on fossil remains at Kirkdale Cave. He cited the small cave as an example of a habitat that existed immediately before the biblical flood. That same year he discovered an ancient human skeleton. He initially and correctly identified it as male, but later reversed the decision and proclaimed the skeleton not only female but also (perhaps in jest) a witch! After calling it the Red Witch, he finally gave the skeleton the more palatable name of the Red Lady of Paviland.

Unlike the scriptural geologists of his day, Buckland did not hold to a literal interpretation of Genesis, especially in terms of geologic time. Though he rejected evolution, he acknowledged that the Earth supported life long before the existence of humans. He was in fact a deeply religious man who devoted much of his life to reconciling scripture and geology. One example of that effort was his two-volume work, Geology and Minerology, part of The Bridgewater Treatises on the Power, Wisdom and Goodness of God as Manifested in Creation. Published in 1836, Buckland's work examined everything from mineral deposits to fossil plants in an effort to find evidence of an intelligent creator. Though it was hardly rigorous science by today's standards, Buckland made an admirable effort to make the findings of geology palatable to the faithful. And though he wrote much about the benefits of creation to mankind, Buckland didn't assume the universe existed just for us.

I would . . . be unwilling to press the theory of relation to the human race, so far as to contend that all the great geological phenomena we have been considering were conducted solely and exclusively with a view to the benefit of man. We may rather count the advantages he derives from them as incidental and residuary consequences; which, although they may not have formed the exclusive object of creation, were all foreseen and comprehended in the plans of the Great Architect of that Globe, which, in his appointed time, was destined to become the scene of human habitation.

To make geology more accessible to a general audience, Buckland used color-coded diagrams relating rock strata to the kinds of fossils found in them. 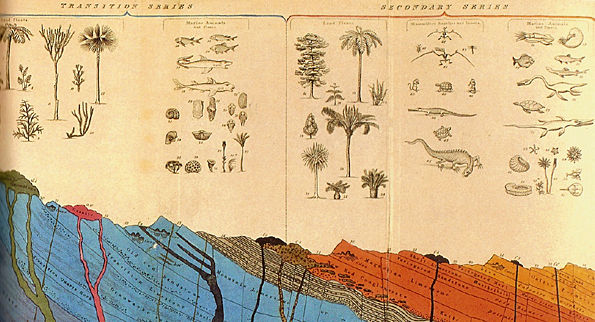 From The Great Naturalists edited by Robert Huxley

Throughout his life, Buckland kept an open mind; persuaded by Louis Agassiz and his own observations, he eventually traded his belief in the diluvial theory for support of the Ice Age theory. Samuel Woodward, a fellow attendee at an 1840 Geological Society of London meeting, recounted Buckland's admission that he had set out from Neufchatel to ridicule Agassiz's theory but instead "returned converted."

When it comes to an open mind, in fact Buckland might have had a mind so open his brains sometimes fell out. To satisfy their curiosity about the taste of nature, he and his son Frank sampled just about every animal they could: earwigs, slugs, even mice on toast. A Bedside Nature recounts that William Buckland thought mole was the most disgusting food he ever ate, "until he tried stewed bluebottles." According to Atlas Obscura, the Bucklands even served dinner guests hedgehogs and puppies, which, if accurate, is kind of unforgivable. 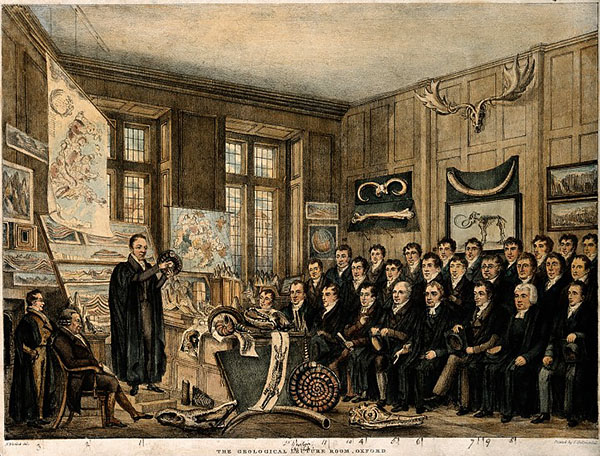 And Buckland was a fantastic popularizer of science. One method of adding to its popularity was by being generous with alcohol when hosting guests. He also gave unforgettable lectures. One of his students recounted how Buckland once

. . . rushed, skull in hand, at the first undergraduate on the front bench — and shouted, "What rules the world?" The youth, terrified, threw himself against the next back seat, and answered not a word. He rushed then on me, pointing the hyena full in my face — "What rules the world?" "Haven't an idea," I answered. "The stomach, sir," he cried.

Buckland wasn't just engaging in clownishness for his own entertainment. Nobody at Oxford was required to study natural science, so if he didn't make his lectures fun, few students would show up. All the same, a friend recounted that addressing a large audience made Buckland nervous — until he made the audience laugh. He achieved that goal in one lecture by happily strutting about the room, imitating the gait of giant birds he believed left their footprints in ancient deposits. (The "birds" could well have been bipedal dinosaurs.) Afterwards, one of Buckland's colleagues scoffed, "the grossness of the Buffoonery acted on me like an emetic." The colleague must have been especially shocked when Buckland pioneered the field of coprology (the study of fossil poo).

Like many other types of fossils, coprolites had been discovered, and often misidentified, for centuries. At Kirkdale Cave — a particularly rich assortment of animal remains — Buckland discovered white spheres that looked suspiciously like dog doo-doo whose scooping is long overdue. Gifted with a sense of adventure, he began investigating. He took a pet hyena, let it chomp down hapless guinea pigs, then studied what the hyena threw up or pooped. All inside his house, apparently. (Mrs. Buckland must have had the patience of a saint.) Not surprisingly, the tokens of hyena esteem left in the cave contained bone fragments of the poor creatures the hyenas had munched, just as he confirmed. Buckland's fascination with the topic didn't end there. When he later came across corkscrew-shaped coprolites that vaguely traced the same paths as some fish intestines, he dissected extant fish and injected their intestines with quick-drying cement. The experiment confirmed his hypothesis about convoluted coprolites.

It would be fitting for the discoverer of dinosaurs to have a happy ending, but Buckland's final years were pretty rough. Buckland was affluent enough to be considered an eccentric rather than a lunatic, but his eccentricities deepened in the 1840s, and his family eventually realized he had dementia, despite some occasional periods of lucidity. After William's death, his son Frank ordered an autopsy. The autopsy found advanced decay in Buckland's top three vertebrae, and at the base of his skull. The explanation for both the decay and dementia might be tuberculosis.