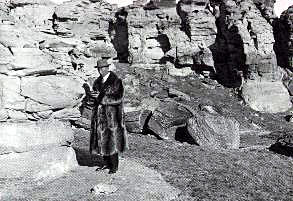 Born in 1873 to a hard-working farming family, Barnum Brown had to wait several days for a name while his parents and siblings quibbled over what to call him. Consumed with excitement over the traveling circus show, his older brother suggested naming the baby boy after the illustrious P.T. Barnum. The decision proved prophetic. Brown enjoyed a spectacularly successful 66-year career in paleontology, including his post as curator for the American Museum of Natural History, where he was largely responsible for the museum's multi-ton collection of dinosaur fossils.

Brown's parents wanted to give their son a good education, and they sent him to high school (not available everywhere) in the nearby town of Carbondale, Kansas. After high school, he attended Kansas University and in 1894, he began hunting fossils under the direction of paleontologist Samuel Wendell Williston. The following year, he worked with Williston again, to retrieve a Triceratops skull from Wyoming. Williston wrote of Brown:

Brown has been with me on two expeditions, and is the best man in the field that I ever had. He is very energetic, has great powers of endurance, walking thirty miles a day without fatigue, is very methodical in all his habits, and thoroughly honest. He has good ability as a student also and has been a student with me in anatomy, geology and paleontology. He practically relieved me of all care in my last expedition.

A recommendation from Williston secured Brown a spot on a fossil dig operated by the American Museum of Natural History. Fine fieldwork for AMNH later earned Brown a job with the museum, and the eager young man left the University of Kansas even before the current academic term was done. The move was vintage Brown; fieldwork always took precedence. In New York, Henry Fairfield Osborn pulled strings to provide Brown with admission and even a scholarship to Columbia University, but Brown's academic abilities didn't match his skills in the field. He didn't last at Columbia, and took a decade to complete his undergraduate degree from KU. Decades later, he received an honorary doctorate from Lehigh University, finally enjoying the title of "doctor."

In 1897, while working at AMNH, Brown explored Upper Jurassic beds in Wyoming. At first, the quarry looked empty, but he kept looking. The quarry that initially seemed useless eventually yielded 65 tons of fossils. About the same time, Brown and his colleague Henry Fairfield Osborn asked a Wyoming shepherd if he knew of any fossils in the area. He didn't. Then they realized his stone cabin was made of fossils. The whole cabin.

Back in New York in December 1898, Brown walked to work through the snow one morning, probably expecting a day like any other. That evening, he was on a ship bound for Patagonia, where he spent roughly 18 months digging fossils and braving blizzards. A few years later, he was again unearthing bones in the western United States.

Quarry No. 1 contains the femur, pubes, humerus, three vertebrae and two undetermined bones of a large Carnivorous Dinosaur not described by Marsh. . . . I have never seen anything like it from the Cretaceous. These bones are imbedded in flint-like sandstone concretions and require a great deal of labor to extract.

So wrote Brown from Hell Creek, Montana, with an apparent gift for understatement. The "large Carnivorous Dinosaur" was Tyrannosaurus rex, "King of the tyrant lizards." He discovered the first skeleton in 1902, and found a better-preserved skeleton, one that truly gave a sense of the extinct animal's enormity, in 1908. Putting the "king" in perspective, paleontologists point out that T. rex was not the sole carnivorous dinosaur of its time, nor even the biggest. But it remains probably the most famous.

Both T. rex skeletons were put on display at AMNH. During World War II, Americans feared that the Germans might bomb New York and the T. rex fossil might be lost (not a misplaced fear — many fossils in European museums were blown to bits in the 1940s). The skeleton Brown discovered in 1902 was shipped to the Carnegie Museum in Pittsburgh.

Since Brown's day, dozens more T. rex specimens been found in North America, though many of them have been fragmentary. (A multitude of T. rex teeth have turned up because these dinosaurs, like sharks, could grow new teeth throughout their lives.) Estimating the total number of T. rex dinosaurs that ever walked the Earth is challenging. Most plants and animals don't fossilize, and fossilization depends on the right combination of events to preserve anything, such as rapid burial before the remains are completely scavenged. One way to estimate T. rex population size is to extrapolate from modern species populations. Based on modern species, it's possible to surmise several things. As a vertebrate, T. rex would be much rarer than an invertebrate, and as a carnivore, T. rex would be rarer than an herbivore. As a big animal, T. rex would have been rarer than a little animal since body size and population size tend to have an inverse relationship. A 2021 study by scientists with the University of California, Berkeley, and the San Diego Natural History Museum examined body mass and population density in living species to estimate the overall abundance of T. rex individuals. They wrote:

We estimate that its abundance at any one time was ~20,000 individuals, that it persisted for ~127,000 generations, and that the total number of T. rex that ever lived was ~2.5 billion individuals . . . The uncertainties in these values span more than two orders of magnitude, largely because of the variance in the density–body mass relationship. 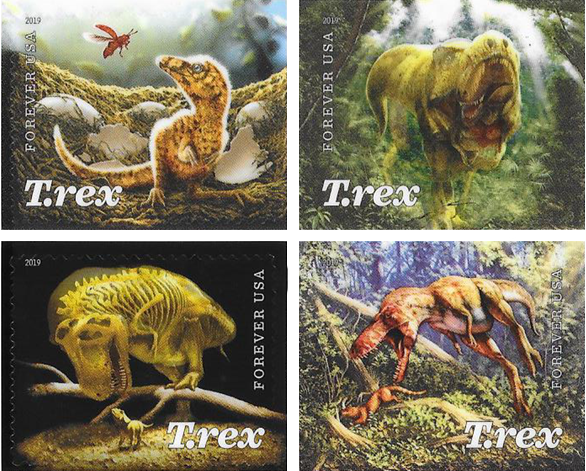 Several years after the initial T. rex discovery, while Barnum Brown was still basking in the glow of accomplishment, tragedy struck. His wife Marion — arguably the love of Brown's life — contracted scarlet fever and died. Their baby daughter Frances contracted the illness at the same time, and managed to survive, but the distraught Brown wasn't up to being a single dad. Following common convention of the time, he turned over his toddler daughter to her mother's parents. They wanted to raise the little girl, and Barnum wanted to bury himself in his work. The iconic photograph of Brown in a natty suit and beaverskin coat might suggest a carefree bachelor, but in reality, it shows a widower. Devoted as he had been to his first wife, however, Brown retained an eye for the ladies. Rumors flew for years about his various exploits, but he was discreet, and few rumors were ever confirmed.

Frances didn't see her father much growing up, in particular during a five-year stretch when he was overseas, working in far-flung locales like Samos, Pakistan, India, Burma and Abyssinia. In the years before air travel, quick visits home were unrealistic. Brown's colleagues at AMNH would hear nothing from him for months, but his long absences were punctuated by the delivery of (literal) tons of fossils. In fact, such gargantuan deliveries sometimes served as the only evidence that the fossil hunter was still alive. Friends and family members in the states had reason to worry. In Mandalay, Brown nearly died of malaria, and he was nursed back from the brink by something else he collected: his second wife, Lilian. Fourteen years Brown's junior, flirtatious Lilian tolerated his occasional dalliances, in part because she indulged in one or two of her own.

Brown's extensive overseas fieldwork proved useful in a surprising way years later. During World War II, after he had been required (over his objections) to retire from AMNH, Brown went to work for the war effort in Washington, D.C., providing intelligence on various localities of interest to the U.S. military. His daughter Frances was working in Washington at the same time, so father and daughter lived under the same roof for the first time since she had been tiny. Aside from Frances's fears that her dad was smitten with a Nazi spy, the living arrangement went smoothly.

The Great Depression hurt museum budgets as much as anything else, and to keep excavating, Brown had to be creative. On one trip to the field, he and his wife dropped by the Chicago World's Fair, taking in "The World a Million Years Ago." Never mind that the exhibit put prehistoric humans together with dinosaurs that didn't walk the Earth at the same time, it was a fun show. And it was funded by Sinclair Oil. He eventually made a deal with the Sinclair Oil Company: He reviewed dinosaur booklets for them and they paid for his expeditions. So the gas stations with the Diplodocus logo attracted even more customers by giving them the booklets in the 1930s and 1940s. Brown also provided input for the dinosaur sequence in Fantasia and delivered entertaining lectures on a weekly CBS radio show.

It was also during the Great Depression that Brown took on an assistant: Roland Bird. An excellent fossil hunter in his own right, Bird found some of North America's best dinosaur trackways, including extensive track systems near the Purgatoire River in southeastern Colorado, and the Paluxy River limestone beds near Glen Rose, Texas.

Before his career was over, Brown managed to make a remarkable contribution to the field of anthropology, but only after marginal involvement with a gaffe. In the early 1920s, Brown's mentor Osborn was excited by the find of a tooth in Nebraska, later dubbed Hesperopithecus and nicknamed Nebraska Man. The tooth looked like it might belong to a primate. Brown evidently accepted this interpretation at the beginning, but doubts began to gnaw at him. He confided to a colleague that the primate might just as easily be a peccary, which ultimately proved to be the case. But in 1927, Brown reported more welcome news when he confirmed the identification, by Jesse Dade Figgins, of a prehistoric spear point in Folsom, New Mexico. The Folsom point provided evidence that humans were in North America at the end of the Pleistocene Ice Age, and they were hunting big game.

After he retired from AMNH in 1942, Brown continued to lead tours there, often describing the dinosaur fossils he had collected as his "children." One of his last assignments was to supervise the construction of Sinclair's life-sized dinosaur models for the 1964 World's Fair. Brown completed his task, but didn't live long enough to see the dinosaurs' trip to the fair. About a year after he died, the lovable giants rode on a barge from their construction site in the town of Hudson, floating down the Hudson River. Brown, who had died in February 1963, just a week shy of his 90th birthday, never got to see the looks on Manhattanites' faces.