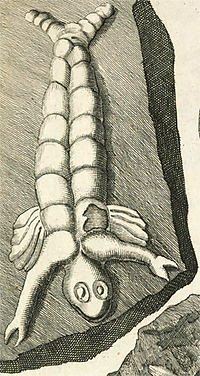 From A Heavy Hoax: The "Lying Stones" of Johann Beringer

In 1694, Johann Bartholomew Adam Beringer earned his doctorate in medicine from the University of Würzburg. One year later, he was named professor at the same university. That kind of early-in-life success often breeds envy, and nowadays Beringer is mostly remembered as the butt of a particularly cruel joke. In the 1930s, science historian Frank Dawson Adams recounted:

Beringer was keenly interested in collecting the fossils which abounded in the Muschelkalk about Würzburg. Some sons of Belial [evil spawn] among his students prepared a number of artificial fossils by moulding forms of various living or imaginary things in clay which was then baked hard and scattered in fragments about on the hillsides where Beringer was wont to search for fossils. . . . As certain persons had ventured to assert that these fossils had been made artificially, [Beringer] devotes a chapter of [his] treatise to refuting such statements. The distressing climax was reached, however, when later he one day found a fragment bearing his own name upon it. So great was his chagrin and mortification in discovering that he had been made the subject of a cruel and silly hoax, that he endeavored to buy up the whole edition of his work. In doing so he impoverished himself and it is said shortened his days.

The popular account that Adams relayed has proven wrong on a few points. For one, Beringer apparently survived the prank a good long time, without any crushing financial ruin. For another, two of the three fossil-digging boys who collected specimens for Beringer's cabinet were likely as deceived as the professor. Finally, there probably wasn't a rock with Beringer's own name on it, although some rocks did bear written characters.

Old court documents from the Würzburg State Archives have revealed a more accurate picture of what occurred. In fact, the perpetrators were really Beringer's colleages: J. Ignatz Roderick (another professor at the university) and Georg von Eckhart (a university librarian). The two might have been helped by an affluent German nobleman as well. Fuming over Beringer's habitual arrogance, the perpetrators carved stones — of lizards, frogs, spiders on their webs, even the Hebrew name of God — and planted them in an area that interested Beringer. Diggers employed by Beringer turned up the finds. As the Geological Society of London recounts, "The joke could have been lost to posterity had he not published an academic treatise on them — Lithographiae Wirceburgensis in 1726." When it was later discovered that the carvings were a hoax, Beringer requested a special hearing to look into the matter, by some accounts because the perpetrators subsequently accused him of committing the fraud.

To his credit, Beringer knew his find was important, but avoided naming the cause, leaving that for better minds than his own. In his day, no one really understood how fossils formed. Beringer considered all the logical possibilities: they were sports of nature formed by the "plastic power" of the Earth, they grew in place from seeds and eggs trapped in rock, they were the remains of biblical flood victims. Beringer even considered the possibility that they were the carvings of prehistoric pagans, but he had to rule out this possibility since pagans wouldn't know the name of God.

Beringer's entertainment value persists through the ages. On April 1, 2017, the Geological Society of London opened an exhibition about him: The Lying Stones of Johann Beringer. And in one small way, Beringer has been vindicated. Spiders and their silk have occasionally been preserved as fossils — in amber.