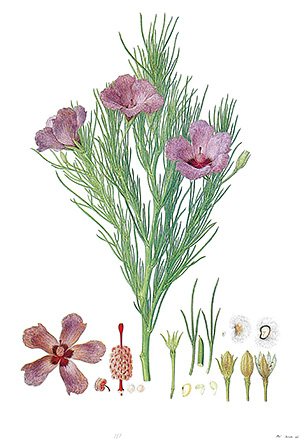 Bauer's painting of Alyogyne hakeifolia, based on his earlier sketch and material collected in South Australia. From Wikimedia Commons.

When the Royal Navy officer Matthew Flinders sailed the Investigator to Australia at the turn of the 19th century, he took with him not only 80 sailors, but also a civilian staff of naturalists and artists. Among them was the remarkably talented illustrator, Ferdinand Bauer.

Born in Feldsberg (today Valtice), Bauer worked for a time with his elder brothers on a 14-volume florilegium. He also worked as a botanical illustrator at the University of Vienna where he met John Sibthorpe, a botany professor at Oxford. Sibthorpe invited Bauer on a botanizing trip to Greece where he remained for 18 months illustrating Mediterranean plants. Sibthorpe treated Bauer a little too much like a servant for Bauer's tastes, and when the botany professor took a second Mediterranean trip, Bauer decided not to join him. Bauer settled in England where he converted his sketches (more than 1,500) to paintings. These paintings posthumously won Bauer the praise of 19th-century botanist Joseph Hooker, as "the greatest botanical work that has ever appeared." Fortunately, Joseph Banks appreciated Bauer's work while he was still alive, and recommended him for the Investigator voyage. In a way, Bauer was tremendously lucky; in another way, he was not. Sea voyages were risky business when storms or sickness could strike at any time, or when, as was the case with France and England, you might very well run into nice people who were, regrettably, on the other side of a war. Exploring new territory was equally risky when you didn't know what tasty looking plants might make you violently ill, as Bauer discovered after eating the nut of a cycad tree (twice).

Added to the usual perils of long sea voyages, the Investigator seemed particularly plagued. The ship eventually needed so many repairs that Flinders decided to return to England for a replacement ship. In his attempt to do this, he discovered the unwelcome news that France and England were once again at war; after a stop at the wrong port, he spent six and a half years cooling his heels in a provincial French prison.

Bauer, meanwhile was still in Australia, taking side trips around New South Wales and Norfolk Island. Remarkably, the Investigator was still limping along, and Bauer made a long journey to Norfolk Island where the ship was to pick him up. He expected to be retrieved in a few weeks. Instead, he waited eight months. The long stay, however, provided a benefit: It enabled Bauer to observe and illustrate plant life cycles that he wouldn't have seen in a shorter period, and his illustrations were the basis for a later book. When the Investigator finally fetched him, he took along his collected plants, his paintings and a live wombat, pictured on this page.

Despite the months he spent waiting to be retrieved, Bauer worked in a fashion that enabled him to make the best use of a short time in the field (or the botanical garden). Rather than paint completed pictures, he would produce sketches with notes about colors to be filled in later — using four-digit codes relating to a color chart. Diligent art-history research in the 20th century turned up what may have been Bauer's color chart, and it proved to be a compact 118x118-millimeter square of paper.

In the early 21st century, modern researchers marveled at Bauer's color memory, likening his ability to remember precise hues and shades with how some musicians remember notes. His amazing memory may have distinguished between as many as 1,000 different colors. No wonder his paint-by-number system worked so well.

When the voyage ended and Bauer returned to England, he had trouble finding an assistant to engrave and color his illustrations, forcing him to do the work himself. Even worse, there was little market for Bauer's work when it was done. Disillusioned, he eventually returned to Austria, and much of the recognition he deserved didn't come until after his death.