When the young Alfred Russel Wallace first dabbled in science, he studied botany. Then he beheld the beetle collection of his young friend, Henry Walter Bates. Varied, puzzling, some of them gleaming like jewels, the beetles drew Wallace toward insects. When he subsequently dreamed of journeying to the Amazon, Bates encouraged him. Bates had only a little more formal education than Wallace; neither man had very much schooling. Both had a sense of adventure. Bates joined Wallace on the expedition in 1848, much to the regret of his parents who felt he'd make a better living in manufacturing than in collecting exotic specimens. Bates guessed (correctly) that his parents were wrong.

Bates and Wallace soon fell into a routine in their field work in Brazil, rising at dawn, looking for birds, breakfasting at midmorning, then turning to insects until stopped by midday heat. They often spent the evenings preparing and mounting their specimens. Far away from the stratified Victorian society of England, the lowborn Bates was able to make a decent living doing what he liked.

Although Bates and Wallace remained good friends throughout their lives, they had different dispositions. Whereas Wallace was intellectually driven and socially reserved, Bates was more relaxed, willing to absorb knowledge gradually (and also more willing than his buddy to admire the feminine beauties of the Amazon). Perhaps due to differences in temperament, but more likely to cover a greater area, Bates and Wallace soon split up and began exploring different regions. Although Wallace returned to England after four years in South America, Bates stayed on for 11 years, and his contributions to biology were significant. He collected nearly 15,000 species, about 8,000 of which were new to science. Among his many achievements was confirming the disturbing observation, originally made about 150 years earlier by Maria Sibylla Merian, that really big spiders will kill and eat little birds. 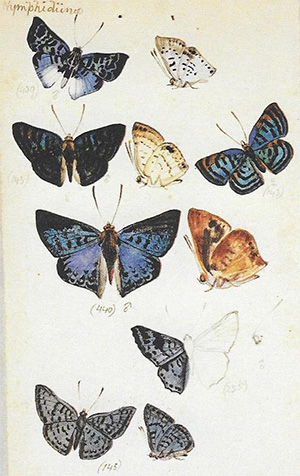 From Explorers' Sketchbooks by Huw Lewis-Jones and Kari Herbert

Prolonged exposure to sun, heat and tropical disease eventually took its toll, and Bates was obliged to return to England. He didn't exactly look forward to it. As he waited to board a ship home, he later recalled,

Recollections of English climate, scenery, and modes of life came to me with a vividness I had never before experienced during the 11 years of my absence. Pictures of startling clearness rose up of the gloomy winters, the long grey twilights, murky atmosphere, elongated shadows, chilly springs, and sloppy summers.

Lacking the financial resources of a gentleman like Charles Darwin, Bates had to return to the family business of hosiery manufacturing to pay the bills. Within the first few years of his return to England, though, he published a ground-breaking scientific paper on what became known as Batesian mimicry. Birds, he found, find certain butterflies tasty and other butterflies disagreeable if not dangerous to eat. After one or two scary experiences in bad butterfly cuisine, birds learn to avoid similar looking bugs. However, some palatable butterflies bear a remarkable resemblance to butterflies that the birds have learned to avoid. These mimics escape the birds' culinary interest by imitating distasteful prey. Bates's insight was warmly welcomed by Darwin, but Darwin still had relatively few sympathizers in British academia, so Bates's paper didn't get him a job. The book he published in 1863 about his travels, The Naturalist on the River Amazons, received a much better reception. The highest praise he could have hoped for came from Darwin, who called the book "the best book of Natural History Travels ever published in England."

Bates eventually found work as an assistant secretary of the Royal Geographical Society where he edited the society's Transactions and organized expeditions. This paid the bills handsomely, but Bates was able to make little use of his skills as a natural historian. In 1881, however, he was elected a Fellow of the Royal Society.

Some 150 years after Bates discovered mimicry, biologists still debate its finer points. Careful observation over the decades has revealed that mimics are often imprecise, raising the question of why there is so much variation. After all, natural selection should favor very accurate mimicry, to maximize the tasty mimic's chances of looking like a bug a bird shouldn't eat. As of early 2012, the matter wasn't settled, but new research supported a couple hypotheses. One hypothesis is based on the understanding that evolution need not be perfect, only good enough to do the job. A mimic that looks close enough to what it imitates to escape the beaks of most birds can pass along its genes to the next generation. Another hypothesis relates to constraints. Mimics might not have all the right genes to perfectly resemble the right bugs. Or there may be an evolutionary tradeoff in place, where the ability to perfectly mimic the right bug is offset by other selection factors. Whatever the case, biologists continue to respect Batesian mimicry as a powerful explanation for lookalike bugs.