John Bartram made a successful living collecting plant specimens from the North American colonies for English patrons. For his son William, born in 1739, he wanted a more practical livelihood. William — in many ways his father's favorite, and the only one among the Bartram children to be sent to an academy — alternately delighted and disappointed his father.

William Bartram showed an early interest in nature and an early talent in drawing. He began accompanying his father on botanizing trips at the age of 12, and spent several years drawing specimens. After his father was appointed official botanist to King George III in 1765, the young William persuaded his father to take him along to Georgia and Florida. The two endured rough conditions, but William loved nature enough to remain in Florida after his father returned home to Philadelphia. For a time, the young man tried to raise indigo and rice but his venture failed and, whether by that or some other bad business venture, found himself chased by creditors. After a brief trip back to Philadelphia, William Bartram headed south again, this time finding his own British patron, John Fothergill.

The American Revolution was approaching as Bartram traveled through the southeastern United States, but he remained strangely detached from the conflict, even though it put his patronage to an end. Bartram's detachment was somewhat understandable considering the wilderness he explored was usually far from the fighting. And he had more immediate concerns: More than once, he nearly lost his life, almost eaten by alligators or poisoned by fever. All the while, many of the animals he was able to illustrate wound up on his own dinner plate as he had little else to eat.

Bartram returned to Philadelphia in 1777, shortly before his father died. Disappointed in William, John Bartram willed the family estate to William's younger brother. William Bartram spent his final years — decades, in fact — at the family estate, wandering through the gardens, and writing memoirs of the expeditions he took when he was a younger man. During these years, he turned down a number of honors offered to him. He was given membership in the American Philosophical Society and the Academy of Natural Sciences but didn't participate in meetings. He accepted a professorship at the Pennsylvania University, but didn't actually teach there. 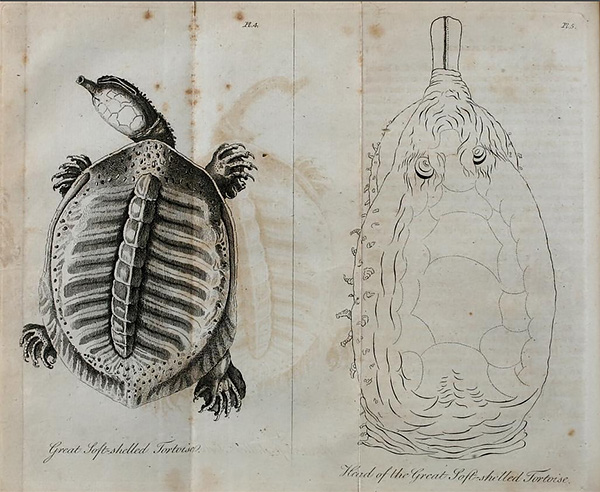 A foldout from Travels through North and South Carolina, Georgia, and East and West Florida by William Bartram, showing a soft-shelled tortoise. Image provided by the Biodiversity Heritage Library.

Bartram's book, Travels through North and South Carolina, Georgia, and East and West Florida, published in 1791, was popular in Europe. Many of his illustrations are now housed in the Natural History Museum, London, in fact. Americans, on the other hand, chuckled at his flowery prose and disdained his sympathy for Native Americans. Yet one American apparently liked his work. Thomas Jefferson read Bartram's book and invited him to participate in the Lewis and Clark expedition. Unfortunately, by the time he received the offer, Bartram felt he was too old and frail to go with the explorers.

Though he was a generation older than Lewis and Clark, Bartram had a sensitivity that would not reappear in naturalist writings until the 20th century. He once wrote of an orphaned bear cub "appearing in agony fell to weeping and looking upwards, then towards us, and cried out like a child." A child of the Enlightenment, Bartram became a follower of the Romantic movement, and his natural history writings inspired Romantic poets such as Coleridge and Wordsworth.

Some modern historians have speculated that William Bartram suffered from clinical depression as a young man, and his recurring self-doubt may have been responsible for his reluctance to accept honors or a high-profile position. Depressed though he might have been, Bartram enjoyed a long life and became known for his hospitality to visiting naturalists, and his generosity to his friends. He shunned the acquisition of wealth and fame, and gave away just about all that he owned before he died. In 1823, William Bartram breathed his last in his own garden, probably the place where he most wanted to be.