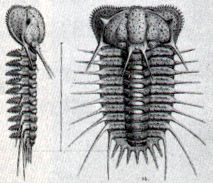 Before the first dinosaur ever walked on land, millions of marine crustaceans scuttled across the ocean floor. When threatened, these weird water bugs could roll up like pill bugs. Some grew long spines, to discourage predators, or perhaps to keep themselves from sinking into the soft mud of the sea floor. Others deliberately burrowed beneath the mud, their eyes protruding up to the surface on the ends of stalks. These creatures first appeared in the fossil record in the Cambrian Period, over 500 million years ago. They were among the first animals to evolve mouths, legs, heads, and eyes (made of calcite crystal). They went completely extinct at the end of the Paleozoic, so by the time the first dinosaurs evolved, these water bugs existed only as fossils.

When first discovered in the 17th century, these animals were called "flatfish." Today, they are known as trilobites for the three lengthwise lobes that divide their bodies. The man who named many of them was Bohemian paleontologist Joachim Barrande.

Many investigators have contributed to our knowledge of these primordial creatures, but to none are we more deeply indebted as to M.J. Barrande, who has enriched with marvelous details his great work upon the "Silurian System of Bohemia."

This praise came from an American geologist, Alexander Winchell, in 1870.

From "Burrowing Trilobite Caught in the Act" by Fatka and Szabad

From "A Moment from Before 365 Ma Frozen in Time and Space" by Błażejowski, Gieszcz, Brett and Binkowski

Barrande happened upon his calling when he found trilobite parts on a Sunday stroll. Employing talented artists, he produced beautifully detailed illustrations of trilobites throughout the 19th century. (He also studied mollusks and corals, but trilobites were apparently his favorite.) Through meticulous study, Barrande uncovered how trilobites grew. Baby trilobites did not look like miniature adults. Instead, they moulted throughout their lives, and added body segments in their early moults. Considering newly hatched trilobites were often as small as the head of a pin, Barrande's research could not have been easy.

Naming trilobites wasn't Barrande's only contribution to geology. Tutor to the grandson of Charles X, the king of France, he settled with the family in Prague while they were in exile in the early 1830s, and took up geological investigations. He noticed a similarity between the rock layers of Bohemia and those of England, and published Silurian System of Central Bohemia recognizing the Silurian system originally named by Roderick Impey Murchison. Barrande's book described more than 4,000 fossil species, and it continues to be used as a reference book today.

The geologic time scale was very much a work in progress during Barrande's lifetime. He initially referred to trilobites as Primordial because they were the first clear evidence of life in Earth's history. It was later recognized that Primordial was the same as Adam Sedgwick's Cambrian system.

The creatures Barrande so admired continue to charm fossil collectors now. In 2011, a pair of paleontologists from the Czech Republic published a paper on a remarkable find: a trilobite fossil at the end of a trackway. The trilobite species, Agraulos ceticephalus, was one Barrande described in 1846, and it turned up in the Barrandian area he studied. The 500-million-year-old, 3-centimeter-long fossil preserves the trilobite at the end of its final trackway. The marks behind the little water bug might have come from its feet or its mouth. It was indeed a bottom feeder. Whichever the track maker, mouth or feet, the fossil can be given the understandable term of "death march."

A paper published in 2015 captured the moulting process that Barrande uncovered. A technique known as X-ray microcomputed tomography produced a three-dimensional model of Trimerocephalus chopini, a Devonian species, immediately after the act of moulting. Fortunately for paleontologists, sediments preserved both the freshly moulted individual and its cast-off exoskeleton. The researchers described the fossil as "the oldest direct evidence for a moulting episode known from the fossil record."