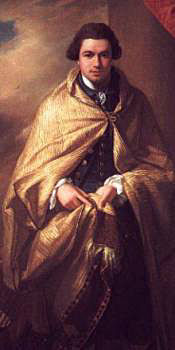 From "The Greening of the Empire: Sir Joseph Banks" by T.H. Watkins

As a boy, Joseph Banks rubbed his face with toads to dispel the myth that they caused warts. Banks has a passion for learning, so long as he was outside the classroom.

Born into a family of wealthy landowners in the mid-18th century, Banks attended the best schools where he was not a diligent student. While he was at Oxford, he spent much of his time managing his property and finances (and partying), though he did hire a botany tutor for himself and his friends. He eventually left the university without a degree but then spent much of his time in the British Museum's reading room.

Banks's family connections served him well, affording him the opportunity to participate in three significant voyages, to Newfoundland, the South Pacific and Iceland. The second voyage, with James Cook on the Endeavour, became Banks's most famous trip. The initial plan was to observe the Transit of Venus but weather interfered. On to the next set of plans, the travelers set out to discover Terra Australis Incognita, an undiscovered landmass rumored to exist in the far south. The voyagers managed to see Tahiti, Bora Bora, New Zealand and Australia, and Banks collected thousands of plant and animal specimens and took them back to Europe.

Long sea voyages were hardly a simple business in his day — of the eight men in Banks's company, only two came back alive. Even for those who survived, the experience could be awfully unpleasant, as Banks recorded in his journal.

Our bread indeed is but indifferent, occasioned by the quantity of Vermin that are in it, I have seen hundreds nay thousands shaken out of a single bisket. We in the Cabbin have however an easy remedy for this by baking it in an oven, not too hot, which makes them all walk off, but this cannot be allowd to the private people who must find the taste of these animals very disagreeable, as they every one taste as strong as mustard or rather spirits of hartshorn.

The privations Banks suffered at sea may have been somewhat compensated for when the travelers reached land, as he observed in Tahiti.

Love is the Chief Occupation, the favourite, nay almost the Sole Luxury of the inhabitants; both the bodies and souls of the women are modeled into the utmost perfection for that soft science idleness the father of Love reigns here in almost unmolested ease, while we inhabitants of a changeable climate are obligd to Plow, Sow, Harrow, reap, Thrash, Grind Knead and bake our daily bread . . .

Whatever landmass he was on, the young Banks appealed to women. Having left a rumored fiancé behind in England, he was quickly offered "all kinds of civilities" by nubile Tahitian girls, but with very little privacy, so he initially declined to "put their politeness to every test." At a large dinner the first night, he ignored the unattractive local queen and instead directed his attention at a sweet young thing "with a fire in her eyes." The queen later had her revenge; when Banks slept in her home one night, she allowed — if not arranged — the theft of all his clothes. Banks had to make his way back to the ship scantily clad. The snubbed queen wasn't the only one amused by the naturalist's embarrassment; the stolen-clothes story somehow followed Banks home to England, where gossips gleefully spread the tale. Despite this mishap, he enjoyed an entrée in Tahitian society that few on the Endeavour shared, partly because of his looks and charm, and partly because, unlike many of his shipmates, the sharp young man bothered to learn more than just a few words of the local language. And in between romancing the local women, he collected animal specimens, botanized and took copious notes.

The trip home was tough. Cook decided to stop in Batavia, now Jakarta, and while they were there, most of the crew members contracted a combination of dysentery and malaria. By the time the Endeavour reached the Cape of Good Hope, nearly half the company had died. When the ship finally reached England, Banks was haunted by the deaths of so many friends, he must have struggled to remember the better times. But he had returned to an affectionate, doting sister. Even better, he had come home a celebrity, though the newfound celebrity apparently went to the young man's head.

Soon after his return home, Banks started planning his next trip on the Resolution, this time intending to bring a 16-man entourage. But his requests for ship upgrades proved so extravagant that they had to be abandoned. As a result, Banks refused to go, and traveled to Iceland instead. Before he pulled out of the Resolution voyage, however, Banks apparently dispatched a sweet young thing to wait for him in Madeira, with the expectation that she'd convince everybody she was a proper member of his entourage (and a man and a botanist). Banks's hasty decision left her disappointed and Captain Cook amused.

After the arduous trips and dramatic romances of his youth, Banks settled down with a respectable wife and his sister at 32 Soho Square, where he became surprisingly sedentary. Having been elected a fellow of the Royal Society at the tender age of 23, before he even embarked for the South Pacific, he was later elected president of the august institution. His home at Soho Square soon became a hub of scientific inquiry, but his health failed. Gout turned Banks into an invalid, and he later had to enjoy science vicariously by sponsoring protégés, including Mungo Park who explored Africa's interior, and Robert Parry, who successfully sailed through part of the Northwest Passage. Banks gave financial and moral support to William Smith in making the first geologic map of England. And it was Banks who sent Captain William Bligh to collect breadfruit on the Bounty, now best known for the mutiny.

Banks oversaw much of England's scientific endeavors during times of war, including the American and French Revolutions, and the Napoleonic Wars. A man of few strong political beliefs and a member of the Republic of Letters, Banks enjoyed the ability to continue correspondence with overseas friends even during such times, simultaneously staying on good terms with King George III and Benjamin Franklin. While England and France were at war, Banks arranged for safe passage to Australia for a French naturalist expedition. But from time to time, he showed a clear interest in beating the French in scientific exploits, whether astronomy, ballooning or exploration. 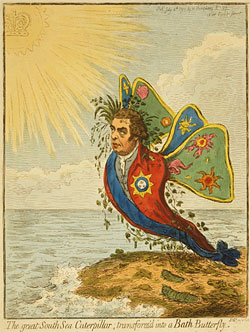 From the U.S. Library of Congress

Banks left England and science a mixed legacy, and to a modern mind, he presents a complicated picture. He was the pinnacle of geniality at Soho Square, but autocratic in overseeing the Royal Society. He once joked about taking a Tahitian friend, Tupia, home "as a pet." He dreamed of vast colonies in Africa. He didn't oppose slavery on moral grounds, but ultimately opposed it on economic grounds. He lobbied to make Botany Bay — one of his most fruitful finds in Australia — a penal colony for British convicts. He liked women, not just as a ladies' man who could sometimes be cavalier, but as a champion of clever women. He helped secure a royal salary for the astronomer Caroline Herschel, and he grieved fiercely over the death of his own sharp, industrious sister. Always interested in aligning the aims of the British Empire and the aims of science, he came to be identified with the crown, and in the 1790s, as the English found the King's regime increasingly oppressive, Banks found his reputation among the public somewhat tarnished. Banks was the longest-serving president of the Royal Society, and when he offered his resignation just a month before his death, it was unanimously rejected. But over the years, critics noticed that under his direction, the complexion of the Royal Society had come to favor connections and wealth over ability and achievement. In his defense, that inclination was pushed partly by necessity. Wealthy men didn't necessarily make good scientists, but they could pay their membership dues. A London writer put into verse what he imagined Banks to communicate to prospective society members:

Untitled members are mere swine:
I wish for princes on my list to shine.
I'll have a company of stars and strings;
I'll have a proud society of kings!

Banks didn't retain his good looks into his old age, but he retained considerable influence over his likeness, which appeared in portrait, engraving and sculpture form. But not every likeness was under his control, and he was occasionally clobbered by caricaturists. Upon his return home from the Endeavour voyage, he was ridiculed as a Botanic Macaroni — an androgynous creature obsessed with fashion and lacking substance. He pushed back with well-crafted likenesses, including a portrait by Benjamin West (top). Soon after the King of England awarded Banks the Red Ribbon of the Order of the Bath, his likeness again appeared in a cartoon (above). The caption read:

New Bath Butterfly ... first crawl'd into notice from among the Weeds & Mud on the Banks of the South Sea . . . it is notic'd and Valued Solely on account of the beautiful Red which encircles its Body, & the Shining Spot on its Breast; a Distinction which never fails to render Caterpillars valuable.

Despite Banks's own wealth and his tendency to award similar aristocrats with membership in the Royal Society, science historian Patricia Fara argues that the caterpillar caricature reflected not so much a populist's anger as a conservative's terror. It was the work of a caricaturist unhinged by the French Revolution, aflutter with worry that the intellectual pursuits of people like Banks would bring similar upheaval to England.

Besides the Royal Society and England's imperial ambitions, Banks also oversaw the Royal Botanic Gardens at Kew. When the Endeavour set sail, Kew cultivated only 600 species; in 1813, it had 11,000, thanks in no small part to his directorship. And perhaps the most important legacy Banks left was the exchange of plants and animals between the Old World and the New. He made this possible through contacts with missionaries, naval officers, tradesmen and diplomats alike. By dispatching seeds and samples all over the globe, he met with mixed results. Often the transplants were a success, but he introduced the occasional disastrously invasive species, too. For better or worse, however, the massive specimen exchange Banks oversaw forever changed the face of our planet.