From Hostage to Fortune by Lisa Jardine and Alan Stewart

Born in 1561, Francis Bacon was neither a paleontologist nor a biologist. He couldn't even be called a scientist considering the term didn't exist yet. Still, Bacon influenced all of science. He once proclaimed, "I have taken all knowledge to be my province," and in his case, it wasn't just an idle boast.

In the centuries leading up to Bacon's birth, human knowledge depended heavily on divine philosophy and Aristotelian logic. While matriculating in France, the young Bacon read the works of an education reformer, Pierre de La Ramée — no fan of the Aristotelians. Bacon ultimately advocated a completely new approach in which human knowledge would be empirically built upon observation and experimentation. His aim was help mankind master nature through discovery and invention. He discouraged scholars and savants from reaching conclusions too quickly, and urged them to gather as many facts as possible. Succeeding generations of Baconian scientists turned away from discerning divine intentions in nature's creations. For better or worse, they instead looked for nature's utility to man. Yet Bacon was not a scientist in the completely modern sense; he was a product of a deeply religious society (some have speculated he was a member of the secretive Rosicrucians, or "Brotherhood of the Rosy Cross"), and believed that the study of nature would restore mankind to the powers enjoyed before the Biblical fall from grace:

For man by the Fall fell at the same time from his state of innocency and from his dominion over Creation. Both of these losses however can even in this life be in some part repaired; the former by religion and faith, the latter by arts and sciences.

By some accounts, the Protestant Bacon also likened Aristotle — a pagan and, worse, a pagan whose teachings had been supported by the Catholic Church — to the Antichrist. By other accounts, Bacon didn't object to Aristotle so much as Aristotelians who refused to accept evidence that ever contradicted what the ancient savant had written.

This most influential of philosophers lived such a dichotomous existence that historians occasionally wondered whether they were studying the same person. Though he was the son of the Lord Keeper of the Great Seal of England, Bacon inherited no real fortune, and spent his life plagued by debt, a problem not helped by his extravagant tastes. His favorite, i.e., most useful, relative was his uncle by marriage, William Cecil, Lord Burghley. Bacon spent much of his youth trying to impress Cecil, but the older man disliked his grasping nephew. Bacon's reputation for ambition survived into the 20th century; in 1941, Caryl Brahms and S.J. Simon published No Bed for Bacon, a comedy about the savant's attempts to buy a bed that had once belonged to Queen Elizabeth, thus proving he was part of the "in" group.

Bacon's lack of egalitarianism affected how he conducted his research. One topic of great interest to him was that of marvels — things outside the ordinary that were attributable to the natural or supernatural. But not everyone's testimony was of equal weight. Just as it worked in the courts of law at the time, one's social standing affected one's credibility. So a so-called fabulous creature or remarkable event observed by a gentleman was far likelier to be accepted as fact in Bacon's world than a marvel observed by a peasant. More understandable to a modern researcher, Bacon also wanted to know whether the person arguing for the existence of something extraordinary had witnessed it him- or herself, or had simply read a broadside or heard a second-hand account. Second- or third-hand accounts were permissible in his view, but only with qualifiers.

Trying to make a comfortable living, Bacon spent much of his life caught up in court intrigue, currying favor with patrons who often had vitriolic differences with each other. He was arguably not the most loyal friend anyone ever had — a protégé of the Earl of Essex, Bacon eventually played a role in the earl's prosecution for treason. Bacon's own reputation suffered in the affair, and he never fully regained the confidence of Queen Elizabeth after the earl was executed, but his prospects improved considerably under the reign of King James I. What is not surprising about Bacon was that he was both a scholar and a government official — he advocated state control of science and condemned "intellectual individualists." 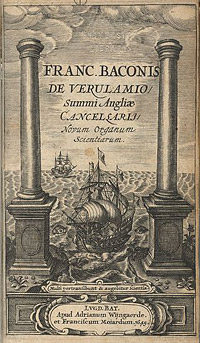 Bacon published The Advancement of Learning in 1605, a work that was perhaps unprecedented in its call for universal education. He published his magnum opus Novum Organum in 1620. Bacon's arguments in this work closely resembled those of his medieval namesake, Roger Bacon. On the one hand, Bacon called for dispassionate observation of nature. On the other hand, he finished his masterwork with lists of topics ripe for future study, and in so doing, assembled some of science's most colorful terminology:

History of the Blue Expanse of Twilight, of Mock-Suns, Mock Moons, Haloes, various colors of the Sun; and of every variety in the aspect of the heavens caused by this medium.

History of the greater Motions and Perturbations in Earth and Sea; Earthquakes, Tremblings and Yawnings of the Earth, Islands newly appearing; Floating Islands; Breakings off of Land by entrance of the Sea, Encroachments and Inundations and contrariwise Recessions of the Sea; Eruptions of Fire from the Earth; Sudden Eruptions of Waters from the Earth; and the like.

Bacon didn't make many significant discoveries of his own, but Novum Organum was a spectacular achievement in that, for all his affection for the upper crust, it democratized science. Prior to his time, advancements in science were the province of exceptional minds enjoying exceptional insights, the kind of thing ordinary people couldn't do. But Bacon laid out a process any diligent person could follow. Science became a process experimenting and gathering data. The properties he said experiments should assess included variation, production, translation, inversion, compulsion, application, conjunction and chance.

Though he didn't have many scientific breakthroughs or inventions of his own, Bacon played a crucial role in deciding which breakthroughs and inventions mattered. Elizabethan England enthusiastically plunged into the business of invention, strongly encouraged by Cecil. Bacon eventually worked in issuing patents, or "royal privileges" for new inventions. Between 1607 and 1617, he oversaw the issuance of patents for inventions as diverse at silver gilding of leather, making copper, making salt, even an "engine for dressing of meal." His main criticism of patent requests was that they lacked originality. He complained about the kind of patent seeker who simply "buffs up" earlier inventions, or "decks them out more elegantly." Like the early-20th-century patent clerk who would develop the theory of special relativity, Bacon might have enhanced his own thought process by examining whether inventions submitted for his inspection really were innovative.

One of Francis Bacon's most popular writings, however, was a utopian work. In 1627, perhaps influenced by Johann Andreae's Christianopolis, he penned The New Atlantis, describing a national scientific institution called Salomon's (or Solomon's) House. The New Atlantis fleshed out ideas Bacon originally touched upon in an earlier work, Gesta Grayorum, a masque (a kind of play) staging a debate between several characters. Subsequent scientists devoted themselves to realizing Bacon's vision, and Salomon's House influenced the later formation of the Royal Society of London. It also influenced the Académie Royale des Sciences in Paris where scholars were expected to work communally. That approach didn't always work out as planned, but some have argued that the French did a better job of realizing Bacon's utopian dream than the English. Bacon's vision for Salomon's House included enhanced plant and animal life for human use — the stuff of genetically modified organisms' adversaries' nightmares.

Bacon's vision for Salomon's House was a combination of specificity and vagueness. While he fleshed out the utopia in sufficient detail to describe the color of savants' underpants (white), he never figured out how the utopia would fit into a larger society — or get financed. Life imitated Bacon's art in that last respect. In a 1594 lecture, Bacon identified four institutions he believed crucial to scientific progress: museums, libraries, botanical gardens and laboratories. Despite trying for years, though, he never succeeded in persuading either Elizabeth I or James I to establish any museums, libraries, botanical gardens or laboratories.

In 1621, Bacon was made Viscount St. Alban's. Later that year, he was charged with accepting bribes as Lord Chancellor, stripped of his viscount status, and even briefly imprisoned. Whether Bacon was truly guilty could be debated considering the people who charged him with corruption were mostly angered that he had ruled against them after accepting their gifts. After his disgrace, he devoted the last years of his life to posterity. He polished his earlier writings for publication and compared himself to Demosthenes, Seneca and Cicero, classical authors who had also fallen from grace. Bacon died in 1626, reportedly from a catching a chill during an outdoor experiment, trying to see whether cold could delay putrefaction in a dead chicken.