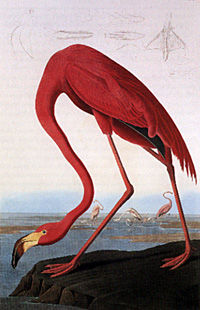 In the 1820s, John James Audubon paid a visit to a phrenologist. All the rage at the time, phrenology purported to measure one's character by measuring one's head. Not only did the phrenologist tell Audubon that his skull resembled that of the great painter Raphael, but also that he was steadfast in his devotion to his wife, affectionate with his children and uncommonly generous toward his friends. Audubon was amazed — not to learn these things about himself since he already knew them — but to see that his fine qualities could so quickly and easily be discerned through simple skull measurements.

Audubon may not have lived up to all of the phrenologist's claims, but there can be little doubt about his artistic talent or devotion to his work. Between 1827 and 1838, he published Birds of America in four volumes showing more than 400 subjects. The format, known as "double-elephant" featured plates roughly 25 by 20 inches in size. Audubon wanted to portray his subjects as big as life, which occasionally meant contorting their long necks and long legs to fit the pages. The American Flamingo, which could measure up to 5 feet, was a particular challenge. He also wanted to mimic the iridescent feathers of the wild turkey, the mallard and the ruby-throated hummingbird, so he used gold leaf or perhaps bronze in his paints.

Audubon was both illegitimate and encouraged to cover up the unfortunate fact, so he occasionally prompted, or at least allowed, rumors of a noble birth. He was actually born in Haiti in 1785, possibly to a mixed-race chambermaid who worked for his father. After Haiti's race relations deteriorated, Audubon's slave-trading father packed the boy off to France. His father's wife, being a very good sport, agreed to his adoption, and she doted on the boy during his father's frequent absences. Once grown, Audubon would be no stranger to slavery — the ownership part of it. He opposed its abolition.

In 1803, Audubon was sent out of harm's way again, this time to America to avoid Napoleon's recruiters. In the United States, he wandered without direction, often in the company of his good friend Ferdinand Rozier. Audubon's father had picked the man as Audubon's business partner, but in terms of running a profitable business, Rozier wasn't a very good influence. The two were supposed to manage a farm purchased sight unseen years earlier, but instead went off on hunting and fishing trips. The farm never did well, so they sold the land and worked as clerks. That didn't hold their interest for very long either, and they wound up boating down the Ohio and Mississippi Rivers selling gunpowder and whiskey. In the middle of all this, Audubon managed to marry his sweetheart Lucy. After a string of unprofitable business ventures, and scraping together an income as an itinerant portraitist, Audubon finally found his ambition: to depict wildlife as realistically as possible. (Too realistically for some. Readers with delicate sensibilities must have cringed at his excruciatingly detailed description of the contents of a newly dead owl's stomach.) 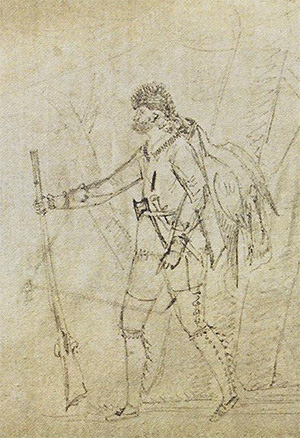 A self portrait of the woodsman, from Explorers' Sketchbooks by Huw Lewis-Jones and Kari Herbert

Audubon's life was tinged with irony. Naming himself "the American Woodsman," he tried to project the image of a rugged frontiersman who had no time to trifle about his appearance, all the while he paid close attention to his appearance. He even sent a self-portrait to an admirer. He anticipated the practice of placing rings on birds' legs to track their movement, marking nestlings with "a light silver thread" and checking on them a year later. He often lamented the quick destruction of the wild — so much that he has become an example for modern conservationists. Yet to paint realistic pictures, he had to shoot hundreds of birds. Because he worked in the wilderness for long stretches with no other food source, he had to eat those birds, too. (He recounted one occasion when he drew a live hawk in his kitchen, and the bird's eye "directed towards mine, appeared truly sorrowful." He released the creature as quickly as he could.) And to bring to life a work about American birds, he had to find many of his buyers in Europe. Audubon spent many years in England, where his books were actually printed. While there, he envied his arch-rival John Gould, who had access to closed circles of British naturalists that Audubon lacked. When Gould departed for a lengthy trip to Australia, Audubon doubted the "indoor naturalist" could handle the strain of living in the wild, but Gould proved him wrong. Meanwhile, Audubon kept documenting more American wildlife, enduring arduous sea voyages across the Atlantic a total of eight times.

In England and America, Audubon often teetered on the brink of financial ruin. In the early 19th century, publishing a book like Birds of America meant finding subscribers beforehand, and those subscribers might lose interest and pull out of the venture at any time. (Given the project's length and the engravers' varying work standards, many subscribers did just that.) And at the time, bankruptcy meant more than losing one's possessions, it could also mean imprisonment. Audubon escaped a lengthy term in debtors' prison but this was largely through enlisting his family. His wife and eldest son dealt with printers, subscribers and various critics while Audubon was off hunting in the wild, and his wife supplemented the family income by teaching. After Audubon's death, she was forced to resume teaching at the age of 70 — and to sell some of the plates he had used to print his books. Not surprisingly, Audubon's long absences and infrequent financial successes strained his marriage. At one point, his wife wrote him that, until he could tell her about something he had accomplished, she didn't much care to see him. 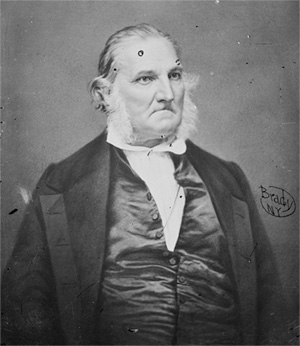 A photograph of Audubon taken about a year before his death, from "Audubobon's Haiti" by Christoph Irmscher in Public Domain Review

Ornithology was a highly competitive field in the early 19th century, and a few of Audubon's rivals attacked him in print, sometimes viciously. Some of their critiques were answered by his son, and some were answered by quoting the great French naturalist Cuvier's description of his work as "the most magnificent monument that has yet been raised to ornithology."

After Birds of America was completed, Audubon continued traveling, hunting and painting, working on a smaller version of Birds and publishing two volumes on North American quadrupeds. But the hard life he had lived took its toll.

As a young man, Audubon had taken great care about his looks, and taken much pride in them as well. "My locks flew freely from under my hat, and every lady that I met looked at them and then at me until — she could see no more," he recalled. He applied bear fat to keep his shoulder-length mane shiny, and when he finally had his "luxuriant" tresses trimmed, he wrote them an obituary. Below his fabulous hairdo, he wore a fringed buckskin jacket to evoke the American wilderness to prospective European subscribers. In his 60s, his teeth were gone and, worse, so was his eyesight. By today's standards, he was very young when he lapsed into senility, resembling, as one friend observed, "a crabbed restless uncontrollable child — worrying and bothering everyone." He was just 65 when he died. Though the man didn't live long, his reputation did. His books were never cheap, but he probably would have been amazed at the value placed on them by modern collectors. In 2002, a Birds of America set sold at auction for $8.8 million.

Narrative text and graphic design © by Michon Scott - Updated May 16, 2022