Aristotle lived when Ancient Greece transitioned from a collection of city-states to an empire. He was born in 384 BC, and because his father was the personal physician to the Macedonian king Amyntas II, Aristotle enjoyed considerable privilege and an exceptional education. He moved to Athens and studied under Plato for 20 years, though Macedonia's saber-rattling left many Athenians eyeing him with suspicion. He left Athens around 348 BC, maybe due to power struggles in Plato's Academy or perhaps because of larger political intrigues. In 343 BC, he was summoned to the Macedonian court; the new ruler, Philip II, wanted a tutor for his son Alexander. When Philip was murdered in 336 BC, Aristotle's former student became king. The following year, Aristotle returned to Athens and founding the Lyceum. 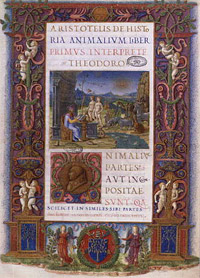 Fifteenth-century Historia Animalium translation by Theodore of Gaza. From the U.S. Library of Congress.

Aristotle was one of the finest biologists ever known, and this proved both a blessing and a curse — his best work advanced science while his mistakes stifled progress.

Whereas Plato had engaged in thought experiments, Aristotle dissected, and pumped contacts for information about bees, livestock, and wild animals. The ideas of Plato and Aristotle often enjoyed opposite fortunes. Plato argued for a better world generally beyond the human senses, and this "more real" world held special appeal in times of violence and uncertainty. Aristotle's confidence in the world we can readily perceive around us fared better in times of prosperity and cultural optimism. Around the time the Roman Empire crumbled, Augustine penned The City of God, rejecting Aristotelian ideas for Platonic ones. Over the next several centuries, Greek and Muslim scholars preserved (sometimes with their own distinctive interpretations) many of Aristotle's works, passing them on to medieval European scholars by the 13th century.

Legend holds that medieval Europe blindly embraced Aristotle's ideas despite the challenges they posed to Christian doctrine, but the reality was more complicated. A series of papal bans in the 13th century forbade the teaching of Aristotle's ideas, though some of the bans acknowledged the utility of his work and allowed it to be studied after "errors" were removed. The Condemnation of 1277, for instance, took issue with his assertion that some phenomena were, by nature, impossible. God, medieval theologians insisted, could do whatever He wanted. Bans were often only regionally enforced; at one point, the University of Toulouse attracted students by advertising that they could learn about the Aristotelian ideas currently banned in Paris. Discussion of Aristotle's work eventually became mandatory in many university lectures. After Gutenberg's invention of movable metal type ushered in a new age of printing in Europe, Aristotle's Natural History counted among the earliest printed books; Johannes de Spira published an edition in Venice in 1469. Decades later, Aldus Manutius founded the Aldine Press in Venice, and put a small army of scholars from all over Europe to compile a five-volume edition, in Greek, of Aristotle's complete works.

Aristotle's writings did not comprise an unalloyed blessing to succeeding generations. One of his better known bits of writing was an oyster recipe — not to prepare them for eating but to actually make them. Aristotle believed that oysters spontaneously generated, perhaps because so many of his contemporaries did. He believed that animal lungs served the purpose of regulating the fire produced by the heart. He probably thought that fossils were inorganic. And he believed in an eternal and unchanging Earth. Although the age of the Earth is immeasurable by human standards, it still had a beginning, and the Judeo-Christian doctrine of creation actually spurred scholars to examine the planet's past — something they might not have done had Aristotle's views prevailed.

Some science historians have argued that Aristotle may have proposed an early theory of evolution, but his biographer Armand Marie Leroi disputes the claim:

Indeed, reading Aristotle, it's easy to suppose that he is struggling towards, or even has, a theory of evolution. He isn't and hasn't. Nowhere in his works does he claim, as Darwin did, that all animals are descended from some remote common ancestor. Nowhere does he suggest that one kind of animal can transform into another.

One of Aristotle's longest-lived ideas was of a scala naturae, also known as the Great Chain of Being, which persisted well into the 19th century. Aristotle realized that many possible classification systems existed for all the organisms on Earth, and he didn't advocate lumping everything into a single system. For animals, however, he did propose an ascending scale with zoophytes at the bottom and humans — specifically Greeks — at the top. Centuries later, the Great Chain would be used exuberantly to emphasize differences between "lesser" and "better" human races. 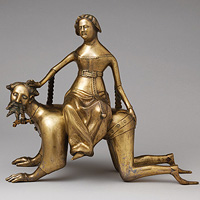 From Aquamanile in the Form of Aristotle and Phyllis © The Metropolitan Museum of Art.

And then there's what Aristotle thought of females. He claimed that a male cuttlefish would remain by the side of a wounded mate but if the situation were reversed, a female cuttlefish would swim off without a backward glance, and even then, the remorseless female cuttlefish exceeded the virtue of the remorseless female human. Adjectives Aristotle applied to women ranged from "immature" to "monstrous." So it's entertaining that a story that persisted about him through the Middle Ages was of his humiliation by the lady love of his student Alexander. Alexander's pretty girlfriend Phyllis reputedly distracted him from his lessons and when Aristotle tried to send her packing, she apparently seduced him, persuading him to carry her on his back. She arranged to have Alexander watch his teacher's disgrace from a window. The duly disgraced philosopher used the incident to warn Alexander away from womanly wiles.

But much of Aristotle's influence is due to what he got right, and his achievements in zoology alone were impressive. He insisted that animals should be studied as "joyfully and zealously" as mathematics. In History of Animals, he described more than 500 animal species, incorporating meticulous observations of their behaviors, and results of dissections. He established the classifications of viviparous and oviparous quadrupeds, as well as marine mammals, birds, fish, mollusks, insects and crustaceans. He struggled, however, to categorize creatures such as seals and bats. Life forms that straddled boundaries particularly fascinated him, including the boundary between plants and animals, and living and non-living. Seals were both land and water animals, bats were both land and air animals, and so on. He pelted fish peddlers and sponge divers with relentless questions. He also included in this work various anecdotes and animal legends, but like those who would follow him, he was passing along what his readers would consider useful information. "All men by nature desire to know," he wrote.

Judged by modern standards, not much of Aristotle's work would be considered rigorous science. Compared to those who preceded him, however, he was remarkable, and there is probably no scientist alive today whose work could, in its entirety, survive unscathed for 24 centuries. Some 2,000 Latin manuscripts of Aristotle's writings survive today. Shortly before he died, Charles Darwin received a copy of Aristotle's book on animal life, and thanked the friend who sent it to him with, "Linnaeus and Cuvier have been my two gods, though in very different ways, but they were mere school-boys to old Aristotle."