In 1668, when Cosimo de Medici visited Jan Swammerdam's curiosity cabinet, the savant dissected a caterpillar for his illustrious guest. To the young Medici's amazement, Swammerdam demonstrated that the caterpillar's body already contained the beginnings of wings of the butterfly it was destined to become. 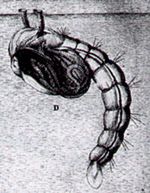 From Cultures of Natural History edited by Jardine, Secord and Spary

Swammerdam carried out his dazzling dissection with the aid of a microscope, still new technology in the 17th century, and he was among the best at it. Others who specialized in the tiny looked at took apart a wide range of organisms and objects, but not Swammerdam. He was all about insects. And in his day, insects could be more than ladybugs and butterflies. The category also included slugs, worms and even frogs. In fact, as far as some savants were concerned, the insect family extended to crocodiles, too.

Swammerdam's microscopic dissection skills enabled him to understand insect development as no one before him had. He realized that the individual insect persists throughout different stages, like the butterfly. He also understood that other types of bugs hatch from the egg in the adult form, and yet others start out as nymphs. He established different "orders" of development.

Swammerdam also noticed differences between males and females of the same species (not necessarily as easy to do for bugs as for people). Although modern biology has identified some female moth species lacking wings, however, few modern entomologists would cite the same reason as Swammerdam:

. . . so that the male can enjoy the sweet refreshments which the free air affords, and ramble at pleasure over the smiling fields and fragrant flowers, when, on the other hand, the care at home, and management of the fruits of wedlock are committed to the female only.

Swammerdam's enthusiasm for bugs was a great service to science, but not to his father. Although well-respected for his own curiosity cabinet, the elder Swammerdam didn't want his son to be inspired by curiosities so much as get a job, and maybe a home of his own. Financial worries and disputes with his family characterized the younger Swammerdam's life. Maybe familial frustrations contributed to a title he chose for a paper he wrote on the mayfly: A Figure of Man's Miserable Life. In marked contrast to his family life, his contributions to science and medicine were stellar, yet he was a man in a constant state of conflict. Swammerdam saw God's glory in much of what he studied, yet he agonized over whether, in studying creation, he was giving insufficient attention to the creator. He was often depressed. He eventually decided to sell his collection, and the Grand Duke Cosimo III offered to buy it at a good price on the condition that Swammerdam oversee a museum installation in Tuscany. Though desperate for money, Swammerdam felt he had to refuse. Later on, he had to sell the collection at a depressed price.

Swammerdam fashioned his own dissection tools and is today regarded as one of the finest at illustrating microscopic marvels. He also pioneered the practice of preserving biological specimens — both in spirits and with injected wax — for later study and display. (His contemporary, Frederik Ruysch, enhanced wax-injection techniques to create some mighty bizarre human anatomy specimens for display.) Swammerdam made key discoveries about human physiology, including discoveries about muscle contraction and respiration.

Swammerdam's discoveries about muscle contraction came from his experiments on amphibians then categorized as insects: frogs. The experiments were often grisly, but he realized that what he called "irritation" — mechanical stimulation of nerves — could induce muscular reactions. He found frogs easy to work with because their nerves were "very conspicuous." His experiments showed that muscles could contract without involvement of the circulatory system. He found that reflexes didn't need any help from the brain. Perhaps most importantly, he found that muscle movement didn't owe anything to "animal spirits," a 1,500-year-old idea dating back to Galen.

Also significant for his time, Swammerdam rejected the notion of spontaneous generation. On the other hand, he founded another notion ultimately proven wrong: preformationism, or the idea that an individual organism contains all of its subsequent generations. Considering debates about the nature of reproduction and generation continued long after Swammerdam's death, his mistake is understandable.

A year after dissecting the caterpillar for his Medici visitor, Swammerdam published Historia Insectorum Generalis, his masterwork on insects. He spent most of the rest of his life working on an expanded publication, The Bible of Nature, later titled The Book of Nature. He completed the manuscript shortly before his death, and entrusted it to a friend for publication. The manuscript suffered a series of misadventures, including a lawsuit, multiple owners, and significant rewriting. The second volume of the work was finally published 60 years after it was written.