When William Smith was born in 1769, people still puzzled over exactly what fossils were. By the time he died, scientists not only knew what fossils were, but — thanks to his efforts — knew how to use them to discern when the rocks beneath their feet had been deposited.

Smith was, at various times, a yeoman, a land surveyor, a mineral surveyor and civil engineer. He had humble origins that limited his opportunities for much of his life. After his father died, he went to live on his uncle's farm where he became fascinated by fossil sea urchins used as pound weights for butter scales, and by the diminutive brachiopods he and his friends used as marbles. The charm fossils held for Smith might have ended there, but when he came of age, England was busily digging for coal, and digging canals to transport it. These activities revealed rock layers that would otherwise be hidden from view, and Smith was lucky enough to be involved in both. Working in a coal mine, Smith learned to see fossils not just as pretty objects, but as something much more scientifically valuable. Science historian John Henry notes that Smith "saw that fossils that looked broadly similar were actually slightly different, depending on which rock strata they were in." What's more, the fossil-bearing rock layers followed a consistent, even predictable sequence. Just like coal mine shafts, canal branches running through neighboring valleys passed through similar fossil sequences. Smith's varied abilities as a freelancer enabled him to travel throughout England and confirm his theory.

In 1798 a map of soil and vegetation types gave him the ingenious idea to make a map of rock formations based on fossils. In 1799, he produced a map of the Bath vicinity, where he lived some of the time. The same year, Smith and two friends — the Reverends Joseph Townsend and Benjamin Richardson — spent an evening naming more than 20 layers of rock strata in the same area. While giving the rock layers colorful names such as Forest Marble and Ditto White, the trio made a remarkable discovery. At the junction between two rock layers named Millstone and Pennant Street, they noticed a distinctive turnover in fossil types. They observed, "Beneath this bed no fossil, shells, or animal remains are found; above it no vegetable impressions." Today, this boundary marks a recognized geologic boundary. The rocks below with "vegetable impressions" belong to the Carboniferous. The layer above belongs to the Permian and Triassic. (The boundary between the Permian and Triassic marks the most catastrophic extinction identifiable in the fossil record.) 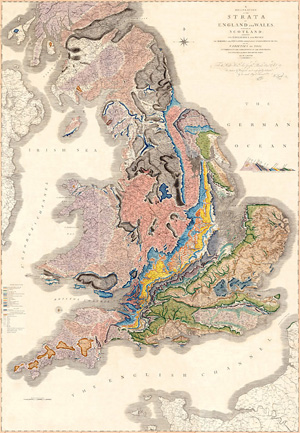 Around this time, Smith conceived a much more ambitious idea: a geologic map of England and a corresponding fossil catalog. The project took years longer than expected, trying the patience of no one less than Joseph Banks. In supporting the project, Banks had eased Smith's access to rare books and papers needed to complete the work. In 1815, Smith finally completed his masterpiece, A Delineation of the Strata of England and Wales with a part of Scotland. The map measured 6 feet by 8 feet and 6 inches, on a scale of 5 miles per inch. Smith wasn't the first person to use fossils to identify rock layers, and others had made geologic maps decades before. But no one had distinguished so many discrete rock formations over such a large area. His ingenious but costly approach involved using color gradations (darker at the base of a rock layer, lighter at the top) to give a three-dimensional effect. He also produced complementary cross-sections of rock layers. His map was an unprecedented achievement.

In the wake of his map and his publications, Smith should have been showered with glory. Instead, he eventually found himself in debtors' prison. To some extent, this was his own fault. After choosing the financially precarious life of a freelancer, and in the midst of an economic recession induced by the Napoleonic Wars, he acquired properties well beyond his means. He bought an estate known as Tucking Mill, even though he rarely got to live there. He acquired an office in Bath. He rented a nice place in London, and after it burned to the ground, he rented an even bigger, pricier home in the same expensive city. He chose to build a small railroad from just-opened Kingham Fields Quarry to his own newly built stone-sawing mill, but the man who knew so much about fossils didn't realize the quarry would turn out substandard rocks nobody wanted. He took a young wife who suffered from a variety of physical and mental illnesses. He also took in his nephew John Phillips who would later become an outstanding paleontologist in his own right, but who was, at the time, likely a financial burden. Phillips later lamented:

Would that . . . he had left to others the completion of his work, and devoted himself for a time to even the humblest of those professional labours by which he had been at least supported [and not] in following up discoveries which no living man could reasonably hope to complete!

Yet Smith's financial ruin was also the result of something he couldn't control: his lowly birth.

George Bellas Greenough was an affluent gentleman (whose wealth had come from an ungentlemanly apothecary grandfather) serving as the first president of the Geological Society of London. Smith wanted to be a member of the society, but membership was by invitation only, and Greenough wasn't about to invite a man of such pedestrian origins. Several years before Smith completed his geological map, Greenough and his minions paid Smith a visit, reviewed his work, and apparently resolved to make a competing geologic map. They also resolved to sell their map at a lower price. The result was that they undercut Smith's sales and pushed him over the brink of bankruptcy. For a time, Smith postponed the inevitable by selling his fossil collection to the British Museum to pay off his debts — hence the name in his publication . . . specimens of the original geological collection in the British Museum. For Smith, this sacrifice was especially cruel. He had always intended to display his fossils in conjunction with his map, as supporting evidence, but in their new home, the fossils were kept out of site. And selling the collection wasn't enough to save his finances; he was still arrested and sent to prison for 11 weeks in 1819, though not before he produced a few catalogs of his beloved fossils. To make the engravings, Smith enlisted the capable illustrator James Sowerby, who died in 1822. 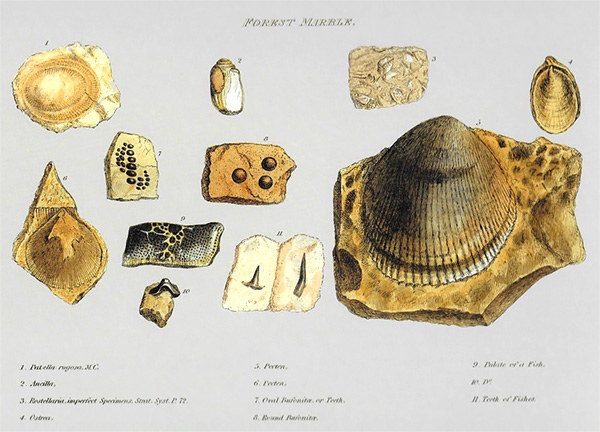 Jurassic-age fossils from Smith and Sowerby's A Stratigraphical System of Organized Fossils. Smith and Sowerby published the engravings on colored paper that matched the color coding used in Smith's map. From William Smith's Fossils Reunited by Wigley, Darrell, Clements and Torrens.

The battle between Greenough and Smith was partly scientific. Some historians have argued that the earliest years of the Geological Society of London were dominated by a Baconian philosophy of empirical observations entirely free of theory. Smith couldn't produce his map without any theory, and Greenough eventually found he couldn't produce his map without any theory, either. In a way, Greenough paid Smith's map the ultimate compliment: He stole it. Working with an associate of Smith's, John Farey, Greenough acquired Smith's materials while evidently claiming his map would be for internal Geological Society use only. Greenough's map actually improved upon Smith's, but given Greenough's superior financial resources — thanks to the backing of the Geological Society — as much could be expected. Greenough defended his map's eerie similarity to Smith's by explaining that they were, after all, describing the same rock layers. Although he didn't necessarily convince many people, his name remained on the Geological Society's map until 1865.

After his release from debtor's prison, Smith headed north, wife and nephew in tow. As Phillips later wrote, Smith "surrendered with deep regret his interest in the much-loved and really valuable little property near Bath, quitted London, and consented to have no home." It wasn't a completely ruined existence, though. By the mid-1820s, Smith was a sought-after lecturer for a variety of local philosophical societies, especially around Yorkshire. In fact, he kept up his lecturing obligations even when illness forced him to be carried into the classroom. And he never lost his enjoyment for studying strata. He is actually credited with coining the term "stratigraphy."

In 1831, the Geological Society of London finally awarded Smith the Wollaston Medal, perhaps the ultimate honor for a geologist. Ironically, the belated award was probably motivated as much by politics and economics as by genuine admiration. Smith's work was important not just because it allowed scientists to discern ancient worlds, but also because it was economically valuable. Nineteenth-century England continued to be powered by coal. As coal is essential the fossil remains of ancient swamps, fossils play an important role in locating the burning black rock. Roderick Murchison, another gentlemanly scientist, had found a geologic formation that he believed preceded the appearance of any land plants, and consequently any coal. By identifying such a formation using Smith's principles, Murchison could advise the "less informed" mineral geologists (Smith's own social equals) against drilling for coal where it wouldn't be found. And although the Geological Society awarded Smith a medal, it still didn't invite him to join. He probably couldn't afford the membership dues anyway.

For all the strengths of Smith's research, later geologists found a flaw in his thinking. Fossils can indeed serve as indicators of a certain span of geologic time, but they result not just from the period in Earth's history, but also from the particular environment. An ocean bottom, a sandy beach and a forest floor all leave different kinds of fossils. As geologists came to realize that different environments could coexist at the same time millions of years ago, just as they do today, they refined Smith's work.

Whatever the various motivations of the award, Smith spent his final days a happy man, perhaps a little unaware that newer geologists had outpaced him. "Mr. Smith mixed too little with younger geologists to make the discovery, that on the road which he opened were racers swifter than himself," observed Phillips after his uncle died. Yet, Phillips continued, if Smith still were alive, "no voice would be louder in their praise, no heart throb with higher delight at every fresh triumph of their toil."

By the time he received the Wollaston Medal, Smith had settled in Scarborough, used his geological knowledge to improve the area's water supply, and designed and helped organize the Scarborough "Rotunda" Museum, which still stands today, and houses part of Smith's original fossil collection sold the British Museum. After settling in Scarborough, Smith also recommended optimal building stones for the Houses of Parliament. The financial security that had eluded him for so much of his life finally came in the form of a lifetime pension awarded by King William IV. And at least some of the specimens of his beloved fossil collection — 200-million-year-old, mother-of-pearl-coated ammonites — count among the "treasures" displayed at the Natural History Museum, London.