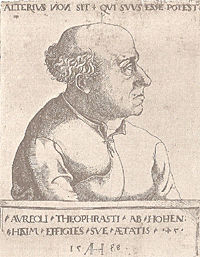 From The Devil's Doctor by Phillip Ball

[T]he stubble on my chin knows more than you and all your scribes, my shoebuckles are more learned than your Galen and Avicenna, and my beard has more experience than all your high colleges!

The author of this little diatribe was Philip Theophrastus Aureolus Paracelsus Bombastus von Hohenheim, better known simply as Paracelsus. For a long time, legend (understandably) held that the word "bombast" got its meaning from this man, but the meaning actually derives from a type of tree bark that can puff up in a similar fashion. (His nickname, however, meant "better than Celsus.")

Paracelsus was born in the village of Einsiedeln, Switzerland, in 1493. His mother died while he was still a boy, and some historians have speculated that she might have suffered from a mood disorder and even taken her own life, though no one knows for sure. Despite his prickliness with most people, Paracelsus was unusually sensitive towards the mentally ill, and a mother suffering from such a condition might explain that. Paracelsus traveled with his father to a different town, and not long after, he set out on his own for an education. He visited more than one university to complete his studies, and this was not uncommon at the time. Although his parents named him Theophrastus after the Classical botanist, he held little regard for Classical scholars later in life, preferring to start from scratch. He associated often with "common" people like midwives and laborers to learn what they knew. The reverse snob even showed up to deliver an inaugural university lecture (in German, not Latin) wearing a leather work apron. His critics (and there were many) accused him of getting most of his education in taverns. After he started roaming as a boy, Paracelsus never stayed in one place for long, and his travels took him throughout Europe. It's possible he saw Africa and Asia as well, but the evidence of this is scant.

Paracelsus was a contemporary of Leonardo da Vinci, Michelangelo and the great humanist Erasmus. Modern lovers of Renaissance art and experimentation might be tempted to think that Paracelsus lived at a wonderful time, but in fact, for most Europeans, the times were fairly horrible — even more horrible than what Europe had witnessed during much of the Middle Ages. Warfare was on the rise, both in scale and frequency, fueled in part by religious strife of the Reformation. Protestants, who scorned the superstitious notions of Catholics, introduced demons of their own, and frightened their newly acquired flocks into submission. Old, familiar social structures were crumbling, and new, frightening diseases were sweeping across the continent. The threat of famine was ever-present. Life spans were short and often painful, and doctors could do little more than draw blood and exact a fee. Paracelsus himself was a doctor who often clashed with others in his profession.

Some historians have credited Paracelsus with kick-starting modern chemistry, but that was not really the case; the world he lived in was too different from our own for him to have practiced anything resembling modern science. He subscribed to astrology (like everybody else) and believed in the doctrine of signatures — the idea that a plant could cure ailments in the body part it vaguely resembled. He even published instructions for resurrecting a dead chicken from its ashes, and claimed that a human could be artificially manufactured, too. When he made notes of his alchemical ideas, he used cryptic codes to keep unenlightened readers in the dark, where he felt they belonged.

Paracelsus's world was filled with magic. One of his books, for example, was entitled On Nymphs, Sylphs, Pygmies and Salamanders. These beings were water people, air people, Earth people and fire people, respectively. He figured they didn't have souls, but had compassion and intelligence like humans — as well as the same capacity for mischief. The idea wasn't uncommon at the time; miners commonly believed that pygmies, or gnomes, brought both good and bad fortune underground. Magic played a major role in European life, and Paracelsus's enemies frequently accused him of practicing the dark arts. In a way, they had good reason to level the accusations; Paracelsus boasted about his healing powers, even his access to Kabbalahic wisdom. Even if his "magic" wasn't real, he believed in it as much as anybody.

Just as it was filled with magic, Paracelsus's world was drenched with religion. He likely wrote more books about theology than about nature, and at one point walked away from medicine altogether to ponder theology in the wilderness. In his work De Pestilitate, he not only criticized the "liars and purveyors of false doctrine" of Galen in the medical schools throughout Western Europe, but also argued that they compared unfavorably to biblical prophets. He quarreled often with Catholics but never converted to Protestantism. Sooner or later, his individualistic spirituality offended just about everybody.

Despite his own pseudoscientific beliefs, Paracelsus did challenge many notions of the time, especially the age-old belief in humors. Blood, phlegm, black bile and yellow bile drove health and personality, doctors maintained, and an excess of one of these humors caused illness. People with an excess of blood were sanguine: cheerful, healthy, able to work hard, but not necessarily the sharpest tools in the shed. People with an excess of yellow bile were choleric: skinny, jaundiced, and prone to sudden outbursts. Those with lots of phlegm were (naturally) phlegmatics: calm — so calm they were almost too lazy to scratch themselves. Those with too much black bile were melancholics: depressed, but great poets. One solution to fix one's "complexion" was diet. Another was bleeding. Paracelsus disdained this idea, and offered the novel suggestion that illnesses can arise from outside the body. He pioneered chemotherapy, the treatment of disease with chemical medicines. (Regrettably, his medicine cabinet included mercury, antimony and even sulfuric acid.) Perhaps more importantly, Paracelsus recognized that the body could often do a good job of healing itself. While other healers ground eggshells into oozing wounds, he advocated keeping the wound clean and otherwise leaving it alone. Compared to modern techniques of surgery and antibiotics, this might not have been hugely successful, but compared to ground eggshells, it was progress. Centuries before the widespread use of anesthesia, he discovered that ether could render people unconscious. Not surprisingly, a considerable demand developed for Paracelsian medicine.

Besides a healer, Paracelsus was an alchemist, one who tried to transmute one kind of substance into another. He argued, for instance, that immersing a ruby in red oil would, in time, improve its quality so much that it could emit light. The most popular application of alchemy was to turn a metal such as lead into gold. That didn't interest Paracelsus so much as its potential medicinal uses, though he played along with the occasional request to try to make gold out of something less valuable. He believed all substances were made of three essential parts: volatile (Mercury), inflammable (Sulphur), and saline (Salt). Despite pseudoscientific ideas of their own, later savants, including Robert Boyle, refuted Paracelsus.

As conflicts — over theology, territory and the nature of matter — raged around him, conflict likely raged within Paracelsus as well. He often identified with peasants, deriving much of his knowledge from the likes of blacksmiths and midwives, yet he didn't necessarily think common people could be trusted with important information. And if Paracelsus appears conflicted about class, that's nothing compared to his apparent confusion about women. On the one hand, in an age rife with misogyny, he insisted that while women were different from men, they weren't exactly inferior, and women's diseases ought to be studied and treated. On the other hand, he believed in and feared feminine demons who could seduce a man in his sleep. Passing through the town of Strasbourg several years after an epidemic of compulsive dancing — a situation possibly explained by chronic stress and malnutrition in a population already disposed to superstitions about vengeful saints — Paracelsus described the epidemic's first (female) victim as a lewd troublemaker who'd started dancing to humiliate her hapless husband who "had asked something of her which she did not want to do." Paracelsus himself was said to be celibate all his life, and rumors have long raged about why a man, especially one who never took religious vows, would take neither a wife nor a lover.

Part of what raged in Paracelsus must have been a kind of guilt hard to relate to today. Medieval philosophy had long held that it wasn't man's place to question the workings of God or nature; to do so was to try placing oneself above the divine. Paracelsus constantly tried to understand nature, but guilt over this may have eaten away at him. The famous psychiatrist Carl Jung hypothesized that this inner conflict drove Paracelsus into a recurring behavior pattern: (1) arrive in a new place, (2) earn accolades, (3) enjoy accolades, and (4) initiate self-destruction. A classic example occurred in the town of Basel (or Basle). Paracelsus showed up and wooed plenty of prospective students. Then he gave a lecture to local doctors, promising beforehand that the lecture would uncover the "greatest of medical secrets." The secret turned out to be his belief that the process of digestion was the ultimate form of alchemy. He chose to illustrate his talk with a pan brimming with a steaming pile of stinky pedagogical aid. The enraged doctors stormed out of the hall as he shouted after them, "If you will not hear the mysteries of putrefactive fermentation, you are unworthy of the name of physicians!" After other controversies in the town, including reputedly tossing a text by the Persian polymath ibn Sina (Avicenna) into a bonfire and telling onlookers they should ignore "little books of men," Paracelsus finally saw fit to move on. It wasn't the only time he left a town and plenty of dry-eyed townspeople behind him. In Salzburg, he nearly got himself hanged in a peasant uprising.

Among the people who eventually tired of Paracelsus were some of his disciples who spent many hours in his company. After he died, one former follower observed:

While he was living I knew him so well that I should not desire to live again with such a man. Apart from his miraculous and fortunate cures in all kinds of sickness, I have noticed in him neither scholarship nor piety of any kind. . . . The two years I passed in his company he spent in drinking and gluttony, day and night. He could not be found sober an hour or two together, in particular after his departure from Basel.

When he died, Paracelsus left behind screeds of unpublished polemic, and a small band of followers soon set to work copying and disseminating his books. It wasn't an easy job; rumor held that this chronic equal-opportunity offender dictated his tomes while drunk. One of the best popularizers of his ideas was Peder Soerensen, also known as Petrus Severinus, a Danish doctor who practiced for a time in Venice. He rewrote a lot of Paracelsus's German rants in respectable Latin, making them understandable to a much wider audience in the late 16th century. Paracelsus himself died in 1541, only in his late forties. All sorts of rumors flew of his dramatic death (a bar brawl, perhaps, or even poisoning), but he likely died in his bed, hopefully in visited by one or two friends.