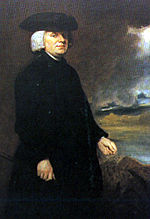 From Darwin and the Science of Evolution by Patrick Tort

In crossing a heath, suppose I pitched my foot against a stone, and were asked how the stone came to be there, I might possibly answer, that, for any thing I knew to the contrary, it had lain there for ever: not would it perhaps be very easy to shew the absurdity of this answer. But suppose I had found a watch upon the ground, and it should be enquired how the watch happened to be in that place, I should hardly think of the answer which I had before given, that, for any thing I knew, the watch might have always been there. Yet why should not this answer serve for the watch, as well as for the stone? Why is it not admissible in the second case, as in the first? . . . [W]hen we come to inspect the watch, we perceive (what we could not discover in the stone) that its several parts are framed and put together for a purpose . . .

So argued William Paley in his Natural Theology published in 1802. It was a supplement to his 1794 book Evidences of Christianity, which chronicled historical evidence for God's love. In Natural Theology, he made the case that the design of the universe testified to the existence of an intelligent designer. Moreover, Paley insisted that life was unfailingly harmonious and happy.

It is a happy world after all. The air, the Earth, the water, teem with delighted existence. In a spring noon, or a summer evening, on whatever side I turn my eyes, myriads of happy beings crowd upon my view.

Even a wild creature chomped to death by a predator was lucky to at least avoid a lingering death. Such a joyous world couldn't come about by chance, only by providence. The kind creator Paley envisioned brought order to the universe and intended for humans to recognize and appreciate that order. In his view, goodness and happiness were the same thing, as were suffering and evil. Nature itself was a moral treatise. Paley's optimism deserves some admiration; he wrote Natural Theology while suffering from terminal intestinal disease.

In his autobiography, Charles Darwin recalled Paley's work, praising his clear, concise writing style and describing Paley's writings as one of the best parts of Darwin's own education. At the time, Darwin was in fact quite orthodox, later recounting, "I did not then in the least doubt the strict and literal truth of every word in the Bible." Darwin did not, he later admitted, think much about Paley's premises at the time, instead taking them "on trust." That trust later disappeared. Darwin eventually concluded that the writings of Thomas Malthus provided more reliable, if less reassuring, evidence. He determined that far more offspring are produced than can possibly survive, and competition for resources shapes living organisms. Darwin voiced his doubts.

We behold the face of nature bright with gladness, we often see superabundance of food; we do not see, or we forget, that the birds which are idly singing round us mostly live on insects or seeds, and are thus constantly destroying life; or we forget how largely these songsters, or their eggs, or their nestlings, are destroyed by birds or beasts of prey; we do not always bear in mind, that though food may be now superabundant, it is not so at all seasons of each recurring year.