Legend has it that while the country doctor Gideon Mantell was visiting a patient, his wife Mary Ann took a short stroll as she waited for him, and when Mantell finished his house call, she presented him with a puzzling tooth. In fact, this account can't be confirmed since Mantell didn't record at the time just how he acquired the tooth, and gave conflicting accounts later. What's certain is that the tooth was unlike anything he had ever seen. It was typical of an herbivore. Could it belong to a mammal? Mantell was confident that it came from Mesozoic strata, and there were no Mesozoic mammals known to science in the early 1820s. Even today, there are few known Mesozoic mammals of significant size, and Mantell's tooth was huge. 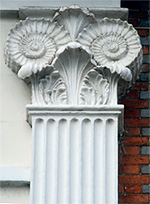 Born the son of a cobbler, Mantell lived in Lewes, a small country town. He did everything a doctor could be expected to do, including a frightening amount of bleeding for apoplexy, but his specialty was obstetrics. At a time when 14 women died for every 1,000 births, the dedicated Mantell only lost two patients in 2,400 deliveries.

Outside his demanding medical practice, Mantell found time for geology. Although the animal associated with the odd tooth would ultimately prove to be among his greatest contributions to science, it was hardly his first. When he started digging fossils, all the known fossil assemblages from Cretaceous England were marine, but Mantell found remains of terrestrial and freshwater ecosystems that he named the Strata of Tilgate Forest. He began finding bones of gigantic animals as early as 1820 and published his first book The Fossils of South Downs in 1822. His friend Charles Lyell later encouraged Mantell to narrow his focus and concentrate on fossil reptiles and fish.

After finding the puzzling tooth, Mantell showed it to other scientists, but they all dismissed it, the great Cuvier initially attributing it to a rhinoceros. Cuvier's dismissal was a blow to Mantell's confidence, but ultimately he remained firm: This tooth, along with other remains he found, belonged to a giant herbivorous reptile. In convincing other scientists of this, he had to demonstrate that the tooth was from Secondary (Mesozoic) strata. Through careful study of the rock layers, Mantell did just that, but members of the Geological Society of London saw little reason to listen to him. Discouraged but persistent, Mantell sent Cuvier more teeth and persuaded the French savant to reconsider his earlier decision. Cuvier did, and Mantell proudly took his letter to the Geological Society's next meeting. In the words of Dennis Dean, Mantell's biographer:

What a pleasure it must have been for him to confront his former critics, who, more than two years earlier, had sneered at his epoch-making fossils and, rather openly, at himself — the nonuniversity son of an unlettered shoemaker. Now all that was changed, for Gideon had done more than win Cuvier's sanction or approval. Almost singlehandedly, and despite the virtually unanimous disapproval of his most esteemed colleagues, he had persuaded the French authority to change his mind, yet so graciously that Cuvier had willingly recanted in public.

Years later, Mantell recounted, with no small amount of pride, Cuvier's words: "These teeth are certainly unknown to me; they are not from a carnivorous animal . . . Do you not agree that it looks as if we have here a new animal, an herbivorous reptile?" Still, Cuvier's words alone didn't settle the matter. At that time, herbivorous reptiles (extinct or modern) were virtually unheard of in England. Mantell visited the Hunterian Museum where he found the tooth of a modern iguana — and a modern analogy. He envisioned the animal as a scaled-up iguana and eventually estimated its length at 100 feet. Richard Owen later overturned his interpretation with a mammalian articulation on four strong legs. Then Mantell overturned Owen's mammalian articulation, after discovering enough fossil evidence to show that the dinosaur's forelimbs were much shorter than its hind legs. Later paleontologists adopted a kangaroo-like stance for the fossil, but Mantell's interpretation — that the animal was at least partially bipedal — is the view that has withstood the test of time. Mantell also demonstrated that fossil vertebrae Owen had assigned to different species all belonged to Iguanodon.

Mantell was invited to consult on dinosaur sculptures erected at London's Crystal Palace Park, but he refused, disliking the commercial aspects of the whole venture. By the time giant sculptures were unveiled in 1854, he was dead, yet his findings lived on; Iguanodon's forearms, scales, tongue and horned snout all resulted from his work. 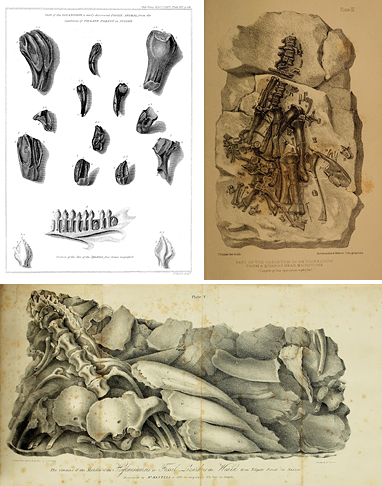 In 1825, Mantell published Notice on the Iguanodon, a Newly Discovered Fossil Reptile, from the Sandstone of Tilgate Forest, in Sussex. Perhaps because he had been snubbed for so long by the Geological Society, he had the paper read at a meeting of the even-more-prestigious Royal Society. The paper was an instant success. Mantell was soon elected a Fellow of the Royal Society, and made an honorary member of the Institute of Paris.

In the midst of Iguanodon glory, Mantell wrote books, including Fossils of the South Downs and Illustrations of the Geology of Sussex. They were attractive books with unattractive prices. In the equivalent of today's dollars, they cost roughly $1,000 apiece, and they sold poorly. In the 1830s and 1840s, apparently having learned his lesson, he produced more modest books aimed at more middle-class readers.

Early publishing disappointments aside, with Iguanodon, Mantell "arrived." But success often comes at a price. He began feeling too far away from the action in Lewes and in 1833 moved his family to Brighton. The decision proved disastrous.

In his first popular lecture in Brighton, Mantell assured the local physicians that he wasn't there as a rival, then gave local prospective patients the somewhat contradictory assurance that his geological studies wouldn't detract from his dedication as a doctor. The prospective patients didn't believe him, and he never established a successful medical practice there. His finances became so desperate that the town's council finally "saved" him by turning his big house into a public museum. Admission cost a shilling, about half a day's wages for a laborer or servant. Setting up the museum in his home left one room for Mantell and no room for his family; they had to move. Though the Mantells may have stayed together from time to time, Mary Ann left her husband for good in 1839. Not long afterwards, one of their sons moved to New Zealand, and one of their daughters died of tuberculosis. Ironically, the museum in Brighton ultimately failed, and Mantell had to sell off the collection anyway. Perhaps even worse, he found himself upstaged by Richard Owen.

Though they started out on friendly terms, Mantell and Owen became bitter enemies over the years, squabbling over pterosaurs, Mesozoic birds and moas, along with dinosaurs. Owen even tried to prevent the Royal Society from awarding Mantell the Royal Medal. After introducing the world to Iguanodon, Mantell discovered Hylaeosaurus, an ankylosaur and the most complete dinosaur fossil found by the early 1830s. Other dinosaur discoveries included Cetiosaurus and Pelorosaurus. His discoveries had linked his name with the Age of Reptiles for two decades. But by establishing the Dinosauria, Owen effectively made the "terribly great reptiles" his own.

Along with his family and much of his fame, Mantell's health deserted him, too. A carriage accident injured his spine so badly that he was plagued by constant pain, and eventually by crippling deformity. Ultimately the accident cost Mantell his very life — in a desperate attempt to dull the pain, he accidentally overdosed on opiates in 1852.

Besides Iguanodon, Mantell's contributions to science were legion. He was one of the independent discoverers of Megalosaurus, the dinosaur identified by William Buckland. Iguanodon never measured up to Mantell's biggest estimate, but his fossil find of Pelorosaurus — the first discovered brachiosaur — did, though the sauropod's true size wasn't appreciated until after Mantell's death. In contrast to his nemesis, Richard Owen, Mantell maintained that dinosaurs had fast metabolisms, able to be active at any time of day or night. Mantell speculated that traces of microscopic life would be found in "Azoic" rocks deposited before the Cambrian Period, a speculation since proven correct. He also discovered several dozen vertebrate and invertebrate fossils. While William Buckland delivered lectures to only a handful of students, Mantell could pack an auditorium full of several hundred people to hear his lecture titled "On a Frog and a Pebble." Despite his ill health, he continued to take pleasure in his work with fossil reptiles, writing numerous scientific papers and eight books.