When Charles Darwin embarked on the Beagle, he took with him a book written by Charles Lyell: Principles of Geology. In the book, Lyell made the argument for gradualism (or uniformitarianism), the idea that present-day geological processes can explain the history of the Earth. When Lyell introduced this concept in 1830, it was a controversial idea; many people relied on the story of the biblical flood to explain the Earth's features, though most of Lyell's gentlemen-geologist colleagues did not. Many of them believed that the ancient planet had been much hotter and wetter than the present, with more dramatic geologic processes.

The frontispiece to Lyell's Principles of Geology showed the Temple of Serapis in Italy. At the tops of the stone pillars were dark bands, made of holes drilled by mollusks. Lyell showed the picture to make a point: The pillars had been constructed above ground, later been submerged under water, and finally lifted above sea level. Considering these changes had happened during recorded history, the same geological processes could, during prehistoric times, build mountains, valleys, canyons, and all the other features we see today. In fact, Lyell devoted the first two of his three-volume Principles of Geology to the effects of natural processes occurring during recorded human history.

Mount Etna provided Lyell with more evidence of the slow pace of our planet. In between lava layers, he found thick layers of oysters, meaning that the time span between lava flows was significant. And lava flows had built Etna to a height of more than 10,000 feet. Indeed, Lyell wrote about aqueous processes that eroded rock, and igneous processes that produced more rock, as the principal forces shaping landscapes. 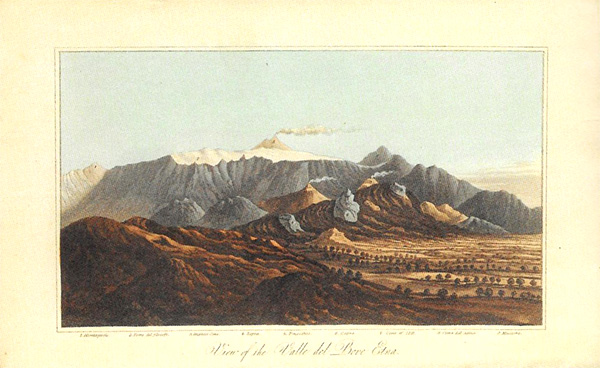 In 1831, King's College, London, awarded Lyell the geology chair. He lasted just three years there. The Church of England dominated the institution's thinking, and Lyell wanted to "free the science from Moses." Early on, Lyell wearied of the naturalist William Buckland's teachings due to Buckland's biblical interpretation of geology. Perhaps a more practical concern was that geology lectures were extracurricular, meaning he could expect little income. He turned to authorship, and by the late 1830s, had become president of the Geological Society.

Some modern historians have argued that the way Lyell portrayed his intellectual rivals, the catastrophists, was unfair. He accused them of looking to supernatural causes of landscape features, but many of them did no such thing; they simply suspected that events like earthquakes had happened on a larger scale in the geologic past than at present. In fact, using the present to explain the past, as Lyell recommended, is an approach that must be used with caution. Extrapolating from a single year or even a century may not work — such a short time span isn't likely to reproduce all the events that have shaped the landscape. Extrapolating from longer time spans is more effective.

Early on, Lyell had a strong influence on Darwin, who later remarked to Lyell's father-in-law, "I always feel as if my books came half out of Lyell's brains." Lyell was impressed with Darwin's work in the field of geology. Upon hearing of Darwin's theory of coral atoll formation, Lyell reportedly broke into a joyful dance. But Darwin's theory of evolution was a different story. Lyell only reluctantly accepted the theory of evolution, finally acknowledging the theory in the 10th edition of Principles. Fo much of his life, Lyell maintained a steady-state view of the Earth and its inhabitants, arguing that as one species went extinct, another appeared. This was partly because of his belief in a long-standing, deep division between humans and animals, in which mankind's superiority to animals was moral, not physical. Between the time he published Principles of Geology in the early 1830s, and Antiquity of Man in 1863, Lyell changed his views. In the first book, he agreed with Cuvier that no humans predated the current epoch. In the second, he extended humanity's existence back in time. His acceptance of Darwinian evolution and human prehistory weren't the only times Lyell had to surrender his beliefs; he also came to support Louis Agassiz's theory of the Ice Age, when gigantic ice sheets covered much of the northern hemisphere in the Pleistocene epoch. Lyell withheld his support of Agassiz's theory for decades, because it stood in direct opposition to his own hypotheses of a steady-state Earth. 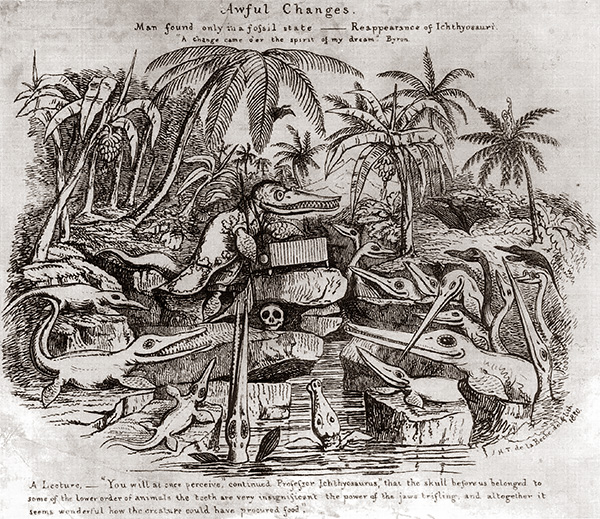 In addition to uniformitarianism, Lyell's Principles of Geology contained some ideas that seem absurd today, though they struck him as quite reasonable at the time. Lyell concluded that, because the Earth undergoes periodic changes in climate and because animals are adapted to certain climates, "huge Iguanodon might reappear in the woods, and the ichthyosaurs in the sea, while pterodactyle might flit again through umbrageous groves of tree ferns." This suggestion invited derision from the academic community, and Henry De la Beche caricatured Lyell in his cartoon Awful Changes (sometimes assumed to be directed at William Buckland).

"You will at once perceive," continued Professor Ichthyosaurus, "that the skull before us belonged to some of the lower order of animals, the teeth are very insignificant the power of the jaws trifling, and altogether it seems wonderful how the creature could have procured food."

Of Lyell's social views, some have aged better than others. He depended on the support of his wife, whose interest in geology and ability to sketch rock formations served his career well, but in keeping with the time, he generally didn't admit women to his classroom. Visiting the United States, he was deeply impressed with its religious tolerance and universal education, and he discussed education reform with Prince Albert.

His views on African Americans are harder to tolerate.

Visiting a Georgia planation in the early 1840s, he sympathized with his slave-owning host's fears about whites being outnumbered by the darker-skinned human beings they owned, and even agreed that abolitionist books ought to be banned for the slave-owning class's safety. He later wrote in his Travels:

[N]early half the population of Georgia are of the coloured race, who are said to be as excitable as they are ignorant. Many proprietors live with their wives and children quite isolated in the midst of the slaves, so that the danger of any popular movement is truly appalling.

He also opined that the slaves struck him as carefree and "better fed than a large part of the labouring class" back home. It may be hard to accept that the so-called father of geology expressed the same slaves-didn't-have-it-so-bad argument now popular in far-right, racial-grievance rants, but it's possible to say a little bit in Lyell's defense that can't be said in the 21st century. In the 1840s, the "labouring class" back home included Victorian England's poorest citizens, who were trapped at the bottom of a rigid class hierarchy, and could neither work their way out of poverty nor vote. Still, the sympathy with slave owners was a bit much for Lyell's friend Darwin, who wrote that Lyell's views gave him some sleepless nights. He suspected Lyell had been a bit too swayed by antebellum southern hospitality.