I have had several gentlewomen in my house, who were keen on seeing the little eels in vinegar: but some of 'em were so disgusted at the spectacle, that they vowed they'd ne'er use vinegar again. But what if one should tell such people in the future that there are more animals living in the scum on the teeth in a man's mouth, than there are men in a whole kingdom?

By the time he reflected on the abundance of "little animals," Antoni Leeuwenhoek had discovered an entire world of life invisible to human eyes, a remarkable achievement for a man with so few prerequisites for scientific greatness. He had no formal scientific training, hardly any education at all. But he was fascinated by what specially ground lenses could show him.

Leeuwenhoek was born in 1632 in the Dutch town of Delft. His father was a basket maker at a time when the Dutch exported so many goods that well-made baskets were in great demand to carry the merchandise. While he was still a boy, two of his siblings died, soon followed to the grave by their father. His mother eventually remarried and, perhaps because her new husband didn't want many children underfoot, sent the young Antoni off to boarding school, next to live with an uncle, and finally to an apprenticeship with a cloth merchant in Amsterdam. The young apprentice soon began examining fabric with the use of a convex lens, and perhaps that got him hooked on lenses.

Leeuwenhoek returned to Delft and married Barbara de Meij in 1654. The couple had five children but only one, Maria, survived childhood. Barbara herself died after only 12 years of marriage. Several years later, he married Cornelia Swalmius, a spinster from a well-connected family. Like Barbara, Cornelia preceded Leeuwenhoek to the grave. Though twice widowed, he survived to the age of 90, cared for by his devoted daughter.

One of Leeuwenhoek's thumb-sized, single-lens microscopes, from "The Unseen World" by Nick Lane in Philosophical Transactions of the Royal Society B

Through the deaths of his children and wives, Leeuwenhoek kept observing minute objects. Around 1660, he got himself a job as a chamberlain for the Delft sheriffs (similar to today's judges). His duties included maintaining their meeting hall, and a perk of the position was that he could take home leftover coal, which he likely used to melt glass and make bead lenses for his microscopes. In fact, to make such lenses, all he really needed was a thin glass rod and a burning wax candle. Leeuwenhoek is believed to have made more than 500 single-lens microscopes, though only nine of them are known to exist in modern collections, and one of those is missing its lens. Of the microscopes retaining their lenses, magnification power ranges from 69 times to 266 times, and letters he wrote suggest he might have made lenses capable of magnifying 480 times.

Besides dexterity in preparing specimens for examination, the microscopist may have had another asset: myopia. His letters mention needing spectacles. If he really was nearsighted, that may have helped him better see objects close to his eye, and his single-lens microscope had to be used in that fashion. Though he could examine unbelievably small objects, he couldn't dissect them — a disadvantage of his device compared to the compound microscopes of the day.

Microscopes of varying quality had been in use for a while by the time Leeuwenhoek started making his own, but the instruments were still new enough that he surely counted among the first people to see many of the things he saw. He marveled at the iridescence of silk fabrics, but likely frowned at the crudeness of human-made objects. When it came to the "little animals" he saw in water, he described them as "above a thousand times smaller" than cheese mites. He was perhaps the first person to observe red blood cells in a living body — flowing through a tadpole tail. He realized that capillaries were the link between arteries and veins. He saw the crystals that induced misery in gout sufferers. He studied dozens of insect species. Asked to examine cochineal — a New World dyestuff guarded so closely that Spain's rivals couldn't tell whether it was animal, vegetable or mineral — he initially guessed it was a dried black currant, but upon later examination recognized the bug bits. He carried along one of his microscopes on a trip to England, and examined specimens from the famed chalk cliffs. To his surprise, he found the "globules" comprising the chalk were rarely white.

The trip between the Netherlands and England was a surprisingly easy one. This is surprising in part because tensions between the countries ran high, sometimes escalating into open warfare. But the tensions didn't prevent collaboration between the British and the Dutch. Leeuwenhoek's observations soon attracted the attention of the Dutch diplomat Sir Constantijn Huygens. In 1673, the English and Dutch were at war, but that didn't discourage Huygens from writing Robert Hooke, a member of the Royal Society of London, to introduce Leeuwenhoek. Like many of his fellow Englishmen, however, Hooke disdained the efforts of a foreigner, and refused to answer Huygens's letter. Undaunted, Huygens wrote another Royal Society member, Henry Oldenburg. Partly because he was responsible for the Royal Society's correspondence, and partly because he liked to stir up controversy — especially where Hooke was concerned — Oldenburg gladly answered Huygens and apologized effusively for Hooke's bad manners. It proved to be the beginning of a fruitful correspondence between Leeuwenhoek and the Royal Society, one that lasted nearly 50 years, in which Leeuwenhoek produced hundreds of papers. Even Hooke eventually came around. To his great credit, he devoted months to replicating Leeuwenhoek's observations, and even started learning Dutch to better understand Leeuwenhoek's writings. 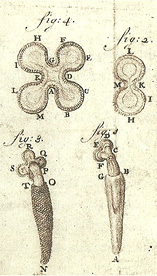 Leeuwenhoek didn't exactly make it easy for others to replicate his findings. He admitted that he wouldn't impart his methods to others. After all the work Hooke had to invest in replicating Leeuwenhoek's observations, he made a point of describing his own methods for the benefit of others, perhaps as a bit of a swipe at Leeuwenhoek. Hooke may have had reason to swipe. A 2021 study using neutron tomography to examine the shape of Leeuwenhoek's powerful lenses found a resemblance to the very lenses Hooke described in 1678. The study authors wrote that Leeuwenhoek's "secrecy about his lenses was motivated by an attempt to conceal his indebtedness to Hooke."

Instead of sending the Royal Society a detailed account of his methods, Leeuwenhoek sent affidavits from fellow residents of Delft who did manage to see what he saw through the lens. As witnesses, he chose gentlemen, including a notary, barrister and minister. That they weren't naturalists didn't matter. In those days, reliability had more to do with one's breeding than one's scientific training.

Leeuwenhoek's secrecy about his microscope didn't help his posthumous reputation. During the 20th century, the mentality emerged that Leeuwenhoek couldn't possibly have seen what he claimed to see. Modern microscopist and historian Brian Ford begged to differ. While contemporary exhibitions and documentaries showed dim, fuzzy images from microscopes of Leeuwenhoek's day, Ford found that, by adjusting lighting and focus carefully, he could produce images of exceptional detail. Ford could even see algae and protozoa, happily vindicating the 17th-century savant.

When observing pepper, under the assumption that it had microscopic spikes to produce its effect on the tongue (he was wrong, it didn't), Leeuwenhoek made an accidental discovery: tiny organisms, known today as protozoa. (Shown here are rotifers: similarly small organisms, these with parasitic worms.) When the Royal Society was able to reproduce his experiment, Leeuwenhoek became an instant celebrity. Not surprisingly, the self-taught microscopist developed considerable self-confidence. When he first wrote to the society, Leeuwenhoek addressed the recipients as "curious gentlemen dabblers" and showered them with praise. After he was elected a member of the society, he began calling his fellow society members (and by extension himself) as "learned philosophers." He also added the honorific "van" to his surname. Stuff like that rubbed at least one contemporary the wrong way. Jan Swammerdam remarked, "It is impossible to go into a discussion with Leeuwenhoek as he is biased and reasons in a very barbaric way, having no academic education."

Education aside, Leeuwenhoek kept finding little animals everywhere, including "many very little living animacules, very prettily a-moving" in dental plaque. He described some microscopic "animals" as having "two tiny limbs near the head and two little fins at the rear of the body." His observations under the microscope fostered intense debate about the nature of plant and animal generation. Through it all, his doggedness was matched by his lack of squeamishness. He nearly blinded himself once when trying to observe a small gunpowder blast at close range. While studying the development of lice, he situated three adult lice on his calf, put on his stocking over the experiment, and left it there for six days. Removing the stocking, he found more than 80 eggs among his leg hairs. In the words of modern science writer Laura Snyder, "Leaving the eggs on his flesh, he somehow managed to get himself to put the stocking back on." After another four days, he removed the stocking again to find more than 20 young lice. By then, the ick factor overtook him. He threw away the stocking, lice in tow, and rubbed his leg repeatedly with ice. Yet he went even longer periods without changing his socks, to better accumulate inter-toe scum for later study. He expected comparable sacrifices from his wife Cornelia, who had to keep silkworm eggs warm by carrying them in her bosom.

If one had to rank the importance of Leeuwenhoek's discoveries, the winner might well be the discovery of microorganisms. In one letter to the Royal Society, he described a water sample loaded with such a great quantity of "animacules" that "all the water . . . seemed to be alive." (A loyal resident of Delft, he proudly noted that local canal water held fewer of these tiny creatures, but Delft truly was an unusually tidy town.) It was unfortunate that the savants who marveled at the tiny organisms Leeuwenhoek found couldn't grasp their significance in causing disease. Two centuries passed — bringing thousands of deaths from dysentery, cholera, and typhoid — before anyone made the connection between winsome creatures swimming in drinking water and deadly illness.

On October 24, 2016, Google commemorated Leeuwenhoek's 384th birthday with an animated doodle of some of the organisms he spotted, all of them "very prettily a-moving."