"How extremely stupid not to have thought of that!" was Thomas Henry Huxley's reaction to Darwin's On the Origin of Species. Huxley's confidence and candor earned him the reputation as "Darwin's bulldog," boldly debating where Darwin (perhaps wisely) feared to tread. In 1860, before a crowd of about 1,000 onlookers, Samuel Wilberforce, the bishop of Oxford, challenged Huxley to decide whether he preferred to be descended from a monkey through his grandmother or his grandfather. Huxley replied that he would rather be the grandson of an ape than related to a man who misused his intellect on matters of such importance. (True to Victorian etiquette, one of the ladies in the crowd reportedly fainted at Huxley's statement.)

Years later, when Wilberforce died of a head injury after falling from a horse, Huxley described the incident as the first time the bishop's brains came into contact with reality. With equal candor, Huxley remarked of Darwin's book, "Old ladies, of both sexes, consider it a decidedly dangerous book." Although Huxley is often described as the winner of the debate, Wilberforce's supporters swore he won the day.

Given how passionately Huxley defended Darwin, you might think Huxley was an evolutionist all his life. He wasn't. Before Darwin marshaled mountains of evidence for his theory of natural selection, Huxley was critical of "transmutationism," even venturing into the territory of snark.

Among the many efforts Huxley made to defend his friend was founding the X Club — a dinner club of well-known, irreligious scientists dedicated to keeping religion and science separate. Most club members were also members of the Royal Society, and the club coordinated its own meetings with those of the RS.

Despite his nickname, Huxley was shrewd enough to engage in behavior quite unlike that of a bulldog when the occasion called for it. In December 1859, he authored an anonymous review of Darwin's new work in the London Times. Instead of effusing about the work, Huxley exercised restraint, even sounding skeptical of natural selection. But he continued with the observation that Darwin "abhors mere speculation as nature abhors a vacuum." Huxley continued that Darwin's ideas could be subjected to observation and experimentation. The review likely helped the book's sales.

Nineteenth-century society found evolution a little more palatable when it was presented as progress, so that's how Huxley presented it. Darwin didn't completely agree, but didn't contradict his staunch supporter, either. Likewise, Huxley disagreed with Darwin's theory of gradual change and suspected that organisms changed through abrupt leaps. Probably more than Darwin, Huxley realized how much paleontology could offer in understanding life on Earth:

From Written in Stone by Brian Switek

Huxley was quite pleased with American fossil finds of horse evolution. He even drew a small caricature of "Eohomo" riding his "Eohippus."

After the first Archaeopteryx skeleton was found, Huxley recognized its reptilian and avian qualities, as well as the bird-like characteristics of the bipedal dinosaur Compsognathus. According to legend, his insight about bird evolution came to him while carving up the bird his family planned to eat for Christmas dinner one year. In 1868, he publicly refuted Richard Owen's interpretation of Archaeopteryx as "unequivocally a bird" and published a paper titled "On the Animals which are Most Nearly Intermediate between Birds and Reptiles." Yet Huxley's insights on resemblances between birds and dinosaurs did not enjoy widespread, lasting approval for nearly a century.

His Archaeopteryx examination wasn't the only time Huxley refuted, and consequently offended, Owen. Huxley also bested the comparative anatomist's interpretation of skull structure and supposed differences between human and ape brains. By the time Darwin published his fifth edition of Origin, in 1869, Huxley had supplanted Owen as Darwin's go-to expert on comparative anatomy.

Darwin danced around human evolution in On the Origin of Species in 1859, not addressing the topic until 1871 in The Descent of Man. Yet Huxley wrote about human and primate paleontology in Man's Place in Nature in 1863. He examined the similarities between humans and apes and noted that greater anatomical differences separate gorillas and chimpanzees from the lower apes than separate gorillas from people. He also mused, "Is [the philosopher or poet] bound to howl and grovel on all fours because . . . he was once an egg, which no ordinary power of discrimination could distinguish from that of a Dog? . . . Is mother-love vile because a hen shows it, or fidelity base because dogs possess it?"

From Man's Place in Nature by Thomas H. Huxley

Huxley observed few significant differences between Neanderthal fossils and modern humans, then asked, "Do the fossilized remains of an Ape more anthropoid, or a Man more pithecoid, than any yet known await the researches of some unborn paleontologist?" (In fact, the future paleontologist was five by the time Huxley wondered — he was Eugène Dubois.) An Englishman of the 19th century, though, Huxley found Neanderthal fossils to be "wonderfully near" those of modern Aboriginal Australians, while not so near his fellow modern Europeans. In 1865, he opined that the slots near the top of humanity's ladder were "assuredly not within reach of our dusky cousins."

Unlike Darwin, Huxley was no comfortable country gentleman. He was born in a butcher shop and became a doctor's apprentice at the tender age of 13. He later recounted he had a "wild-cat element in me which, when roused, made up for my lack of weight." Like Darwin, Huxley managed to take a life-changing sea voyage, on the Rattlesnake, but only by serving as the ship's doctor. He met his future bride in Australia, but they sweethearts had to remain merely engaged for several years until he earned enough money to support a wife. His fiancé's frail health left him wondering if she'd make it to the altar, but she survived well beyond the wedding.

Throughout his life, the workaholic Huxley labored to support himself and his family, but he was plagued by chronic debt. Sympathizing with working types all his life, he developed a reputation for delivering controversial lectures to working-class audiences. After Huxley visited the United States, the New York Tribune published a special edition with transcripts of his lectures, embellished with illustrations. The publication was priced at 25 cents. 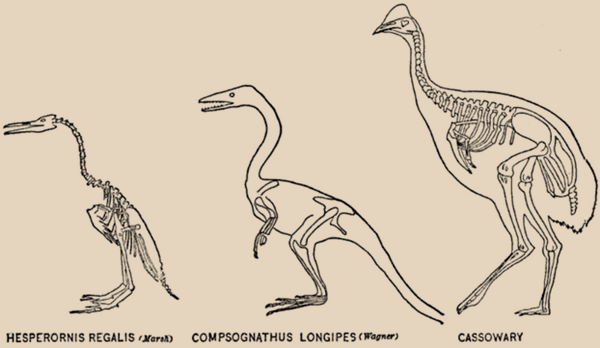 He maintained a complex relationship with religion. Though not religious himself, he lectured on the topic, exhibiting a sound understanding of both Eastern and Western religions. He also coined a new term: "I discovered that one of the unpardonable sins . . . is for a man to presume to go about unlabelled . . . I could find no label that would suit me, so, in my desire to range myself and be respectable, I invented one . . . I called myself an Agnostic." And despite his own lack of religious sentiment, Huxley campaigned vigorously to ensure Charles Darwin was honored by his country and laid to rest in Westminster Abbey.

As Darwin's theory of natural selection gained credibility, some of Huxley's contemporaries began to champion efforts at "improvement" of human society through careful selection. Huxley disagreed, thinking that although natural selection explained how we got here, it hardly provided a responsible model for good governance. He dryly observed:

I sometimes wonder whether people, who talk so freely about extirpating the unfit, ever dispassionately consider their own history. Surely, one must be very "fit," indeed, not to know of an occasion, or perhaps two, in one's life, when it would have been only too easy to quality for a place among the "unfit."