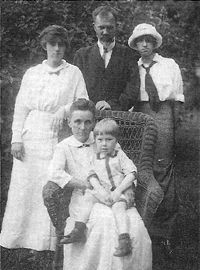 From Davenport's Dream edited by Witkowski and Inglis

If smart farmers could breed better livestock, why couldn't smart scientists breed better humans? A growing segment of America's upper crust pondered this question around the turn of the 20th century, and the movement found a standard bearer in Charles Davenport.

Davenport became the director of the Biological Laboratory at Cold Spring Harbor in 1898, and shortly afterwards applied for funds from the Carnegie Institution of Washington to support his studies in heredity. He had to wait three years for the funding to arrive, but when it did, he resigned his professorship at the University of Chicago and began devoting himself full time to research.

The Carnegie Institution wasn't the only party that supported Davenport financially. Over the years, he courted other wealthy benefactors to support his work although, in satisfying his desire for their money, he had to manage their desires to drive a social agenda. In a 1910 article, "Eugenics, a Subject for Investigation Rather Than Instruction," he described the danger of:

some impetuous temperament who, planting a banner of Eugenics, rallies a volunteer army of Utopians, freelovers, and muddy thinkers to start a holy war for the new religion.

One well-meaning rich amateur he did find quite useful, however, was Mrs. E.H. Harriman, the widow of a railway baron, whom he thanked at the beginning of his Heredity in Relation to Eugenics, published in 1911. In the book, he made his case that the greater good of society could be served by preventing defective humans from reproducing their kind.

In the decades that followed, eugenics marched on, ultimately employing murderous methods under Germany's Third Reich. Davenport didn't advocate killing human defectives, but he did propose long-term incarceration and, later, sterilization. For the age in which he lived, he was hardly an aberration; the eugenics movement enjoyed widespread support across the American political spectrum.

In critiquing Heredity in Relation to Eugenics, modern biologists point out that Davenport actually understood the basics of Mendelian inheritance quite well. But while he occasionally allowed that certain traits must be driven my multiple genes — and pointed out that far more research was needed — Davenport often reduced to an imagined lone gene complete responsibility for characteristics that are today understood to be influenced by multiple genes — often many of them. Human intelligence is likely shaped by hundreds of not thousands of genes. Likewise, diseases such as schizophrenia and bipolar disorder are hardly simple, single-gene problems. These salient facts largely escaped Davenport.

Another problem with Davenport's zeal to remake humanity was that he didn't realize how "problem" genes often go hand-in-hand with genes conferring important benefits. Sickle-cell anemia results from two copies of a gene that, through one copy, bolsters resistance to malaria. New research suggests that close relatives of autistic individuals excel in the fields of science and technology, perhaps because they possess some of the genes that lead to autism. Likewise, a genetic makeup that protects against infection might increase the risk of lifestyle diseases such as diabetes.

Douglas Wallace of the Center for Molecular and Mitochondrial Medicine and Genetics and the University of California, Irvine, points out that the long-term survival of our species may depend on preserving the genetic diversity that Davenport might have hoped to eliminate.

Besides his tendency to reduce nearly every inheritable characteristic to a single gene — and he picked some doozies, such as wanderlust and love of the sea — Davenport also reduced almost every trait a person might express to inheritance. He glibly described families whose members excelled in art, music and literature, apparently without considering that a shared environment of affluence, connections, and access to the best education money could buy might provide a boost. He was equally incautious when it came to bad luck:

Pauperism is a result of a complex of causes. On one side it is mainly environmental in origin as, for instance in the case when a sudden accident, like death of the father, leaves a widow and family of children without means of livelihood, or a prolonged disease of the wage earner exhausts savings. But it is easy to see that in these cases heredity also plays a part; for the effective worker will be able to save enough money to care for his family in case of accident; and the man of strong stock will not suffer from prolonged disease. Barring a few highly exceptional conditions poverty means relative inefficiency and this in turn usually means mental inferiority.

One wonders if Davenport didn't later regret those words. In 1936, his son-in-law died from a fever, reportedly weakened by overwork at Cold Spring Harbor, and left Davenport's daughter Jane a young widow.

Besides assorted defectives in America's backwoods, Davenport fretted at the waves of immigration from overseas. The Irish were mentally deficient drunks tending toward tuberculosis, but on the bright side, they were chaste people who appreciated that the men wore the pants. Germans were thrifty and intelligent. Jews were certainly smart and God-fearing, but quarrelsome, greedy, and lewd. Italians were lazy and lousy at farming. Greeks were slovenly. Davenport concluded:

Summarizing this review of recent conditions of immigration it appears certain that, unless conditions change of themselves or are radically changed, the population of the United States will, in account of the great influx of blood from South-eastern Europe, rapidly become darker in pigmentation, smaller in stature, more mercurial, more attached to music and art, more given to crimes of larceny, kidnapping, assault, murder, rape and sex-immorality and less given to burglary, drunkenness and vagrancy than were the original English settlers.

And what did Davenport think of those descended from sub-Saharan Africans? In fact, he made a surprising concession: The long-ago influx of African slaves to Europe might have infused some dark ancestry into many Europeans families. But to Davenport, when it came to real intelligence, ability, and trustworthiness, people of color were hardly on the map. He published one diagram of a "family of mulattoes" showing a percentage breakdown of the four colors — black, yellow, red, and white — he thought he saw in their skin. Of the lucky mulattoes pale enough to pass for white, he allowed:

So far as skin color goes, they are truly white as their [white] greatgrandparent and it is quite conceivable that they might have mental and moral qualities as good and typically Caucasian as he had.

In fairness to Davenport, he wrote this at a time when anthropologists still debated whether all the human races actually constituted a single human species. Those who argued that they did still believed the races to be separated by vast differences. But even if he could grudgingly compliment the almost-white, Davenport suffered the same vapors from miscegenation as the next person. In 1929, he and anthropologist Morris Steggerda published Race Crossing in Jamaica. The two examined their human subjects with a timed, block-arrangement exercise that bore the memorable name of Knox Moron Test. They concluded:

The general impression made in this comparison of the three groups is that the Whites are relatively swift and accurate, the Blacks are slow but accurate, while the Browns are slow and inaccurate.

Given Davenport's certainty that everything that mattered came down to inheritance, and given his confidence in his own superior breeding, an ironic thread ran through his own life: youthful rebellion against parental authority.

Davenport's mother was doting and indulgent, but his father was puritanical, caring little for his son's dreams of pursuing science. After writing his father a 20-page letter outlining his career goals, Davenport received the disheartening answer that all that mattered was how much money he could make for himself and, perhaps more importantly, his dad. He eventually defied his father and pursued a career in biology.

Davenport married a smart, scientifically inclined woman like himself, and they had three children: Millia ("Billie"), Jane and Charles Jr. When Billie was born, her dad assumed she would be like him: enthusiastic about nature, studious, pious and careful about managing money. The eugenics expert couldn't have been more wrong about his own daughter (pictured with the family above). Adopting androgynous dress in vogue at the time, she became a flapper. She married a fellow bohemian who soon abandoned her for another woman. Then she married a millionaire. To her father's horror, the new groom was a Jewish millionaire with children from a previous marriage. That marriage eventually dissolved, too. Between Billie's failure to make a lasting match, Jane's husband's failure to live up to the eugenic ideal of robust health, and little Charlie Davenport's untimely death from polio, America's foremost eugenicist left behind no grandchildren.

Compared to the man he hired to oversee the Eugenics Record Office, however, Davenport could consider himself lucky. Besides keeping records, Harry Laughlin took up the cause of immigration restrictions with even more zeal than Davenport. A sizeable portion of the American population supported Davenport and Laughlin's eugenic aims throughout the 1920s. Then the Great Depression hit, and plenty of respectable people found themselves standing in soup lines. Maybe poverty had something to do with luck (or lack of it) after all. And it was at this inopportune time that the Nazi-controlled University of Heidelberg awarded Laughlin an honorary medical degree.

If a Nazi-supported degree were Laughlin's only problem, it might not have been so bad, but he happened to possess a mighty embarrassing defect: epilepsy — one of the many deficiencies meriting eugenic sterilization. Laughlin perhaps succeeded in hiding his epilepsy for a time, but he eventually suffered seizures in front of his staff. One seizure struck while he was driving, causing him to crash his car. He was pressed into retirement, and the records office he ran was quietly closed soon afterwards. Loyal if nothing else, Davenport defended Laughlin to the end, writing a eulogy for his friend in 1943.

Over a century after Davenport penned his eugenic manifesto, thankfully few mainstream geneticists agree with him. Johannes Krause of the Max Planck Institute observes that education options, social status and parental income matter as much in life outcomes as genes. As for intelligence, Krause concludes that the definition of intelligence is fluid and depends on what a society values, remarking succinctly, "Intelligence is what intelligence tests measure."

Narrative text and graphic design © by Michon Scott - Updated May 27, 2021