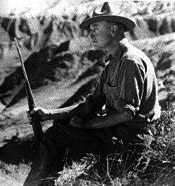 Roy Chapman Andrews titled his autobiography Under a Lucky Star, and luck certainly played an important part in his life. Upon graduating from college, the man sometimes credited with inspiring the Indiana Jones character caught a train to New York and talked his way into a post at the American Museum of Natural History (AMNH), even though no job was available. Andrews volunteered to scrub floors if necessary. When his prospective boss voiced doubt over whether a college graduate would be content scrubbing floors, Andrews reminded him that he wouldn't scrub anyone's floors, just the museum's. He was hired.

Andrews had earned his college degree not far from his boyhood home in Beloit, a small industrial town in Wisconsin. Despite his love for nature, he shared another characteristic with Indiana Jones: a hatred of snakes dating back to his youth. (A garter snake had shown the bad manners to wake him up by slithering through his hair as he slept under the starts one night.)

Once employed by AMNH, Andrews threw himself into his work. Early on, a grisly museum assignment salvaging a whale carcass fired his interest in cetaceans, and he traveled to the Pacific Northwest and later the Orient to study them. But cetaceans would not remain his lifelong passion, nor would his other mammalian studies. Andrews was first and foremost an explorer, and nothing else satisfied him so well.

The young explorer was fascinated with his boss, Henry Fairfield Osborn, and over a lunch in 1920, Andrews proposed that he test Osborn's hypothesis of Asian origins for early humans. He was proposing AMNH's most ambitious project: an exploration of the Gobi Desert. He had already fallen in love with Mongolia's largest city, Urga (later Ulaanbaatar), having visited the country in 1918.

It is a relic of medieval times overlaid with a veneer of 20th-century civilization; a city of violent contrasts and glaring anachronisms. Motor cars pass camel caravans fresh from the vast, lone spaces of the Gobi Desert; holy lamas, in robs of flaming red or brilliant yellow, walk side by side with black-gowned priests; and swarthy Mongol women, in the fantastic headdress of their race, star wonderingly at the latest fashions of their Russian sisters.

Andrews was already a seasoned world traveler when he launched the AMNH Gobi expeditions. He set up housekeeping in Peking (now Beijing) with his family, and made his first AMNH expedition into the Gobi in 1922. More expeditions followed in 1923, 1925, 1928 and 1930. The total price tag for these five field seasons was roughly $700,000, a staggering sum for the time. The personnel and support equipment probably peaked in 1925: 40 people, two trucks, five touring cars, and 125 camels. The expedition headquarters comprised a city of its own inside the Forbidden City, complete with 20 servants.

AMNH illustration of Andrews unpacking a box of fossils while Osborn calls for a camera, from God — or Gorilla by Constance Areson Clark

Andrews proved valuable not just at leading expeditions but at the function natural history museums may value most of all: fundraising. For the first five years, the museum put up only $5,000 a year. He had to raise the rest himself. The American Asiatic Association paid him $30,000 for exclusive rights to publish his stories about the expeditions in the magazine Asia. And he established a subscription service through which he charmed tens of thousands of dollars out of well-to-do natural history buffs.

But in one respect Andrews was not at all successful. His team didn't find the "missing link" in human evolution. They were exploring rock layers tens of millions of years too old. Instead, they found a wealth of mammal and dinosaur fossils. And he concluded that prehistoric people living in the Gobi — "Dune Dwellers of the Shabarakh Usu" — had also collected fossils, namely dinosaur eggs.

Dinosaur eggs were the fossils that garnered the most publicity, and Andrews raised funds for future expeditions through a dinosaur egg auction. The auctioned egg brought in $5,000, and because Andrews and Osborne shrewdly thought to ask member of the public not bidding on the eggs to donate what they could to the effort, they collected another $50,000. Though smart in the short run, the auction proved unwise in the long run. Members of the Mongolian government believed rumors that the egg had sold for $1,000,000. The whole situation led to suspicions in Asia that Andrews's motivation was not truly scientific but monetary, and he found negotiations for subsequent expeditions more difficult.

Life in the Gobi could be dangerous. Armed bandits were a fact of life, and warring factions in Mongolia and China treated each other — and outsiders — with a casual brutality. More than once, Andrews recounted, he narrowly escaped death. Temperatures soared as high as 145°F, alternating with frigid nights, howling blizzards and smothering sandstorms. Andrews's party once killed 47 venomous snakes in a single night when the vipers took refuge from the cold in their tents. And yet Andrews likely embellished his narrative. One member of his crew later quipped, "Water that was up to our ankles was always up to Roy's neck."

However embellished his field exploits were, the strain at home was real. His fieldwork and fundraising trips kept him away from his family for months at a time, and the political instability in China presented risks that rivaled those of the Gobi — risks that his wife and sons sometimes had to face on their own. China was descending into civil war. Andrews's first marriage eventually soured, and his estranged wife moved to England with their two sons.

For Andrews, the expedition decade wasn't pure torture, however. A Jesuit priest and paleontologist Pierre Teilhard de Chardin got to travel with one AMNH expedition, and later marveled at the relative luxury of warm sleeping bags, and jeeps, trucks and camels to haul the gear. When meat ran low, Teilhard recalled that Andrews went off gazelle hunting to feed his crew.

The real star of the expedition, some science historians have argued, was the chief paleontologist Walter Granger, but you wouldn't guess that from contemporary accounts. Pushing cars over rough terrain, toting guns to scare away bandits, and lending his impressive profile for a number of photographs, Andrews (intentionally or unintentionally) built his own celebrity status as surely as he beefed up the museum's collections. After he returned to America, the museum asked him to take over as museum director. Once he accepted, however, his famous luck ran out; the Great Depression left the museum badly strapped for funds, and his personality didn't lend itself to museum administration. Under enormous pressure, Andrews eventually resigned from the director post. He consoled himself with a pleasant retirement and a happy second marriage, and devoted himself to bringing his expeditions and prehistoric creatures to life.

If I plant radishes on my farm near the forest where the Earth is moist and rich, they grow fast and big. A few hundred yards away, across the road, the soil is dry and thin and those from the same seed take twice as long to mature. . . . So it was with our ancestral seeds. Some of them never did make progress, for one reason or another. They became only half-human before their line died out. Others had better luck and eventually reached a human status. But even after the goal was attained by slow and halting steps and they became men of our own species, Homo sapiens, the progress of the different races was unequal. Some developed into masters of the world at incredible speed. But the Tasmanians who became extinct about 1870 and the existing Australian aborigines lagged far behind. Even though we are using submarines, airplanes, and radios, the primitive Australians are still living in the Stone Age, not much advanced beyond the stage of Neanderthal Man.

Illustrations from All About Dinosaurs by Roy Chapman Andrews, drawn by Thomas W. Voter

Illustrations from All About Dinosaurs by Roy Chapman Andrews, drawn by Thomas W. Voter

Andrews described Cro-Magnons in the chapter titled "The Wise Man Appears" and speculated that rouge and hairdos mattered as much to Cro-Magnon women "as to our own wives and sisters."

In 1953, Andrews published a children's book All About Dinosaurs, a book that inspired future paleontologists Phil Currie and Mike Novacek. In it, he recounted his team's reaction to its first fossil find in Mongolia: "We were so excited that we laughed and shouted and shook hands. We pounded each other on the back and did all the things men do when they are very happy." He gave glowing descriptions of many beasts, but for others he had little praise. About Brontosaurus he wrote, "The small brain weighed less than a pound. It shows that the creature was just about as stupid as an animal could be and still live."

As Mongolia adopted Soviet-style communism, Ulaanbaatar lost its charm, taken over by soldiers' drills. When Andrews and AMNH halted the expeditions in the early 1930s, probably no one realized how much time would pass before the museum could return. For the next 60 years, the Mongolia's fossil finds were reserved for Eastern Bloc scientists, including Russia and Poland. In 1990, however, Mongolia invited the AMNH to return, which it did with enthusiasm.