In 1834, in the midst of a terse debate over the nature of sedimentary strata in England, the eminent geologist Roderick Impey Murchison realized he needed some reliable identifications of fossil fish, as well as some stellar support. He turned to an accomplished young scientist and recent winner of the Geological Society of London's prestigious Wollaston medal: Louis Agassiz. Charming as well as talented, Agassiz had persuaded the great Georges Cuvier to entrust him with the task of describing the world's fossil fishes, in Les Poissons Fossiles. This single monograph, completed between 1833 and 1843, increased more than tenfold all formally described vertebrates known to science. 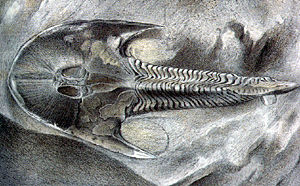 Born in 1807, Agassiz was the first child to survive infancy for a Protestant preacher and the daughter of a local doctor. He spent his earliest years in a Swiss village, but when he was 10, his parents sent him to the College de Bienne. A bright student, he eventually prevailed upon some of his teachers to persuade his parents that he should stay in school rather than become an apprentice, and later that he should pursue a medical degree. Agassiz wasn't really interested in being a doctor; he wanted to be a naturalist.

A university student, Agassiz set up a miniature museum and zoo in the room he and his brother rented. Bringing work home with him — and to the rest of his family — became a lifelong habit. Years later, after he was married and publishing furiously, his first wife would grow weary of sharing her space with artists, engravers and dead fish. She would eventually leave.

Agassiz's first marriage started out with apparent promise. He wed Cecilie Braun, the sister of a college friend. She was young, very pretty, and quite talented. She produced landscapes, portraits, and detailed illustrations of many of the specimens Agassiz studied. But, coming from an affluent family, she was used to a nicer standard of living than Agassiz could provide. They lived in a small, dark, garden-level apartment where the windows looked out on the feet of passersby. Letters to her parents frequently asked for money, and letters written by Agassiz eventually began to allude to someone who "couldn't be pleased no matter what." After Cecilie left him, children in tow, she wasted away from tuberculosis and died in 1848. Agassiz didn't mourn her for long, if at all. He had formed a new family of professional associates and assistants, comprised of some of the same people who crowded his home when his wife left. His new family didn't enjoy much more tranquility than his old one had, and a dispute with at least one alienated assistant ended in noisy accusations of impropriety on both sides.

In the midst of personal and professional squabbles, Agassiz continued to produce. He credited much of his success to the support of his long-time artist-collaborator Joseph Dinkel, who drew most of the plates in Les Poissons Fossiles. The illustration shown above, of a fish submitted for description by August Goldfuss, was done by Goldfuss's collaborator Christian Hohe, and named for Agassiz's personal friend but professional adversary Charles Lyell. The image shown below was illustrated by Dinkel. 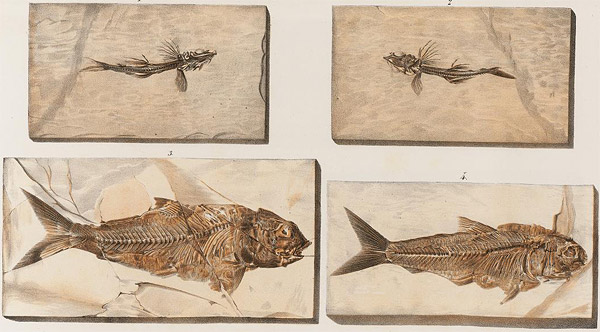 Despite their differences on other issues, Agassiz and Lyell both put their support behind a revolutionary new theory: the Ice Age (as in the Pleistocene). Originally a disbeliever, Agassiz found himself persuaded by Ignace Venetz and Jean de Charpentier that Switzerland had once been buried under a great glacier; he eventually became the indispensable popularizer of their ideas. Later discussions with his old school buddy Karl Schimper fueled his much more extensive and controversial Ice Age theory. (The two would later have a bitter falling out over who truly deserved credit for the idea. It was not the only priority dispute Agassiz ever had.) In 1837, he presented the theory at a meeting of the Swiss Society of Natural Sciences, but the scientific community was not yet ready for the idea, and it would take years before fellow geologists were persuaded. In the end, influential geologist William Buckland declared that anybody who doubted the glacial explanation for scratches on rocks should be "damned to the pains of eternal itch without scratching."

In fact, Agassiz figured out the correct picture, but based on the wrong assumption: He was convinced that the Ice Age had extinguished all life on the planet to prepare it for its present flora and fauna, especially people. He also believed that giant boulders known as erratics, which provided key evidence for the existence of massive Pleistocene glaciers, had not been pushed by the ice but had slid down its surface.

Just a few years after publication of Les Poissons Fossiles and his presentation of the Ice Age theory, financial ruin and a failed first marriage drove Agassiz to the other side of the Atlantic. The Emperor of Prussia granted Agassiz $3,000 for his trip. Once he had been in Boston for awhile, he decided to stay. By the time he disembarked in Boston, though, he was no longer the robust scientific observer he used to be. His role shifted to science popularization.

America brought Agassiz into contact with people he had apparently never encountered before: people of color. Although he counted himself as an abolitionist, Agassiz was repulsed by everything about the black men who waited on him at dinner. He wrote home to his mother:

In seeing their black faces with their thick lips and grimacing teeth, the wool on their head, their bent knees, their elongated hands, their large curved nails, and especially the livid color of the palm of their hands, I could not take my eyes off their face in order to tell them to stay far away. . . . What unhappiness for the white race — to have tied their existence so closely with that of negroes in certain countries!

Agassiz believed in ending slavery and giving blacks some form of legal equality (his opinions varied on this topic), but not social equality. Nothing horrified him more than the prospect of miscegenation.

Conceive for a moment the difference it would make in future ages, for the prospect of republican institutions and our civilization generally, if instead of the manly population descended from cognate nations the United States should hereafter be inhabited by the effeminate progeny of mixed races, half indian, half negro, sprinkled with white blood.

In fact, Agassiz opposed slavery largely because it put white people and black people into regular contact with each other. He was sure everyone would be better off if different races were isolated from each other. But he accepted the fact that centuries of slavery had left his adopted country with a situation that couldn't realistically be undone. He proposed reserving southern states for former slaves, but waffled on whether they should have actual control over the region, eventually deciding that role should be reserved for whites. He spoke frequently on race and in terms of publicity, it was a shrewd decision; people who didn't necessarily care about glaciers or fossil fish nevertheless cared about race relations.

In Europe, Agassiz had popularized the theory of the Ice Age. In America, he proposed something new: polygeny, or separate creations of different races, closely tied to geography. Humans, he maintained, included not just different races, but wholly different species, and there wasn't much question about which race was best. Agassiz's contemporary, the abolitionist and statesman Frederick Douglass, had no trouble seeing the implications of Agassiz's polygenist ideas, and the ease with which the naturalist equated people of color with animals. Indeed, Agassiz noted the correlation of "black" and "chocolate-colored" orangutans and human races on different continents. (To be fair, Douglass just as easily spotted the racial convenience of Social Darwinism.) 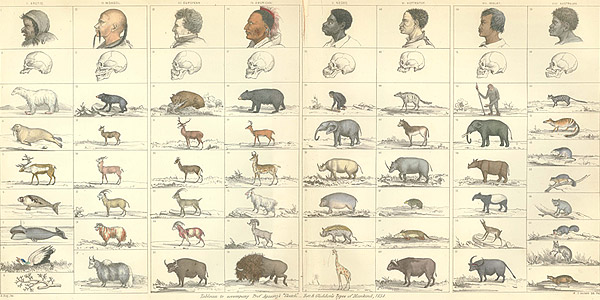 "Tableau to accompany Prof. Agassiz's 'sketch'" from Types of Mankind by Josiah Nott and George Gliddon, 1854

There was more to Agassiz's polygenist philosophy than mere prejudice. The process of classifying living things into different species isn't always straightforward. Some taxonomists are lumpers who focus on similarities and group individuals together. Other taxonomists are splitters, who focus on differences, sometimes minute differences, ending up with more species classifications. Agassiz was a splitter, and this affected his classifications of fishes as well as humans. In his defense, he was hardly alone in proposing that humanity included multiple species. 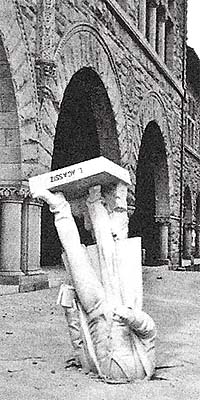 Agassiz's statue at Stanford University, plunged headfirst into the pavement after the 1906 San Francisco earthquake. From Song of the Earth by Elisabeth Ervin-Blankenheim.

Splitting aside, his own remarks speak for themselves. His conviction that blacks had arisen in a different part of the world and from a different Adam than whites won him the unsurprising support of many naturalists in the U.S. South. As for the slaves from Africa and their progeny, the expectation (if not hope) was that they would eventually die out in colder climates, hence Agassiz's suggestion they settle in the South.

In his later years, Agassiz became best known for his staunch opposition to Darwinian evolution. So vehement was his resistance to any discussion of the subject that his students — partly as a joke, partly motivated by irritation over other matters — formed an organization named the "Society for the Protection of American Students from Foreign Professors." When Agassiz learned of the club, he forced the students to leave. Agassiz was especially irritated when his own findings were interpreted as evidence of evolution. He described what he called "three-fold parallelism" — the relationship between comparative anatomy, embryology and geology. Ernst Haeckel cited it as "one of the strongest proofs of the truth of the theory of evolution." Agassiz was nearly apoplectic.

Agassiz's disputes with his students weren't only about evolution. Increasingly insecure, he accused them of plagiarizing his work, even leveling an accusation over a paper he hadn't yet read. He insisted on the right to veto any student's right to publish.

Still certain that the Ice Age had wiped out all life, Agassiz journeyed to the equator looking for evidence of glaciers. He found silt. (In fact, glacial deposits have been found in equatorial regions, but from much earlier geologic periods than the Pleistocene.)

In his later years, however, Agassiz still contributed to science in significant ways. He founded the Museum of Comparative Zoology at Harvard. He helped persuade Abraham Lincoln to form the National Academy of Sciences. His second wife founded Radcliffe College and helped him reach a big audience by acting as his ghost writer. Agassiz's son, Alexander, was also a prominent scientist. Unlike his father, Alexander quietly accepted Darwin's theory of evolution, though he devoted himself (unsuccessfully) to challenging Darwin's theory of coral atoll formation.

In the late 19th and early 20th centuries, Agassiz's opposition to Darwinian evolution and his views on race were hardly disqualifying for admiration among many academics. Stanford University erected a statue of him. Shaken by the 1906 earthquake that leveled much of San Francisco, the statue fell from its perch on the university's Zoology Building and plunged headfirst into the pavement below.